The last weekend in January the R-Phils Dance Team held their auditions for 2012. The squad is the official dance team for the AA Reading Phillies and under the direction of former Philadelphia Sixers and KiXX Dancer Jenn Caputo-Pietrobone. 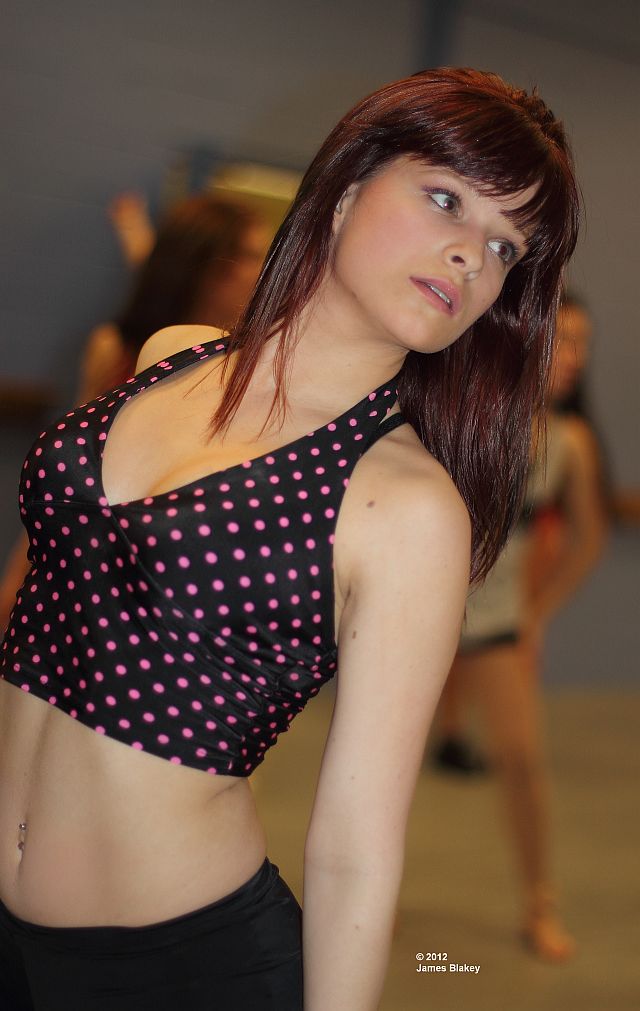 After a long two days of choreography and interviews, thirteen dancers and six alternates were chosen.

This month the team will be get their photos taken for the team website.

The team will make their debut Thursday, April 5th when the Reading Phillies open the season at home.

And then you can catch the R-Phils Dance Team at every Saturday home game throughout the season. 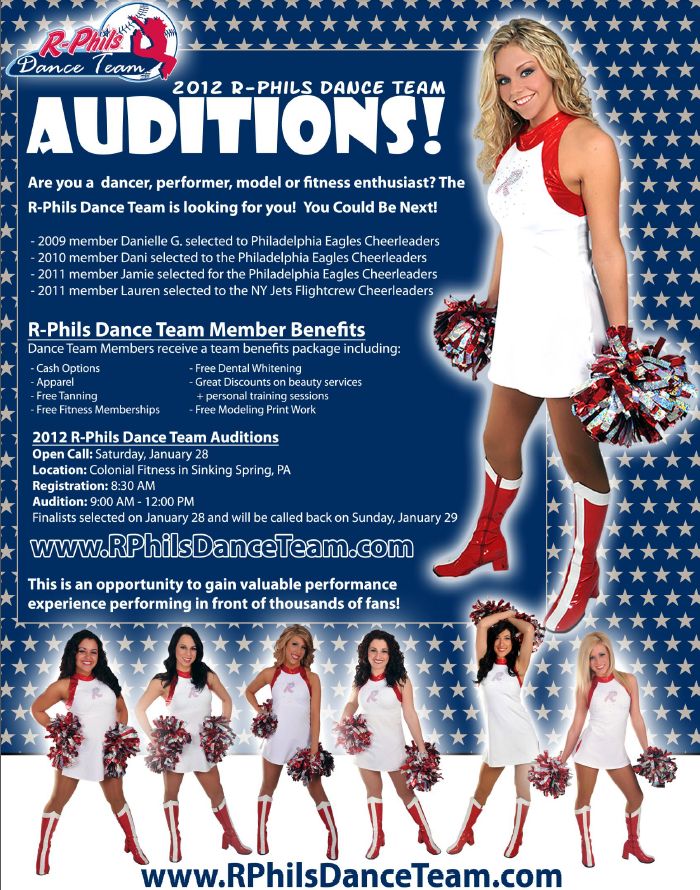 Berks County, PA – Jennifer Caputo-Pietrobone, 32, a professional dancer for the Philadelphia 76ers from 2003 to 2005, started the Academy of Movement in 2007 to coach and direct various local dance teams.

The Bern Township dance studio offers a variety of classes in addition to molding future professionals.

“It has been four consecutive years of coaching that at least one of the members of my team has been selected for either an NBA or NFL cheer or dance team,” she said.

In addition, Caputo-Pietrobone, Spring Township, holds a full-time job at Wilson High School as the health, physical education and dance teacher, where she has been the past 11 years.

“I taught full time when I was dancing with the Sixers,” she said.

The desire to get married, buy a house and start a family prompted her retirement from dancing with the team, but that hasn’t clouded her memory of what she found to be her favorite aspect of being a professional dancer.

As wife to Jarl Pietrobone, 39, who she calls “Super Dad,” and a mother to Jacie, 4, and Jiana, 15 months, she commits most of her weekends to directing and coaching.

“We do everything from choreographing, running rehearsals, deciding on costuming, selecting music – you name it, we do it,” she said.

Alexandra Plank, 23, Spring Township, a studio instructor at the Academy of Movement, helps Caputo-Pietrobone run her “tight ship,” having various roles with many teams.

In addition to directing and coaching the teams, Caputo-Pietrobone also runs the auditions and selects the girls, most of whom have a background in either cheering or dance.

While the semipro teams don’t offer payment, the affiliation can be invaluable for those who want to dance professionally, offering them good exposure.

“The girls have the opportunity on the minor league teams to gain experience for the major league teams,” she said. “That’s the incentive to working for no pay, just for resume experience.”

She is proud of seeing her girls reach the next level in securing spots on professional teams, winning stiff competition among 200 to 400 others who audition.

“It’s absolutely super rewarding to know that they will be able to gain the exposure and the experience of dancing at a professional level,” she said. “To most of the girls, this is a childhood dream of either being an Eagles cheerleader or Sixers dancer.”

(Reading, PA) — The Reading Phillies, the Double-A affiliate of the Philadelphia Phillies since 1967 — the longest affiliation in all of baseball, are pleased to announce that Lauren Timek, a three-year member of the R-Phils Dance Team, has been selected as a New York Jets Flight Crew member. Timek becomes the fourth R-Phils Dance Team member to be promoted to an NFL team since the dance team’s inception in 2008.

“The R-Phils Dance Team has become a staple at the ballpark on Saturdays,” said R-Phils GM Scott Hunsicker. “We are proud to have another member move on to the NFL. We wish her much luck.”

Timek, who made her Broadway debut in 2000, joins Danielle Guldin, Dani Pretti, and Jamie Panghulan, who have all been selected by the National Football League over the past three years. In 2009, Guldin was selected to be a Philadelphia Eagles cheerleader, while in 2010, Pretti was also selected by the Eagles. Earlier this year – 2011 R-Phils Dance Team member Jamie Panghulan was selected to be an Eagles Cheerleader as well.

The R-Phils Dance Team performs at all Saturday home games at America’s Classic ballpark. The team is directed and choreographed by Jennifer Caputo-Pietrobone, the owner of Berks County’s, Academy of Movement Dance Studio – which is located in Sinking Spring, PA. Caputo-Pietrobone has an extensive resume including dancing professionally for both the MISL and NBA, as well as co-creating, implementing and directing the Professional Smokin’ Hot Steam Team (2005-2007), the Wilson High School Dance Team, and the already existing R-Phils Diamond Divas Dance Team.

The Reading Phillies return home to beautiful FirstEnergy Stadium on Friday, May 20, for an exciting seven-day, six-game series. Single-game tickets for all games this season are available now and fans can purchase tickets by visiting readingphillies.com, by calling 610-370-BALL, or by stopping by the brand-new ticket office located at FirstEnergy Stadium. Fans can also add the all-you-can eat Deck Buffett wristband to any order for only $12. R-Phils Tickets — Same Great Price. America’s Classic Ballpark…Just Got Even Better.

Come out and root on your favorite finalist at the R-Phils Dance Team Finals this Saturday at 7:30pm at Building 24 Kitchen & Bar in Wyomissing, PA.

Requirements
· Must be at least 18 years of age by April 1, 2011
· Have previous dance training
· Must submit two photos (head shot and full body shot)-along with application. PHOTOS WILL NOT BE RETURNED (photos do not need to be professional)

Judging
All the judging will concentrate on:
· Dance Technique and style
· Showmanship, personality, and energy
· Physical and personal appearance

The Works in Wyomissing, PA was the place to be last Wednesday, when the 2010 R-Phils Dance Team were unveiled.

END_OF_DOCUMENT_TOKEN_TO_BE_REPLACED

Amanda L. Moreadith wanted the experience again: running onto the field at FirstEnergy Stadium and performing for a crowd of 8,000 Reading Phillies fans.

So, wielding red and silver pom-poms, the 19-year-old auditioned Sunday for the R-Phils Dance Team.

If she’s one of the 18 who make the cut, it would be her second year on the team.

“It just adds a lot of fun to my year,” said Moreadith, who lives in Muhlenberg Township. “I’m a huge baseball fan and the fans are amazing.”

Amanda L. Moreadith of Muhlenberg, center, waits her turn Sunday during auditions for the R-Phils Dance Team in the Fairgrounds Square Mall.

Twenty-six women 18 and older vied for the team spots during a final audition at the Fairgrounds Square Mall in Muhlenberg. College students, a mother of two and a former Philadelphia Eagles Cheerleader were among them.

The names of the women who make the cut will be posted by noon today on the dance team’s page at www.rphils.com. Those who auditioned also could call a hot line Sunday to find out.

Team members receive a stipend of about $200 and sponsorship packages that include tanning, gym memberships and beauty services, such as teeth whitening.