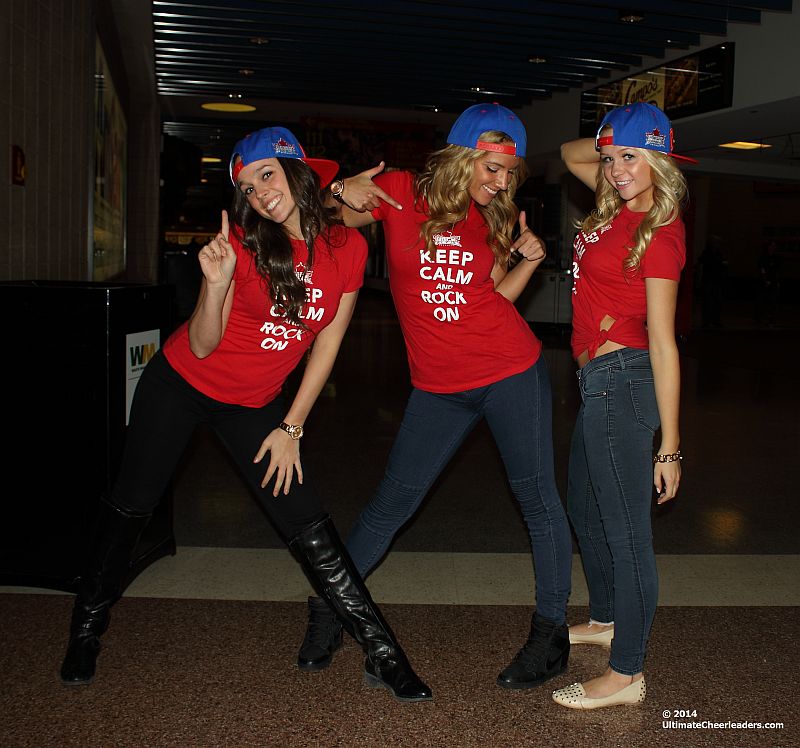 The NLL Toronto Rock Cheerleaders took a road trip last weekend. They left at 11pm Friday night and drove thru the night to Philadelphia arriving at 7am. They hit the sack for a few hours and then were up at 1pm to do some sightseeing. 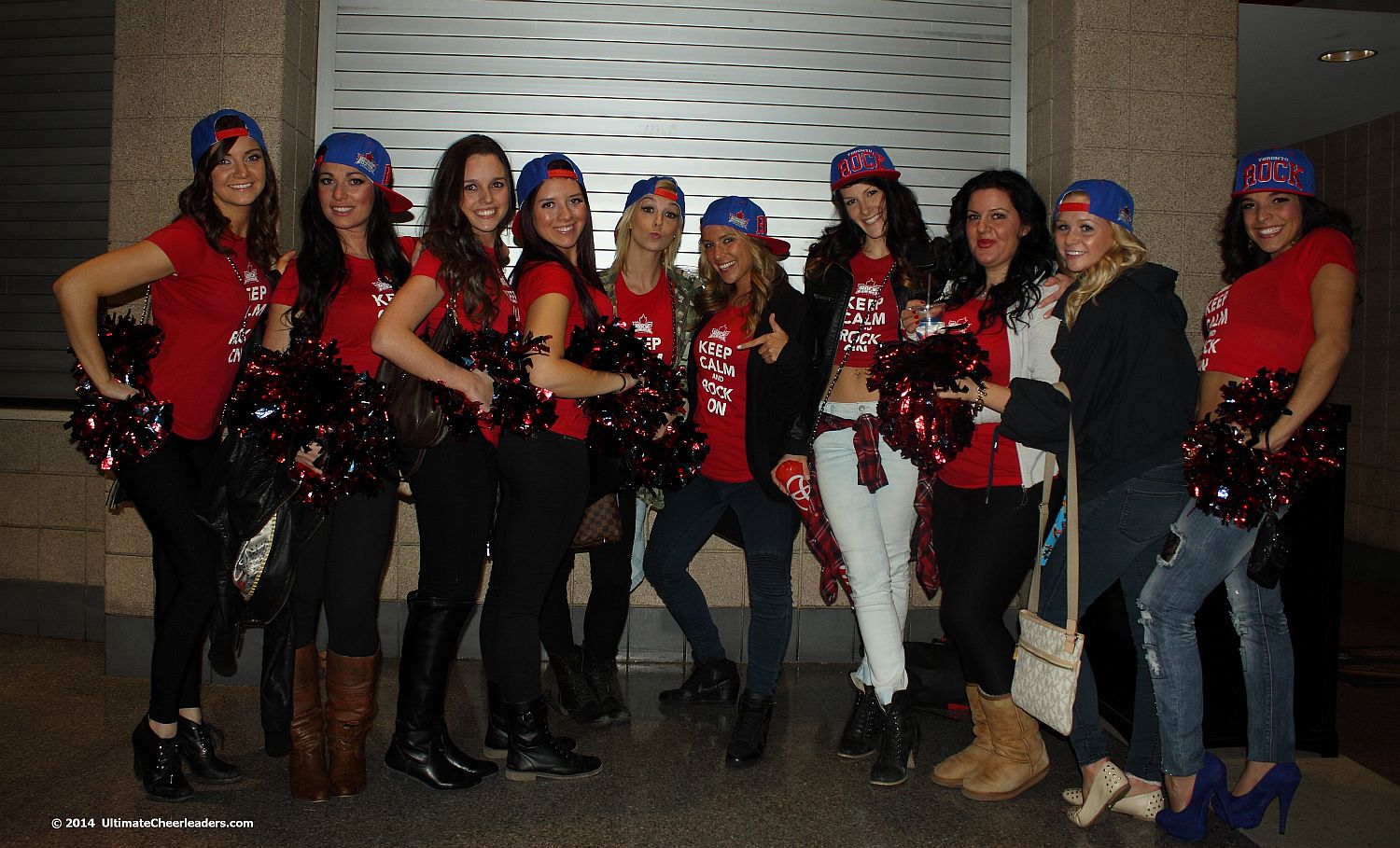 Then after a day of doing the tourist thing the Cheerleaders headed down to the Wells Fargo Center where the Rock were taking on the Philadelphia Wings. It was quite exciting game with the outcome in doubt until the very end when the Wings stopped a Rock 6-5 attack (they pulled the goalie) with just seconds left on the clock. 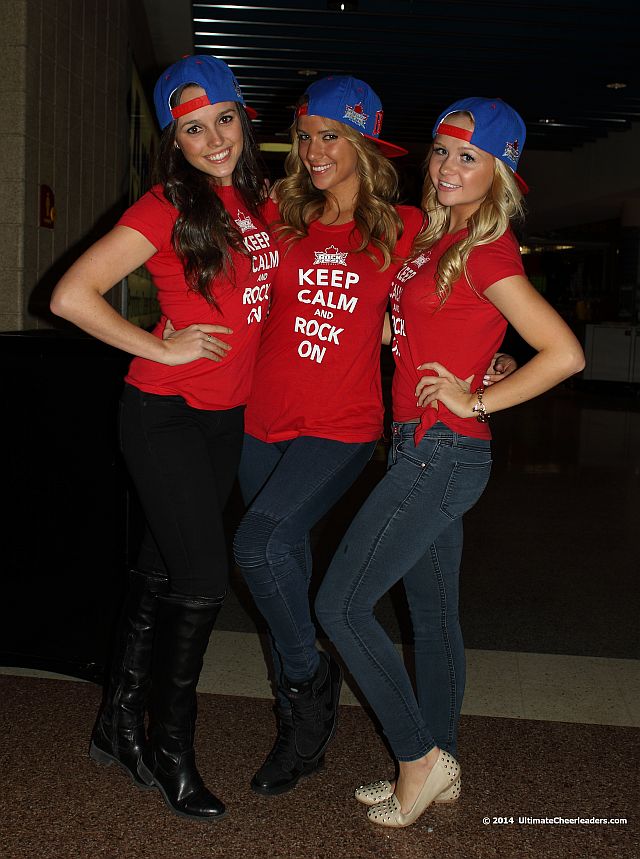 Of course a couple of  fans had to uphold the image of the Philadelphia (Hey, we even booed Santa Claus) and called security on the girls. After the game I apologized profusely on behalf of the city. 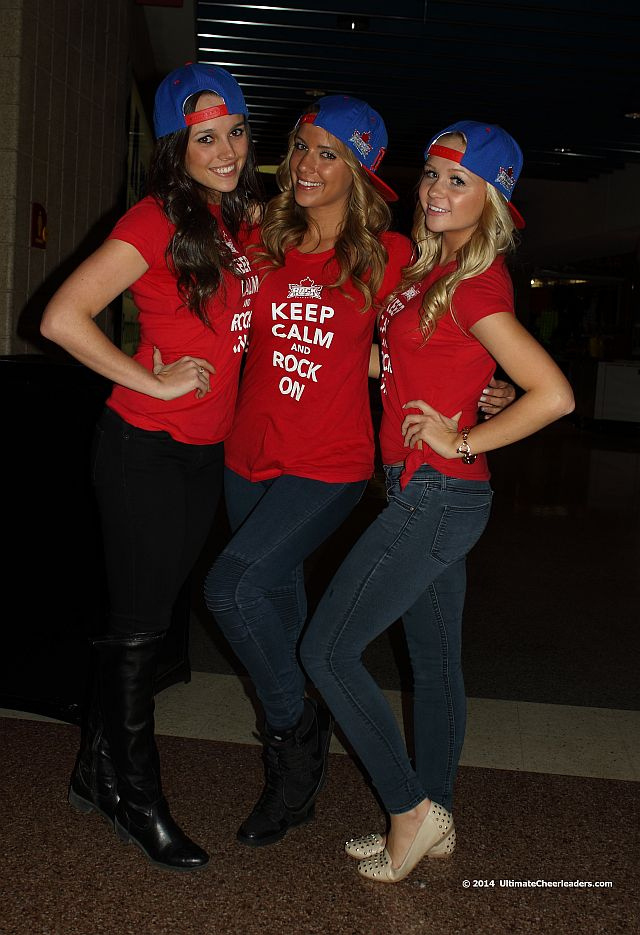 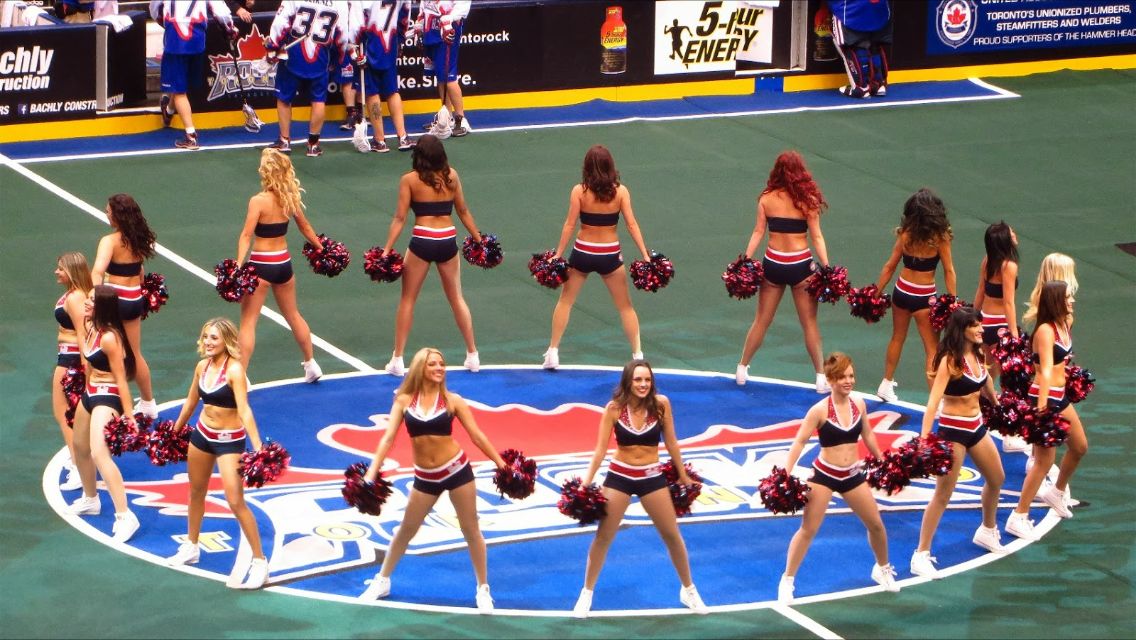 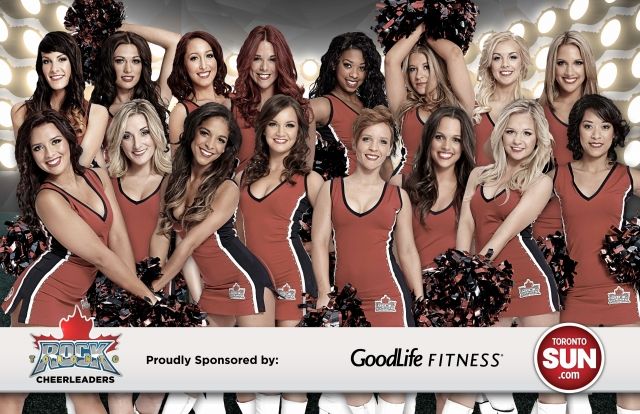 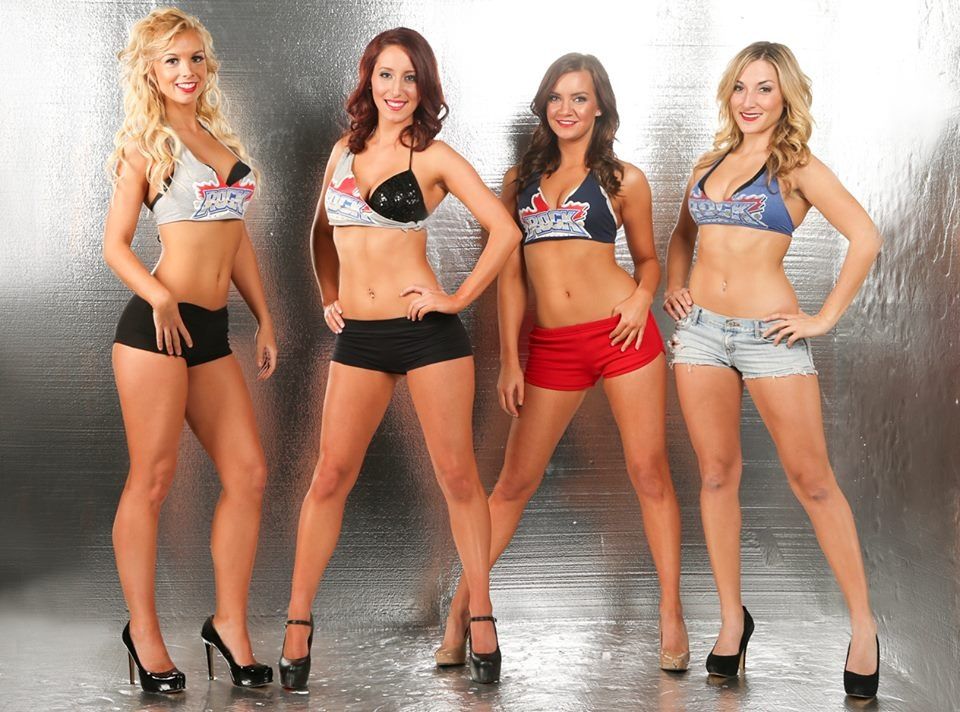 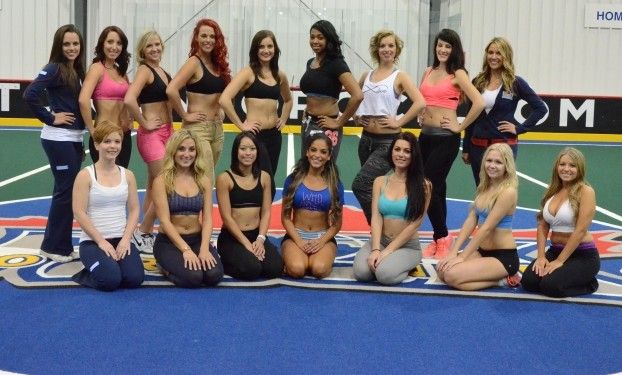 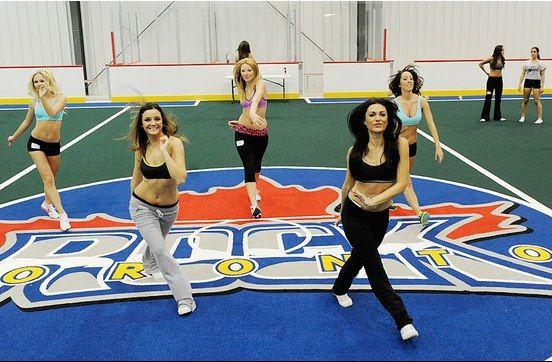 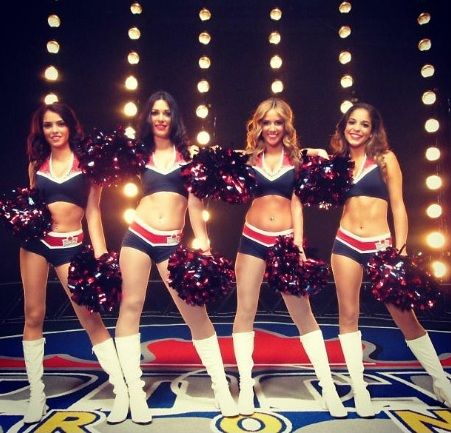 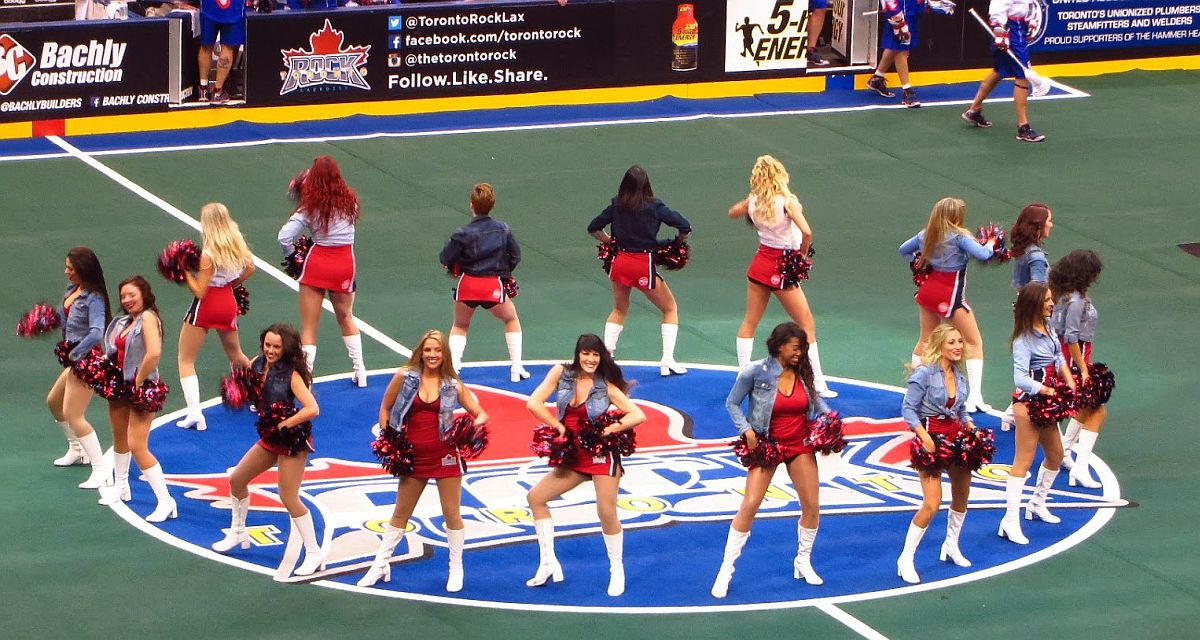 Next chance to catch the Rock Cheerleaders in action is tomorrow at the Air Canada Centre when the Rock host the Vancouver Stealth. 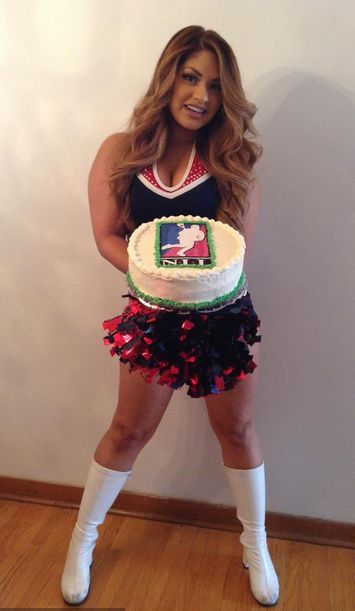 As the two national sports of Canada, people in the hockey and lacrosse communities tend to feed off one another. This was especially true when friends of Montreal Canadiens defenseman P.K. Subban contacted Toronto Rock cheerleader Alicia to order a personalized cake celebrating the Toronto native winning the Norris Trophy as the NHL’s best defenseman this past season.

After Alicia’s baking talents were recently featured in a Toronto sports blog here, NLL.com caught up with the 23-year-old from Etobicoke, Ontario to talk cake, cheerleading and the Rock. Be sure to check out the photo gallery to see some of her work.

When did you decide to start baking cakes?

I’ve always loved baking. When I was younger, I would bake to clear my head – my family, friends and coworkers loved it! In 2010, I did my first specialty cake for my cheerleading team’s end of the year party. It was a cake of the Rogers Centre (where I cheered on the Toronto Argonauts as a CFL cheerleader), complete with three levels of stands, fans, players and cheerleaders with pompoms! It was then I decided that I could pursue this as a career, not just a pastime. (At the time I was an English major at university studying to be a teacher). I made the switch to a Baking program and graduated this past spring. It was the scariest decision I’ve ever made but I couldn’t be happier and have never looked back. When work is something you love, it doesn’t feel like work anymore. I’m very fortunate that I get to call this my career.

How did the Norris Trophy cake for P.K. Subban come about?

A friend of mine was going to an event with some coworkers one night and I tagged along. I networked a bit, and a few weeks later, I got a phone call. Apparently a couple of the guys I had been talking to were friends of Subban and wanted to order a cake to celebrate PK winning the Norris Trophy! This was my first high-profile cake so I was a bit nervous, but very excited for the opportunity. I had to pay so much attention to detail because not only was I recreating a highly recognizable uniform, but also Subban himself! Seeing Subban tweet a picture of the cake (here) later that night felt unreal!

What’s your favorite cake that you’ve made?

I love all of the cakes I’ve made because to me they’re my personal works of art, so it’s hard to choose just one! With each cake I gain more experience, so I always feel like my most recent cake is the best yet. My most recent cake is a three-tier cake covered in buttercream rosettes and stars, with a ribbon with a cross on the middle tier. I usually make specialty cakes, so doing a classic cake like this was a fun and welcomed change. My favourite cakes though are the ones that challenge me. I think this is why I love the Norris Trophy cake so much.

Are most of the parts of your cakes edible?

My cakes are usually 100% edible, with the exception of stabilizing dowels on tiered cakes.

Do you watch any of the popular reality TV shows about cake?

When I was younger I used to watch a lot of Cake Boss and Ace of Cakes but my favourite show was always The Food Network Challenge – Cake Edition! Recently I’ve started watching Sweet Genius and Sugar Dome. I’d love to compete on one (or all) of those shows someday!

What’s the best part about being a Rock cheerleader? How long have you been on the team?

Being a Rock cheerleader has been such a great experience so far. The fans are a great part of the job. I love being able to share my energy and passion for lacrosse and the Rock with them. They’re so excited to watch the game and as a cheerleader I feed off their excitement! They’re also the best fans in Toronto and in the league, hands down. I’d say the best part though is being able to call the Rock my family. It’s a very tight-knit group, and we’ve really shown each other that we can and always will come together when a member needs us. I’ve been a professional cheerleader since 2010, and started with the Rock in 2012. Though it’s only been one season so far, I feel like I’ve known the members of the Rock community for years!

Probably Garrett Billings. He was our team’s top scorer last season! And of course “my captain, your captain, our captain…Colin Doyle!”

What’s it like to take the floor at the Air Canada Centre in front of 10,000+ Rock fans?

It’s an exhilarating experience! We usually perform three times a game at every home game, yet I still get nervous every time I run out on field! Our fans are amazing and I couldn’t imagine cheering on a better team.

We’ve heard that other Rock cheer members also have some special talents. What can you tell us about your teammates?

Keli is musically inclined and plays the clarinet on the Canadian Armed Forces. Jenny B. is a co-founder of the charity Dancers for Cancer. Trisha is currently in Nicaragua becoming a yoga instructor. Brittany was a performer at The International Festival in Dubai. I’m lucky to cheerlead with a group of diverse and extremely talented young women on the Rock, I wish I could tell you about all of them!

Have you ever brought a cake in to share with your teammates?

One of our home games fell on the birthday of Paola, the head coach of the Rock cheerleaders. She usually brings a cupcake or cake pop to practice for any of our birthdays, so we decided I would make her a special birthday cake and bring it to the game as a surprise. It was a Tiffany’s box with a bracelet on it. Making it was fun but the biggest challenge was sneaking it into the Air Canada Centre and down into our changeroom without her seeing it! It felt like Mission Impossible – we had girls watching doors, girls looking out, and girls coordinating on cell phones throughout the stadium! It took a handful of cheerleaders and diversions, but we managed to pull it off!

What other hobbies do you have?

I love being active – whether it’s taking dance classes, doing yoga, or biking. I also love watching The Walking Dead and zombie movies!

In addition to sampling some of your work, how influential have your family and friends been regarding your career?

I’d just like to thank my family and friends for being so supportive and encouraging throughout this experience for me. They made my career transition seem not so scary and believed in me when it was hard for me to believe in myself. 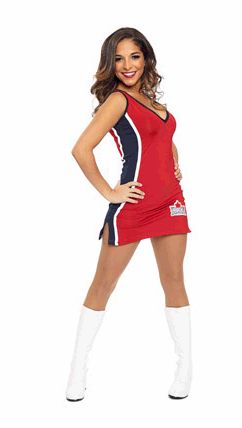 Born and raised in Barzil, Keli is a two-year veteran of the NLL Toronto Rocks (Indoor Lacrosse) Cheerleaders. 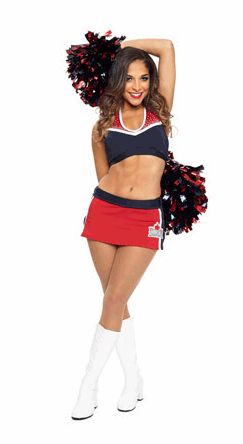