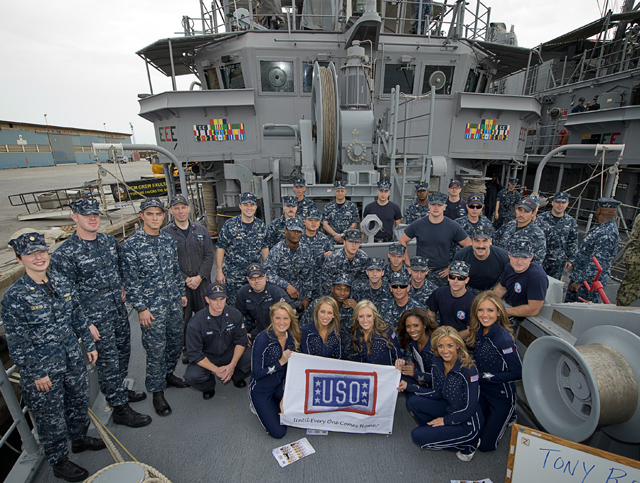 The Dallas Cowboys Cheerleaders Continue More Than 30-year History of Supporting our Men and Women in Uniform
PR Web
December 27, 2012

True to their long history of supporting troops and military families the Dallas Cowboys Cheerleaders (DCC) recently set out on their 75th USO/Armed Forces Entertainment tour and are busy spreading holiday cheer to troops in the Middle East. Among the most traveled of USO tour veterans, the DCC have traveled to more than 200 locations since their first USO tour in 1979, lifting the spirits and delivering a touch of home to countless troops and military families around the world.

So far, the DCC have uplifted the lives of hundreds of troops spending this holiday season deployed overseas.
As part of their longstanding USO history, the DCC have visited troops and military families in locations such as Afghanistan, Bahrain, Cuba, Germany, Iceland, Iraq, Japan, South Korea, Kuwait, the United Kingdom, as well as numerous stateside visits.
Always looking for ways to show their support of troops members of the DCC attended the USO’s 2012 Gala to help celebrate and thank troops for their service and dedication.
The team wrapped up the 7th season of the hit reality series “Dallas Cowboys Cheerleaders: Making the Team,” which airs on the CMT network.
When getting into the holiday spirit this season, remember our deployed servicemen and women, wounded troops and military families. Visit usowishbook.org and recognize a special occasion while directly benefiting troops and their families.

QUOTES:
Attributed to Sloan Gibson:
“The USO and the Dallas Cowboys Cheerleaders have been delivering life-changing experiences to troops and military families for more than 30 years. We are both proud and thankful for the DCC’s continued commitment to supporting our troops and their families. This 75th tour is a momentous occasion in USO history and we couldn’t be happier about sharing this milestone with an organization like the DCC.”

Attributed to Dallas Cowboys Cheerleaders Cassie Trammell:
“We’ve seen so many service men and women so far and it’s been a blast. We are so grateful for the opportunity to extend America’s thanks to our troops during this holiday season, a time when they miss their families and comforts of home the most. Being able to distract them, even for just a little while, from what they are missing back home is such an honor for all of us. ”

GARRISON YONGSAN, Republic of Korea – Dubbed “America’s Sweethearts” the Dallas Cowboys Cheerleaders are one of the most popular cheerleader squads of the National Football League.

DCC have toured throughout the military installations of the United States and overseas locations since 1979, which all started with South Korea. This year’s stop is no exception as the Dallas Cowboys Cheerleaders entertained Servicemembers and their families for the Christmas holiday season while visiting at Collier Fitness Center, Garrison Yongsan, Dec. 26.

“I love being able to come overseas to Korea and support the Troops. It’s just a small way of us showing our appreciation for what the Troops are over here doing,” said DCC squad member Trisha Trevino. “We understand the sacrifices that you all make and it’s really cool that we’re in a position where we can wear the Cowboys’ Cheerleaders uniform and bring the brand over here. It puts us in a position to be able to travel and actually make an impact when we arrive and we meet the Troops, when we talk to them, when we perform for them.”

Before the founding of the Dallas Cowboys Cheerleaders (DCC), the football team’s cheer squad was a male-female group called CowBelles & Beaux in 1960. The squad was made up of local high school students. At the time cheerleading was a rookie sport of exhorting the audience to show support for a team.

“This is my very first USO tour, my first time to Korea, my first time overseas – first time everything pretty much,” smiled DCC squad member Sydney Durso. “I’m so excited. So far the experience has been amazing. The girls have been asking me ‘is it what you thought?’ Honestly, I couldn’t even imagine what it was going to be like and it’s just blown me away on how amazing it’s been so far. Hopefully, I’ll be able to visit again after this. I don’t want this to be the last time. I’ve had so many great experiences so far I would like to just keep adding to that.”

“Well being away from my family – we discussed that we’re going to celebrate Christmas when I get back – so I’ve emotionally prepared myself not to get sad. I know all the Soldiers that are away from their families so much longer than we are on this trip so it meant more for me to come here and visit them and to put smiles on their faces because I know that my family will be there with Christmas when I get home. I mean, it’s actually starting to settle in right now actually, that Christmas is almost over in my hometown. But it’s okay I’m in a great mood and I’m happy to be performing tonight,” said Durso.

Everywhere across the country or around the world that any of these ladies appear, people congregate looking for the opportunity for a photograph, an autograph, or a few moments to say hello.

“Everyone wants to make a difference and everyone wants to show their appreciation,” Trevino smiled. “It’s really cool that the DCC organization and the USO have given us that opportunity to come overseas and we can actually do it. We can actually make a difference, put smiles on their faces and really does mean a lot to us like when we sit one-on-one with the different military men and women and we learn about them. I love coming over here and meeting them and learning their stories. It’s just a really cool way that we can give back to them. It’s so small compared to what you all do for us over here.”

“This is my sixth year as a Dallas Cowboys Cheerleader and my fourth time to Korea,” added Trevino. “It’s definitely hard to be away from our families during the holidays but we also understand that the Troops are away from their families at home for every single day of the year. We all make sacrifices and adjustments at home. Like my family celebrated Christmas before I left and it is hard, we’re all human and we like to be with our families over Christmas. But it also really helps whenever we can visit the Troops and their thanking us, overly thanking us for being here. It really helps us to be able to be away from our families because we can hang out with you all. You guys make us feel so appreciated. It definitely helps.”

Prior to the performance the cheerleaders hung out with the youth cheerleaders from Yongsan for a workshop. They also signed autographs and took pictures with Servicemembers and their families after the show.

As the saying goes, “They are often imitated… never equaled… They are the Dallas Cowboys Cheerleaders!”

YONGSAN GARRISON, Republic of Korea – A visibly star-struck group of about 30 Yongsan children attended a Dallas Cowboys Cheerleaders workshop Dec. 20 at Yongsan’s Child, Youth and School Services gym before a larger show later in the day.

The Cowboys Cheerleaders gave lesson to children on step coordination, poses and smiling, followed by an actual demonstration by the cheerleaders. The performance was given with holiday background music, creating frenzied applause from the children.

“I’m very happy and excited. I learned cheers and how to walk during the shows,” said Abigail Sigler, a second grader at Seoul American Elementary School.

Shortly after the workshop, your correspondent spoke with Ally Traylor, one of Cowboys Cheerleaders.

Kim: Is that your first time participating this event in Korea?

Ally: This is actually my second year being part of the USO tour since its first tour in 1979. It’s my third year as a Dallas Cowboys cheerleader.

Kim: What is the main purpose of the event?

Ally: The main purpose of this event is our entire tour through out Korea. It truly says “thank you” on behalf of the entire nation and the Dallas Cowboys. We are so excited to be here and to bring holiday theme to support them anyway possible as well as their families.

Kim: What do you guys exactly teach girls during the workshop?

Ally: We taught them a little bit of what we do in Dallas. Our cheerleaders are probably known for the silence dance on the football field, so we taught them some of what we do like cheer dances and chants. Then, we allow them to perform for their parents.

Kim: Are there any specific reasons you became a cheerleader?

Ally: I became a Dallas Cowboys Cheerleader because it’s a childhood dream of mine. Actually, I grew up in Missouri in families who loved watching Cowboys games. Of course, what a better way to export the Cowboys than being Cowboys cheerleader?!

Kim: Who is your favorite NFL player?

Ally: My favorite NFL player is Tony Romo. He is our quarterback and has a great personality and gets his job done on the field.

Kim: What do you feel about playing against your rival team, the Philadelphia Eagles, especially quarterback Donovan McNabb?

Ally: We are having fun and healthy rivalry with the Eagles as they are part of our NFC East. It’s fun when we face the opponents like them, and we do have a special history of having rivalry with them. Donovan McNabb is very talented and he also gets his job done on the field, so hopefully whenever we face them, we just do a little bit better.

Following the interview, the cheerleaders moved the stage to the Collier Field House and performed a high-energy musical and dance concert.

During the show, cheerleader Trisha Trevino asked Cowboys trivia questions and handed out gifts to those that were able to answer correctly. Some of the questions asked were: how many Super Bowls have the Cowboys won and how many stripes are in the Cowboys Cheerleaders’ uniform? The answers were five, and 15.

Garrison Commander Col. Dave Hall and Command Sgt. Maj. Ralph Rusch and their families joined the Yongsan crowds to cheer the Cowboys on.

“This is clearly the main event at Yongsan,” Hall said. “It is another example of our being an Army Community of Excellence and strengthening ties within the community. I really appreciate the cheerleaders for forfeiting their Christmas and New Year to be on the road to entertain us. What a great main event for Yongsan community!”

Following the show, the cheerleaders mingled with the audience, signing autographs and posing for photos with fans and community members.

A group of Cowboys Cheerleaders recently visited the troops stationed at Kunsan Air Base in South Korea as part of their 2009 USO Holiday tour. Click here to view full size versions of the photos below.

Members of the Dallas Cowboys Cheerleaders were in Korea last night — the United States Army Garrison Humphreys, to be precise — bringing some ho-ho-ho to more than 300 troops, civilians and their kinfolk stationed there. Check out the Official Slide Show for some US-oh! Hit it, Bert Convy! 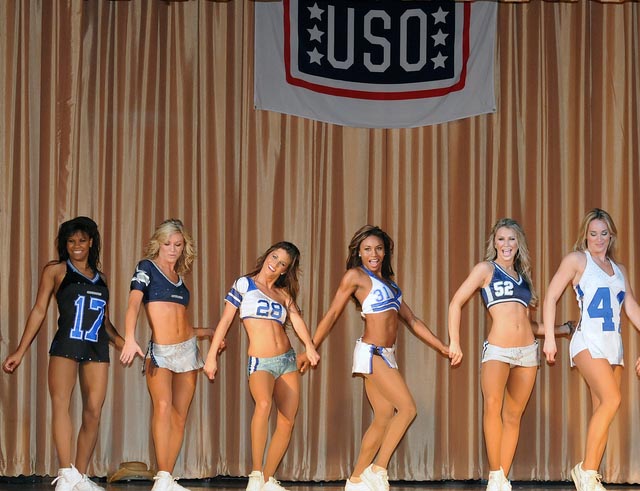