On Saturday, March 30 the Charlotte Knights held Knights Fest at Knights Stadium. The annual event was filled with fan-friendly activities including behind-the-scenes tours, inflatable games for kids, National Anthem auditions, and a media celebrity softball game on the field. One of the key moments of the day took place after the first inning of the softball game as the Knights revealed their first-ever “Dance Team”. Now, the Knights need your help in naming the team. 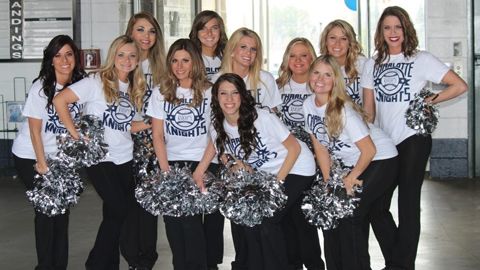 Fans interested in naming the team can email their suggestions to Media Relations Director Tommy Viola at tommyv@charlotteknights.com. Entries must be received by Tuesday, April 9 at 5:00 p.m. The winning name will be revealed on Opening Day during the Dance Team’s pre-game performance.

Beginning on Opening Day, April 11, the Knights Dance Team will perform at Knights Stadium and become a mainstay throughout the season. Below is the Dance Team’s schedule, which features 11 games this season.

“The Dance Team will play an integral part of our on-field entertainment during our final season at Knights Stadium,” said Knights General Manager of Baseball Operations Scott Brown. “We expect them to bring an exciting new element to our games. Having them perform will be a great way for us to boost the energy at the stadium!”

The Charlotte Knights Dance Team’s official dance studio is Anne Marie’s Academy of Dance. During each game that the team performs, fans in attendance will have a chance to meet and greet the girls on the Knights Stadium concourse. Photos with the girls and autographs are encouraged!