The demands of working at a startup are notorious. Long hours, multiple responsibilities, and building a truly innovative business can put a lot of pressure on a young company and its employees. But if you’re used to performing in front of 20,000 screaming fans, maybe the pressures of the tech world don’t seem quite as intimidating. 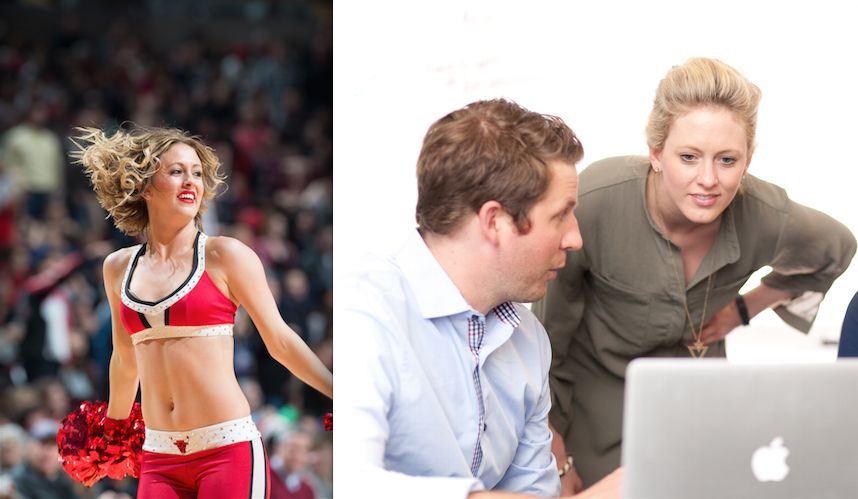 Amelia Carpenter is a marketing and communications associate at Narrative Science, a Chicago startup that turns massive amounts of data into written stories. She’s also one of the newest additions to the Luvabulls, the professional dance team of the Chicago Bulls. The dual roles have Carpenter growing a tech brand and doing internal communications during the day, and practicing and performing at the United Center at night. The two jobs require vastly different skill sets, but the gigs have more in common than you might think, Carpenter said.

“At Narrative Science, we have this product and we’re working day in and day out on this team and we all have the same goal,” she said. “And ultimately we have this audience that has these expectations of us. And it’s exactly the same as being on the Luvabulls. You’re working really hard as a team to put something together and deliver to an audience.”

After a full day at Narrative Science, Carpenter practices at least twice a week with the Luvabulls, plus games. During larger performances, like for Halloween and Christmas Day games, the team will practice four times a week. And there are the autograph signings and community outreach events that keep the dancers even busier. It’s a demanding schedule for the 25-year-old Detroit native, but doable with some creative time management, she said.

“I love working on a team,” Carpenter said. “I love working toward something awesome and putting in the work and the time to make it amazing. And the performance part of it, whether it’s delivering a product at Narrative Science or performing at a game, that’s the really rewarding part for me.”

Making the Luvabulls is intensely competitive; roughly 20 women make the team of over 200 that try out. Carpenter made the 2014-15 squad after unsuccessfully trying the previous two years. A dancer all the way through college at the University of Miami Ohio, she said making the Luvabulls was a dream come true.

“You don’t always get instant gratification as a dancer, so making the team was kind of indescribable,” she said. “It was amazing. I worked really hard for it.”

In college, Carpenter was in the entrepreneurship department at Miami and always had a desire to be a journalist and tells stories. So when Narrative Science CEO Stuart Frankel came to the school (where he graduated) to give a talk, Carpenter knew that was the company she wanted to work for.

“I knew about his success at DoubleClick and the sale to Google, and I was really interested in journalism, so when Narrative Science came up it was sort of a natural fit with journalism and tech. I pretty much just emailed him until he responded for an interview.”

Having a dual role in both the tech scene and the professional dance community comes with its challenges. And Carpenter acknowledged that both professions come with their fair share of stereotypes. But Carpenter is proof that techies can be extroverted performers, and dancers can be sort of nerdy. Both communities are very open minded, she said, which is something that attracted her to both professions.

“I think both communities are accepting of all personalities, especially in tech.” she said. “There’s so many good ideas and so much innovation, you have to be (open minded). And you have to be smart to be a dancer … to be that creative and to do the things that we do.”

The jobs have Carpenter thinking about how to merge the two, like using Bulls data at Narrative Science to perform predictive analytics before the season. She said both jobs compliment her personality, and she hopes to continue the roles in the future.

“I get to have my day job, and I’m really passionate about the people I work with there. And I get to go and be really creative and pursue my passion in dance at night.”