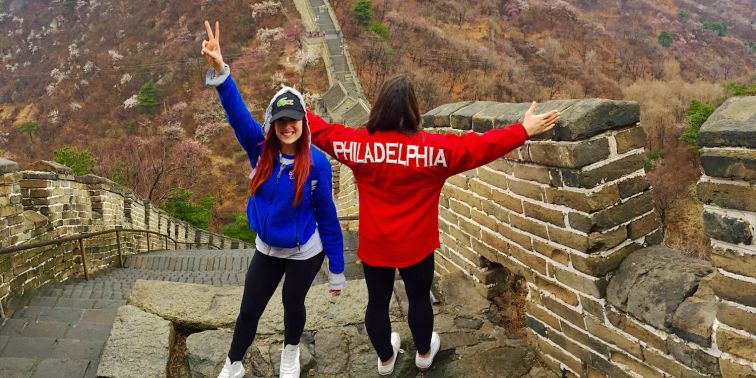 Amanda and Rachael here, just finishing up our rookie season with the Philadelphia 76ers! The two of us, along with four of our teammates, were chosen to represent the Sixers organization in Beijing, and the experience was amazing! Our three days here were filled with performances, appearances, and the wonderful opportunity to explore this beautiful city.

We boarded a 15-hour flight on Monday morning and arrived in Beijing on Tuesday afternoon. That evening, we had a rehearsal at the Convention Center of China for our performance the next day. Wednesday morning began with an early meeting with our tour guide and a trip to the Forbidden City. The Forbidden City consists of 9,999 and 1/2 rooms that were once used for many different purposes. Afterwards, we were able to attend a traditional Chinese Tea Ceremony which was enlightening and fun. Later that evening, we arrived at the National Convention Center of China to perform our five routines. We were provided with the opportunity to perform at two different venues. The first venue was to promote one of NBA China’s sponsors, Harbin Beer. The second performance was at a large dinner gala in front of over 1,000 people for the entire promotional event. To close up the evening, we attended a traditional Chinese dinner at a famous restaurant in the heart of Beijing

The next day, we ventured to the country side to visit the Great Wall of China. We successfully climbed through six towers of the Great Wall! As we continued our climb, we experienced a changes in weather, from fog to rain and even snow! After our descent back down the mountain side, we were educated about bartering with the local shop-keepers to purchase keepsakes for our family and friends.

After the long ride back to the city, we were presented with an amazing opportunity! We were invited to visit the NBA China office. Upon arrival, we were able to meet many of the staff and take a tour of the entire office. It was a great experience and was really fun to see the connections between the NBA in the U.S. and China. To prepare for our long ride home, we were able to experience a traditional Chinese massage.

Overall, being able to visit Beijing was an amazing opportunity in itself. The most memorable site we saw was definitely the Great Wall. The sheer length of the wall and the fact that it was all hand made was astounding! But our favorite part of the trip was being able to represent the Philadelphia 76ers organization as well as the league in NBA China’s Harbin Beer Event. We’re so thankful for this life-changing opportunity. Until next time, zai jian!