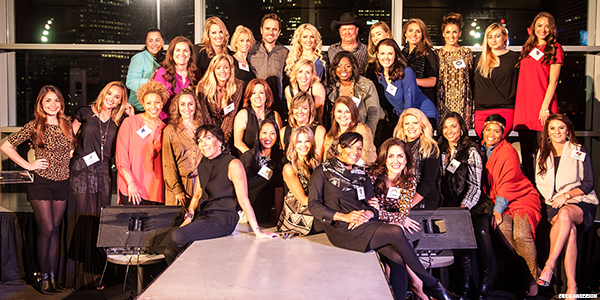 For the second time over their nearly two decade history, the Tennessee Titans hosted the NFL Cheerleading and Entertainment Directors for their annual three-day League Conference from February 22nd to February 24th.

“I was thrilled and proud to showcase our incredible town and our team to the rest of the league,” said Kinder. “It was an honor to be nominated as the 2016 host, and the city of Nashville proved again why we are the hottest place in the country right now!”

The conference began with the Vendors Showcase in the West Club at Nissan Stadium. The evening included presentations from 19 different companies, with products ranging from apparel to jewelry to photography. The night also included a surprise Writers in the Round with performances by multi-platinum recording artist Tracy Lawrence, ABC “Nashville’s” Charles Esten and Titans Cheerleader/country music artist Heidi West. Additional dance performances by the Tennessee Titans Cheerleaders and DC Dance Factory took place throughout the evening.

The second day of the conference was held at the Hilton Downtown Nashville. The day included a number of guest speakers discussing topics ranging from dermatology to the psychology of coaching. Additional breakout sessions included sponsorships, social media and junior cheerleading programs. The night concluded with a fantastic dinner in The Gulch at Sambuca and a visit to Broadway’s famous honky tonks.

After conference meetings concluded the morning of the 24th, attendees boarded the Big Pink Bus for an unforgettable tour of Nashville by the Jugg Sisters on their Original NashTrash Tour. The final day ended with Directors enjoying a memorable performance by songwriter Lance Carpenter at The Listening Room.