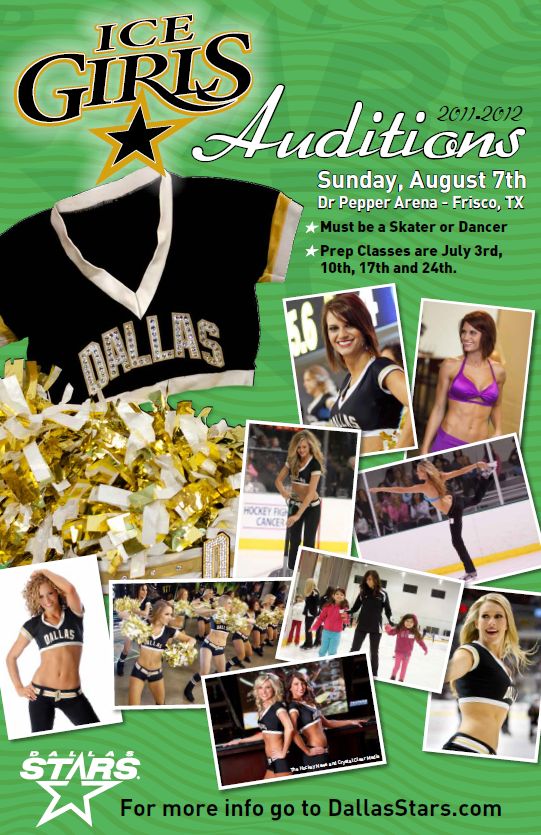 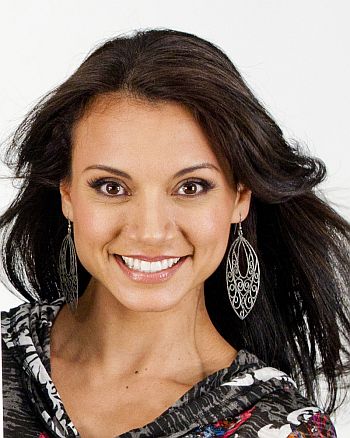 The Wilhelmina 40+ Model Search is a nationwide model search that celebrates women ages 40 and over who are confident, beautiful and inspirational. Our good friend Angie, who made the Mavericks Dancers at age 35 and also danced for the Dallas Stars for two seasons, tell us:

“I entered an open casting a month ago and I was just notified that I made it to the top 30 semi-finalists for the 40+ Wilhelmina Model Search out of tens of thousands! If you can vote for me today or tomorrow, I would appreciate it so much! The competition is fierce and I don’t know how far I will make it but it is an amazing journey! Thank you so much!

From the Fort Worth Star-Telegram: 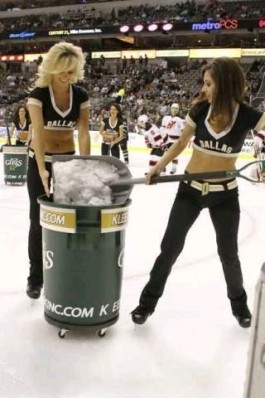 It is 6 p.m. on Tuesday, more than an hour and a half until the puck drops in the Dallas Stars-New Jersey Devils game at American Airlines Center. The fans haven’t arrived yet , but the Dallas Stars Ice Girls are already hard at work, practicing the evening’s routines underneath section 109. The 12 women have been split into two groups — the skaters, who will be on the ice during TV timeouts and intermissions, and the dancers, who will be on the platform cheering and generating excitement among the fans.

The skaters, who wait in the tunnel leading to the visitor’s locker room, will hit the ice at the 14, 10 and 6-minute marks of each period. By NHL rules, the ice surface must be cleaned during the three TV timeouts each period in four designated areas, including in front of the goal. By removing the loose ice, it speeds up the pace of the game and increases scoring chances. While many teams will have as many as 10 men perform this task, the Stars depend on the beautiful Ice Girls to do the job, getting on and off the ice in less than two minutes.

They manage to make this hard work of cleaning the ice appear graceful in front of thousands of people at each of the Stars 47 home games. That’s a direct reflection of the the Ice Girls third-year coordinator, Wendy Dutton. She handpicked this group and maps out their positions on the ice in advance. She also decides who will be up on the platform, performing and dancing for the crowd. Each of the girls can do both. When the squad was first selected, over half of the girls knew how to skate while the other girls picked it up quickly.

The Ice Girls are also very knowledgeable on the specifics of the game of hockey as well as the Stars. While several of the girls grew up close to hockey, the others rapidly developed a passion for the game. When they were originally selected, they were quizzed on when the team came to Dallas from Minnesota and what year the Stars won the Stanley Cup to details such as icing and major and minor penalties.

Away from the ice, the women all lead very different lives. They have jobs and careers as varying as dance instructor to a paleontologist. One is a dental hygienist, while another works in an oil field. Two of the Ice Girls are teachers. One of the girls is a nurse while another is an assistant to a buyer. Half of the girls are in college with studies ranging from teaching to Radio-TV-Film.

In addition to ice skating on their own, the girls meet up to practice every Sunday. The skaters and the dancers each have a captain who is responsible for making sure everyone is in the right spot at the right time, whether it’s at intermission on the Zamboni or mingling with fans for photos. For this game, veterans Kaime (skaters) and Rachael (dancers) took control of their groups for flawless performances.

The Ice Girls who skated on this night were Kaime, Robbyn, Candace, Christina, Alisha and Katharina. The dancers were Rachael, Laura, Jamie, Shahriela, Shanelle and Megan. While they are essentially cheerleaders for a pro sports team, they do so much more than just rooting on the team. While the Dallas Stars hockey team has been in a bit of a tailspin in the Western Conference standings as of late, the games are still a place to be seen due in no small part to the hard work and effort exhibited by the Ice Girls.

Click here for photos of the Stars Ice Girls on game day! 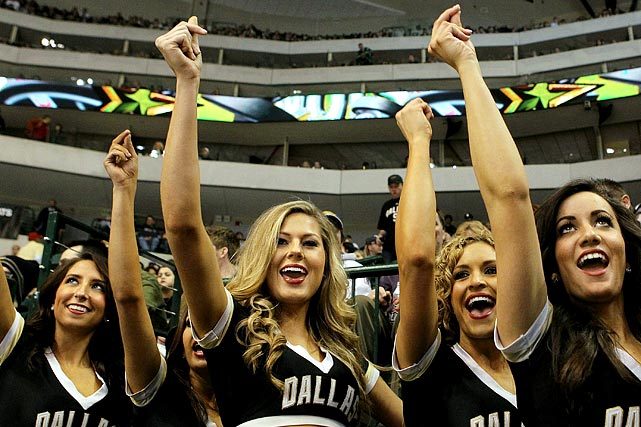 NBC Sports has lots of photos of NHL Ice Girls on the ice this season. The gallery includes ice crews from the Blackhawks, Ducks, Flyers, Hurricanes, Islanders, Kings, Lightning, Oilers, Penguins, Predators, Stars, and Thrashers. (Mostly the Islanders Ice Girls and Thrashers Blue Crew.) Click here to check it out.

So it’s a beautiful fall day in North Texas and what better place to be than the amazing pool on the seventh floor of the swanky Cirque Luxury high-rise in Victory Park. Not only does it provide for some of the most breathtaking views of the downtown Dallas skyline reflecting off the infinity pool, but it is the chosen location for a “prelude to the season” Dallas Stars Ice Girls photo shoot.

The Ice Girls are so much more than cheerleaders who can skate. The NHL mandates that the ice surface be cleaned during the three TV timeouts each period in four designated areas, including in front of the goal. By removing the loose ice, it can help speed up the pace of the game and increase scoring chances. Therefore, the Ice Girls have a direct impact on the game. The league put this policy into play eight years ago and while some teams have ice ‘crews’ (translation: dudes!), the Stars know that this is the South and beautiful women and Texas go hand-in-hand. And they have two minutes to get out on the ice with their snow shovels, plows and buckets, clean up the ice and get back into the tunnel.

How does one become an Ice Girl? The team held auditions in early August and 81 hopefuls showed up. That group was narrowed to 22, before the final squad of 19 was selected. Of the 19 girls that comprise the 2010-11 Ice Girls, they all either work full-time or go to college. Kamwin, in her rookie season, does both.

I chatted with a few of the girls during a break in the photo shoot and asked them what was the most exciting part of being in this exclusive group. I got everything from “Getting to perform in front of thousands of people” (Whitney, rookie), to “I joined a family with 18 new sisters” (Christina, rookie). Another rookie, Robbyn, grew up in Fort Worth and loved hockey after attending her first Fort Worth Fire game. She instantly became a Stars fan and has great memories of watching the 1999 Stanley Cup run.

The Ice Girls do not just skate and dance at the Stars games at American Airlines Center. They make appearances at TCU and SMU football tailgating, do charity work and take part in the Veteran’s Day parade. One of their biggest off-the-ice events is the Leukemia & Lymphoma Society’s Light The Night Walk.

When they’re on the ice, Rachael, a five year veteran, says, “It’s definitely intimidating to share the ice with professional athletes. But your adrenaline just takes over.” She grew up in Maine, and has followed hockey all her life. Her dad was a coach and her brother played. And now, as an Ice Girl, “I get front row seats to every Stars game,” she says, with a smile. “And I get paid for it.”

Wendy Dutton, in her third year as the team’s oordinator, says: “watching the rookies and veterans bond into a sisterhood is very special. It’s only adding to the excitement of the upcoming hockey season.”

Auditions are underway for the 2010-11 Dallas Stars Ice Girls. 80 candidates have been narrowed down to 22 finalists. 15 young ladies will will ultimately be selected to represent the stars. 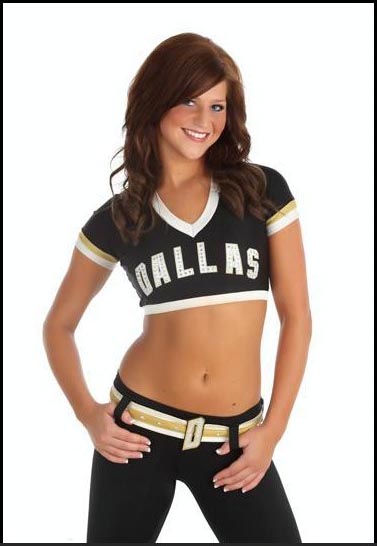 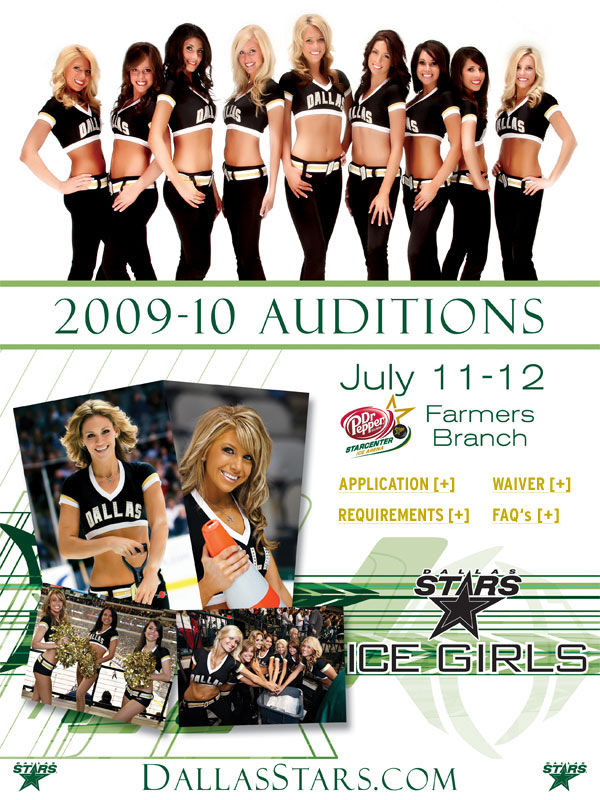