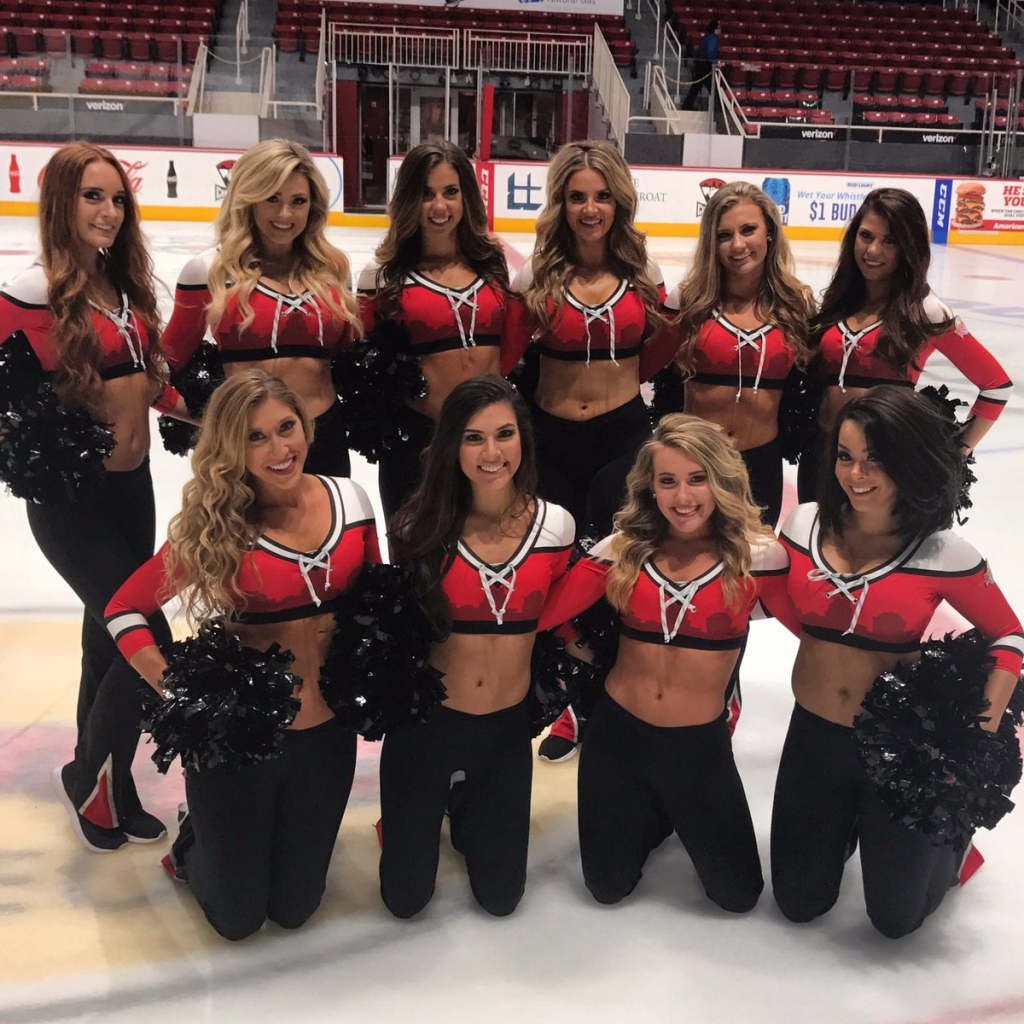 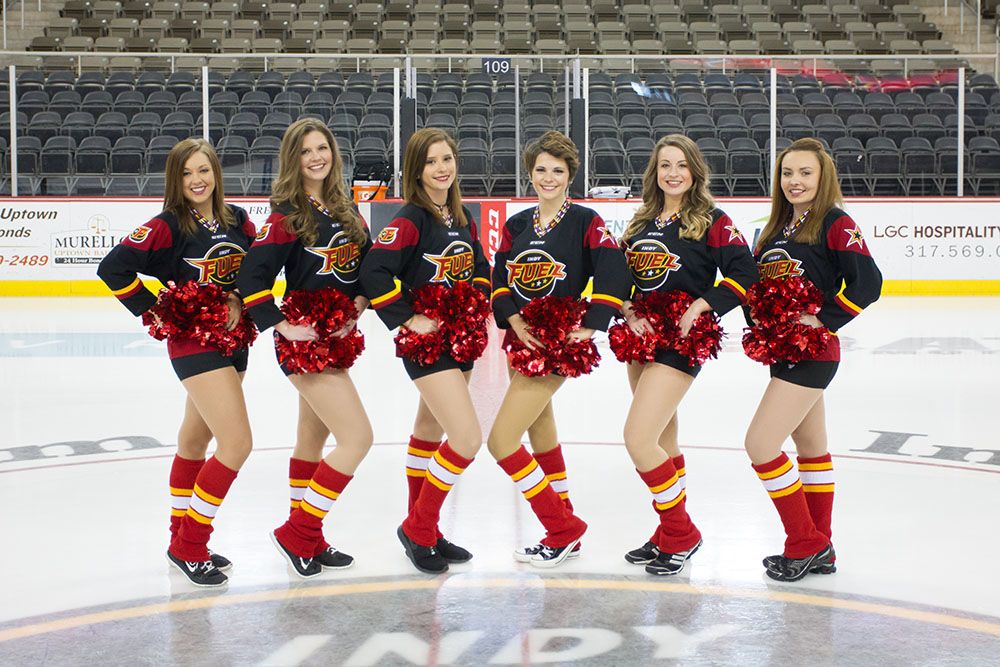 The Indy Fuel professional hockey team is now accepting applications for the 2015-16 Pit Crew! Auditions will be held Wednesday, August 26 from 6-10 p.m. at Community Healthplex (3660 Guion Rd, Indianapolis, IN 46222). We are looking for energetic cheerleaders/dancers who want to give our fans the ultimate hockey experience. This team will be made up of individuals who are 18 years of age or older, comfortable on camera and able to motivate fans in a high-energy entertainment environment. Pit Crew members must be able to stand on their feet for long periods of time and perform dance routines. Pit Crew members must also be available for ALL Fuel home games, and able to adjust their schedules to accommodate practices and promotional appearances, as these are booked throughout the season.

Click here for more information on the audition process and requirements. 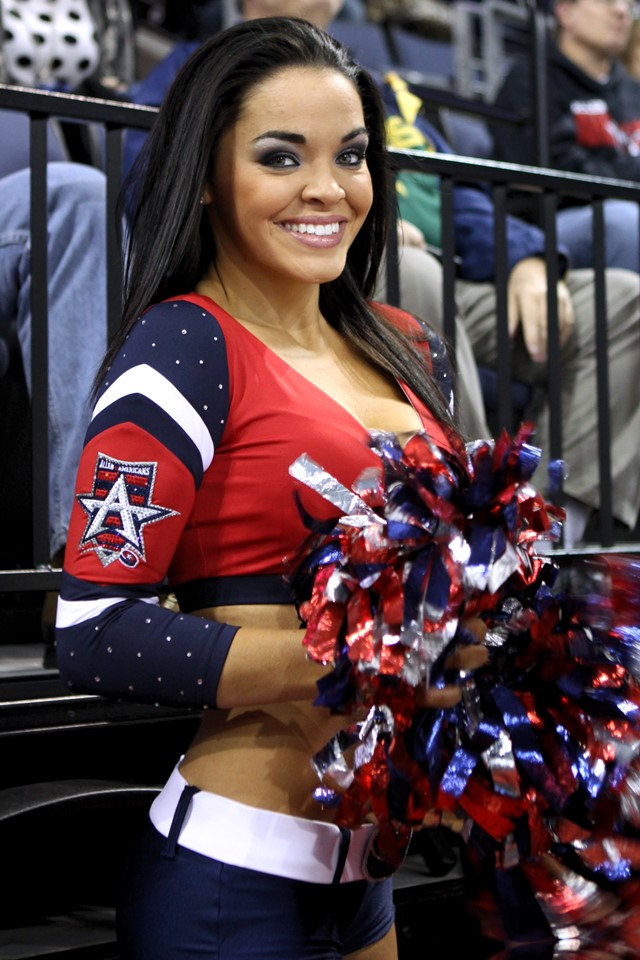 Former Tampa Bay Lightning Girl and Allen Americans Ice Angel Brooklyn’s teams are having great seasons. Their “Cups runneth over”! The Americans won their third straight ECHL Kelly Cup and the Lightning will try to extend the Stanley Cup tonight 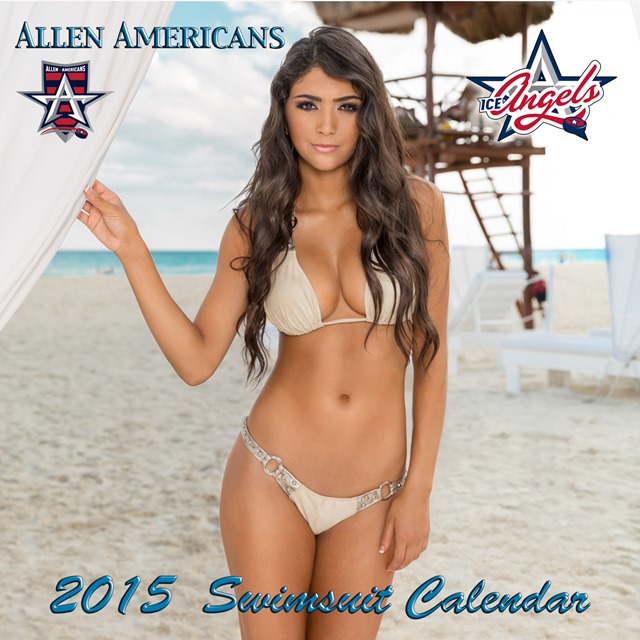 Stocking stuffer alert! The Allen Americans Ice Angels raised the bar with their 2015 Calendar release on November 22nd. This year, their photo shoot took place in the Playa del Carmen area, south of Cancun. It was a fun filled three-day stay that brought the ECHL dance team even closer together. Known for their beauty, fitness, and over the top dance talent, Ice Angels Director Stephanie Di-Biase Wheat again put together a phenomenal team for this season. Photographer James Higgins and crew handled the photography and a video was done by DJP productions. 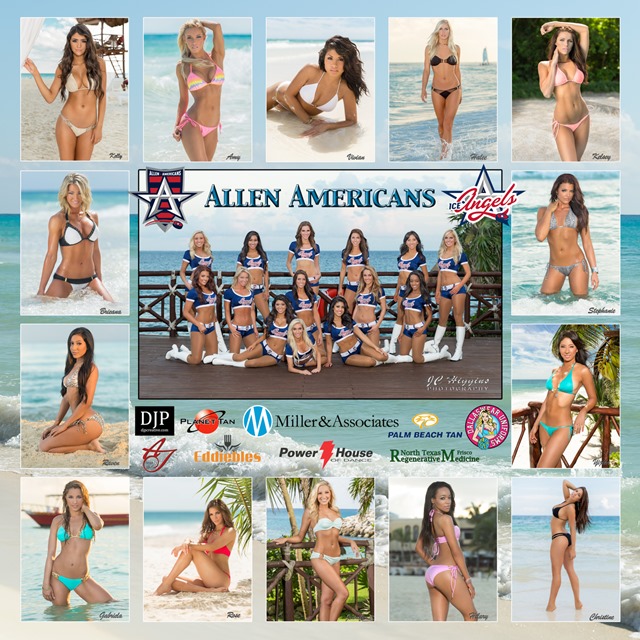 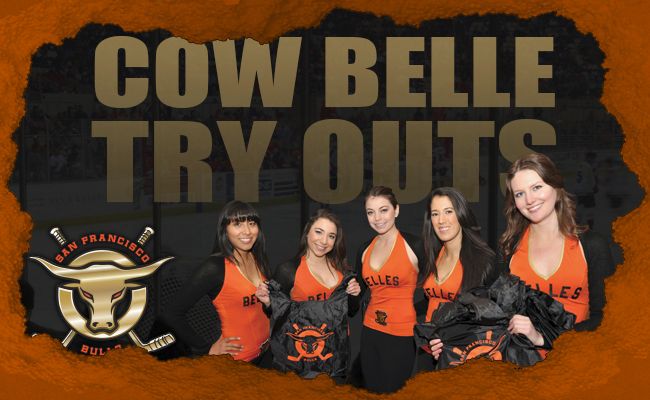 The San Francisco Bulls Professional Hockey Team, proud affiliate of the San Jose Sharks, are looking for energetic ice skaters and dancers to help excite the crowd for the 2013-14 season. SF Bulls Cow Belle (ice girl) tryouts are taking place at the Cow Palace on Saturday, October 5, beginning at 8:30 am. Both the Cow Belle Dance Team and The Ice Crew (skater) auditions will go from 8:30-noon. You may choose to audition for both positions, but can only be selected to one. The Bulls are searching for six skaters and six dancers for the upcoming season.

The Bulls are seeking energetic women that can ice skate or dance proficiently and are not shy in front of large crowds. The SF Bulls Cow Belles are a key component to the in-game entertainment at the Cow Palace during stoppages of play and in between periods. They also help to shovel the ice during TV timeouts, while ice skating. In addition, they will take to the stands to assist the in-game promotions. New to this year, the Arena Crew may be asked to perform dance routines. The Cow Belles also serve as representatives of the organization at community events throughout the year.

Tryouts for the SF Bulls Cow Belles will consist of interviews with the judges, on-ice skills (for the Ice Crew) and a dance performance (for the Arena Crew). Hopeful Ice Crew members are asked to bring their own skates to the audition.

To sign-up for the Cow Belle auditions, please fill out the following form. Upon completion, you will receive an e-mail shortly after with further information regarding the tryout.

The Cow Palace is located at 2600 Geneva Avenue in Daly City. 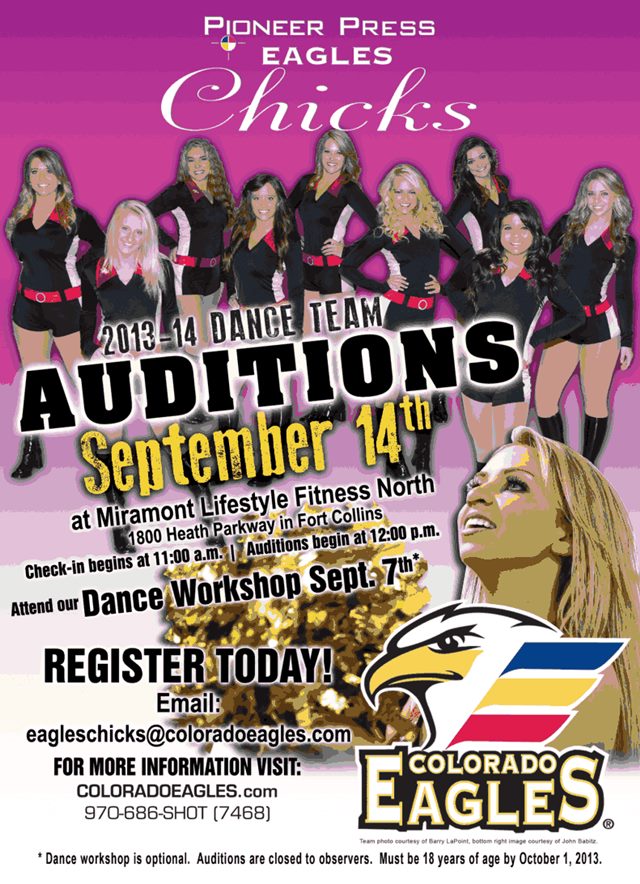 Amanda Brantley is the new Director and Manager of the Colorado Eagles Chicks, a professional dance team for Northern Colorado. Amanda danced with the Chicks for two seasons and has also spent the last five years coaching high school dance.

Amanda informs us that the Eagles Chicks are hosting auditions for their eleventh season on September 14th. Click on some of the images below to see their try-out and pre-audition workshop information, with more information at this link.

In addition there will be two audition prep clinics

Part two of my Carolina road trip involved a return Time Warner Cable Arena for the Charlotte Checkers Pink the Rink night. (As you can see the Checkmates were decked out in pink.) It was part of an effort to raise money and awareness in the fight against Breast Cancer.

First a stop by the Checkmates locker room.

And just why does she had a golf club? We’ll find out later.

On the concourse handing out game programs.

Part of the “Pink in the Rink” activites included has 6 breast cancer survivors dance with the Checkmates during the 1st intermission.

Rehearsing in the tunnel.

But what about that golf club? It was all part of a Checkmates fashion show held during the second intermission.

Next season the Checkers will move up from the ECHL to the AHL and start an affiliation with the Carolina Hurricanes. The Checkers will still be a part of the team, but new uniforms are in order as the teams colors will change to red and black.

At Davidson Day, she is known as “Madame Geiger” and is one of two French teachers for the school.In two weeks, though, Sheena Geiger of Davidson will set aside her classroom work to fly to Japan and join a team of performers marking the 40th anniversary of the Osaka World Expo.

She will be part of a group organized by World Campus International, a Tokyo-based nonprofit that encourages intercultural exchanges.

“Learning about other cultures, that’s my passion,” Sheena said. “I love learning languages and meeting people from around the world and traveling.”

Raised in Nova Scotia, Sheena said she grew up speaking Gaelic and step-dancing in the Scottish style. Her booth at the 40th Anniversary World Expo event will offer information about Canada. She will be able to both sing and dance at the closing ceremonies.

Performing in front of large crowds is nothing new to Sheena. Before coming to Davidson Day, she represented Canada in the professional performing group, Up With People, and spent last summer in Denver helping them choreograph their current world tour show. Now that she is based in Davidson, Sheena continues her interest in dance as a CheckMate, a cheerleader for the Charlotte Checkers.

Sheena Geiger is also a cheerleader for the Charlotte Checkers. Here’s a photo of her singing the Canadian National Anthem at a recent Checkers game.

The Osaka events will take place from March 10-16, and the trip will cost $2,500. Sheena is seeking sponsorships, and hopes to offer presentations about Japan when she returns. You can contact her by email (sgeiger@davidsonday.org).

Besides the thrill of the performances, which will have to be pulled together quickly according to a rigorous schedule, the World Campus International group will be offered opportunities to learn more about their host country.

“They’ll be matching us with families and giving us language lessons,” she said. “I’m so excited!” 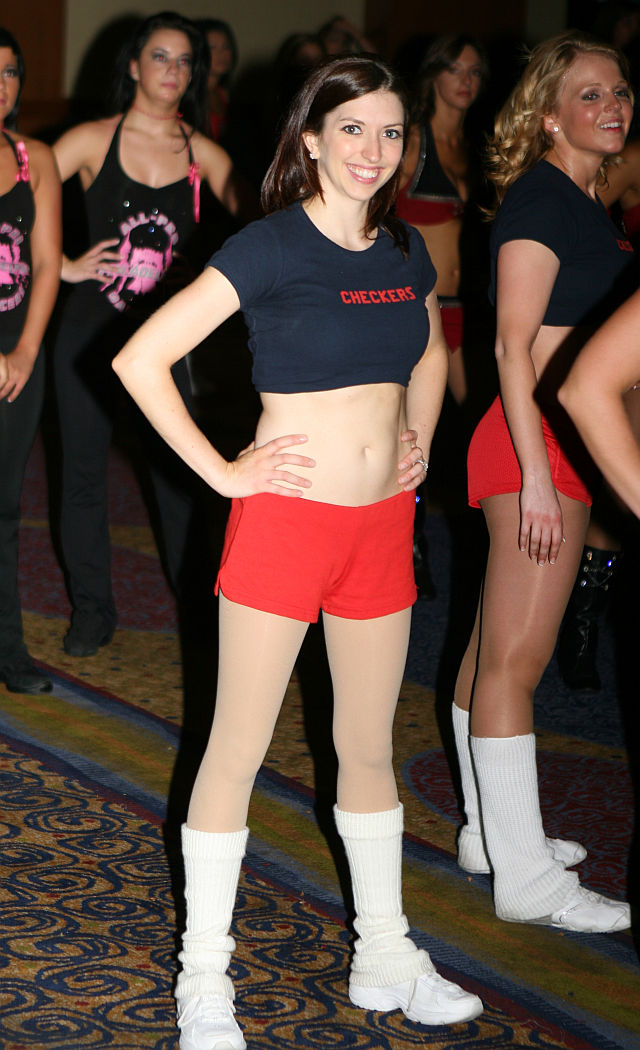 This past Sunday in the Queen City was full of sun and 76 degrees. It was a beautiful day for a Panthers game (and a Checkers game later that afternoon). It brought out the TopCats, LadyCats and Checkmates! All that star power helped the Panthers defeat the rival Falcons. 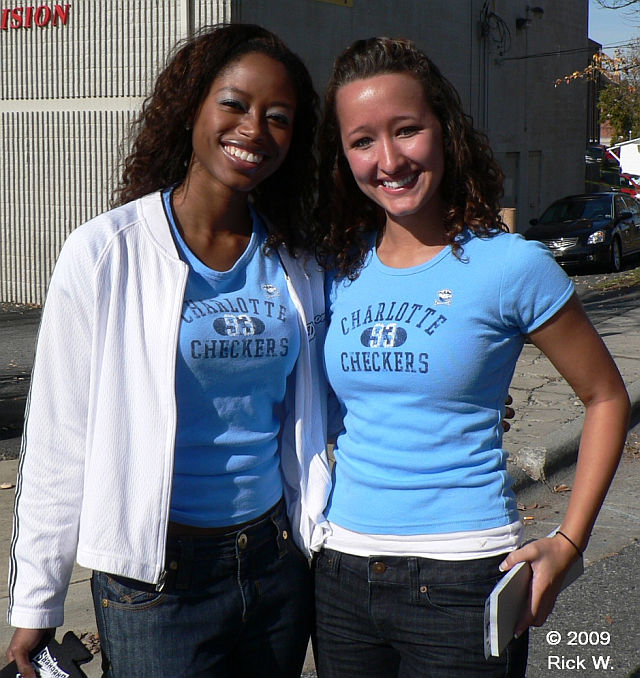 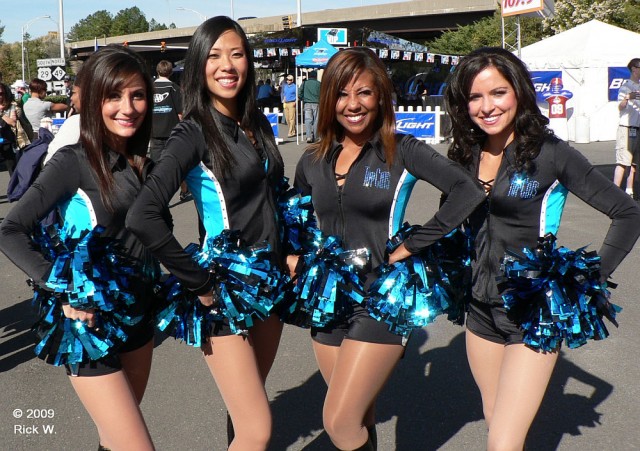 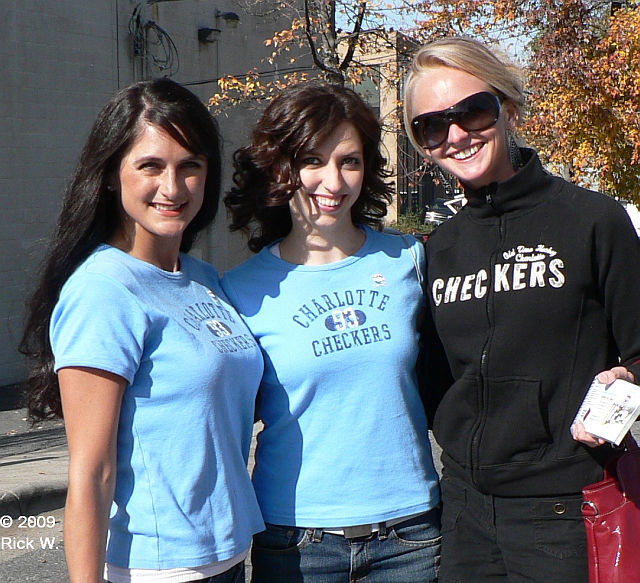 Checkmates Julie and Sheena with a friend 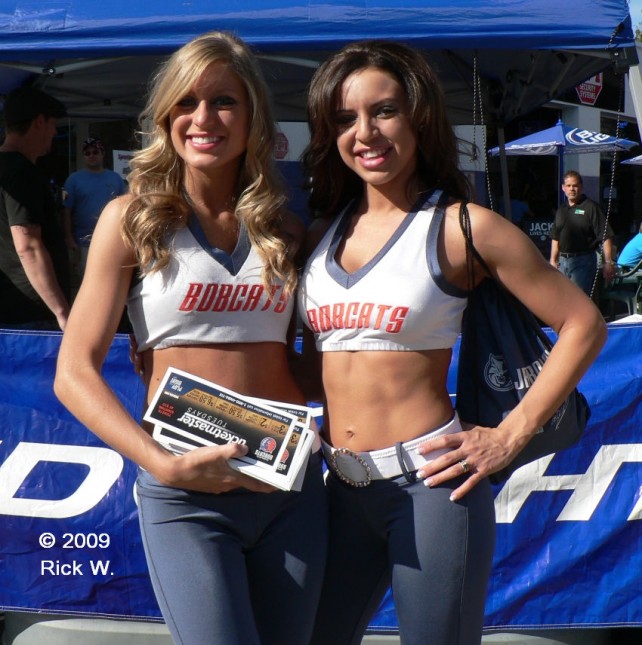 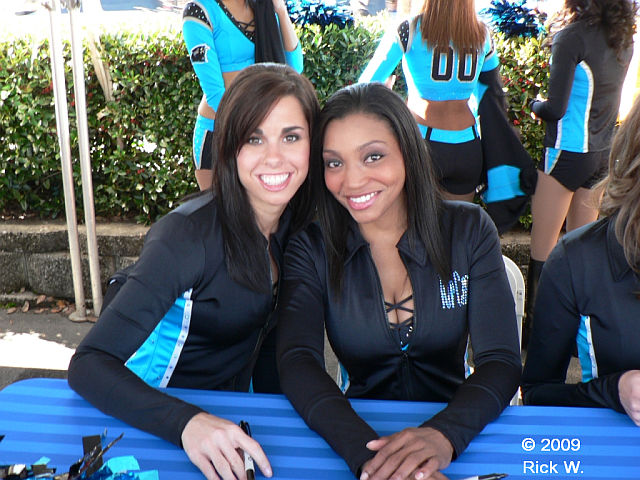 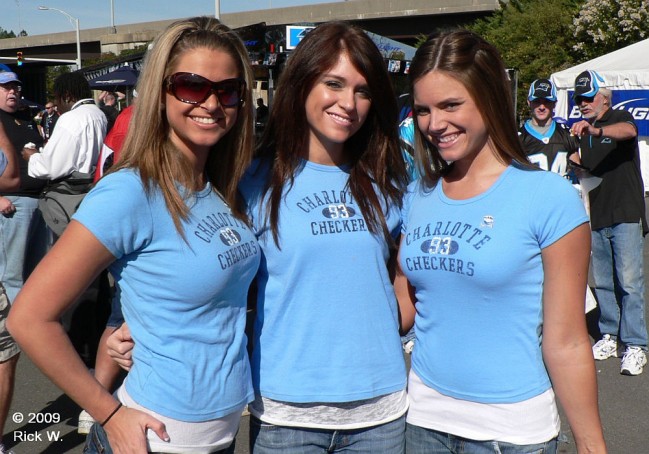 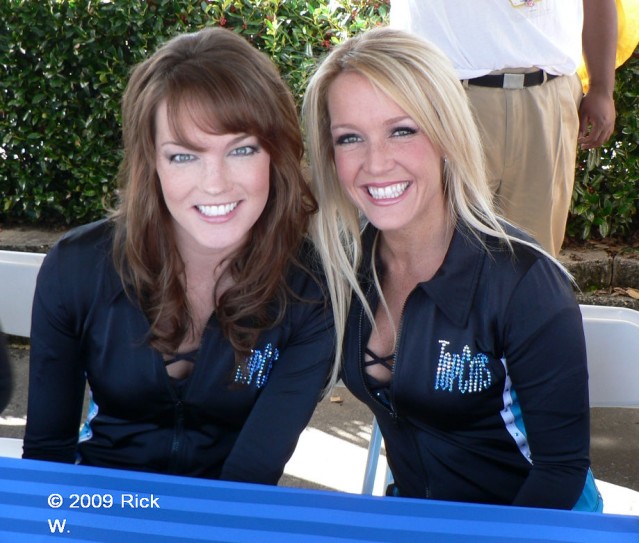 The Florida Everblades announced that auditions for the newly formed Everblades Gator Girls will be held on Sunday, Aug. 30.

Candidates should be female cheerleaders and dancers over the age of 21 who are interested in supporting Everblades hockey all season long. Although skating is not required, skaters are being looked at to add to the dynamic of the team.

Auditions will take place in the Olde Florida Room inside Germain Arena. Registration is at 1 p.m., with a $20 fee. Auditions begin at 2 p.m.

What to wear during competition: Sports bra or dance-crop top with dance shorts; Flesh colored tights or panty hose; Dance shoes or sneakers. No dance pants, warms-ups, long shorts, thongs, or bikinis; Wear your hair in a style that compliments your features. (No ponytails or hair pulled half up)

For further information, send an e-mail to Kristi at gatorgirlsinfo@yahoo.com.

Here’s your first look at the 2009-10 ECHL Charlotte Checkmates: 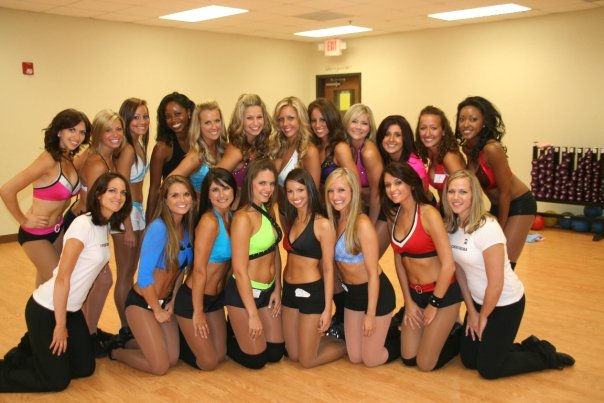 There are 20 ladies on this year’s squad who will cheer on the Checkers hockey team at Time-Warner Arena beginning in October.

A couple of photos from auditions: 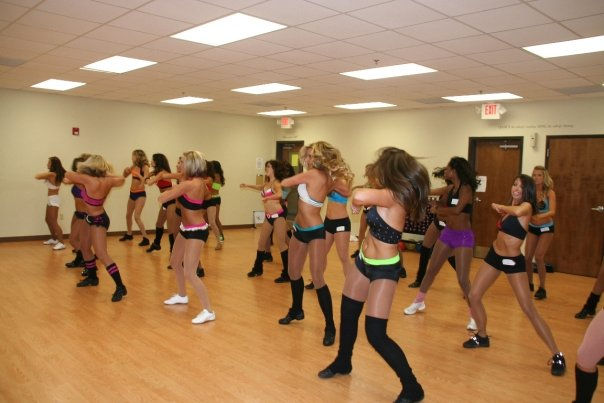 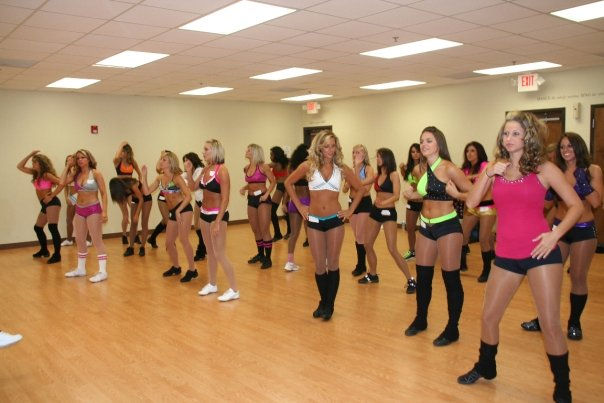 On a related note, Checkmates and LadyCats Director Brandii McCoy tells us she had her baby last Friday! (08/07/09).

Her little future pro cheerleader decided that the best time to
come was one week AFTER LadyCats tryouts and one week BEFORE CheckMates. She sandwiched herself right smack in the middle of Brandii’s two biggest days of the summer. 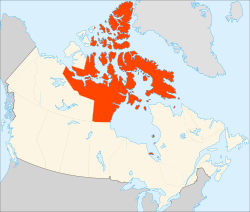 Sheena used to work in a French daycare center in Iqaluit, the capital of Canada’s newest and northernmost territory. One of the more unusual problems that she would encounter was having to keep the children inside because polar bears were roaming around outside. That’s just one stop on the wild (and romantic journey) that brought Sheena to the ice of Charlotte’s Time-Warner Arena as a member of the ECHL Charlotte Checkmates.

Sheena grew up in Canada’s Nova Scotia province and graduated from St. Francis Xavier University with degrees in French, Biology and Education.

She did an internship in the Bahamas working with dolphins, traveled to the frozen Arctic for the aforementioned daycare position, and worked at Sea World in Orlando as a Marine Information officer.

During her last week in Orlando, she was working the beluga whales exhibit, when a father and young daughter stopped to ask some questions. After an hour Sheena rotated to the polar bear exhibit and ran into the same father and daughter. This continued throughout the day with Sheena answering all their questions. At the end of the day he gave Sheena his card. 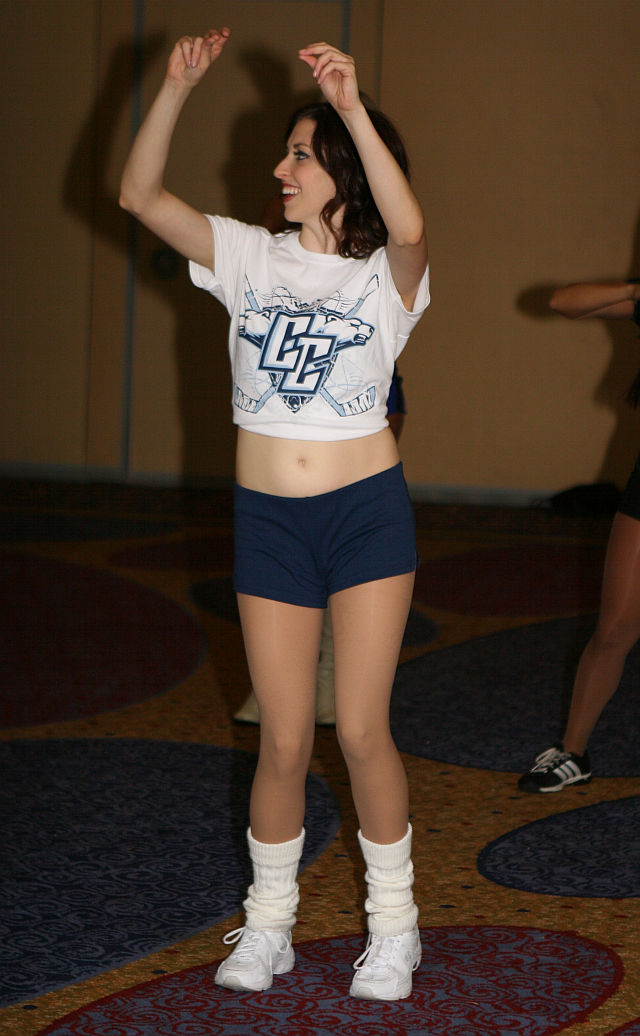 On her way back home, Sheena was flying out of Orlando and had two layover choices: Atlanta or Charlotte. She chose Charlotte and they met for coffee during her layover. She did the long distance relationship thing for about a year, then moved to Charlotte, got married, and now they’re one happy family.

Sheena now teaches middle school and high school French. And while she loves Charlotte, one day she was homesick for Canada. So she went to a Charlotte Checkers hockey game, where she saw the Checkers Dance Team, The Checkmates. Since she was young she had always enjoyed dancing and performing. So she talked to Director Brandii McCoy and learned more about the organization, attended a prep class and made the team this past August.