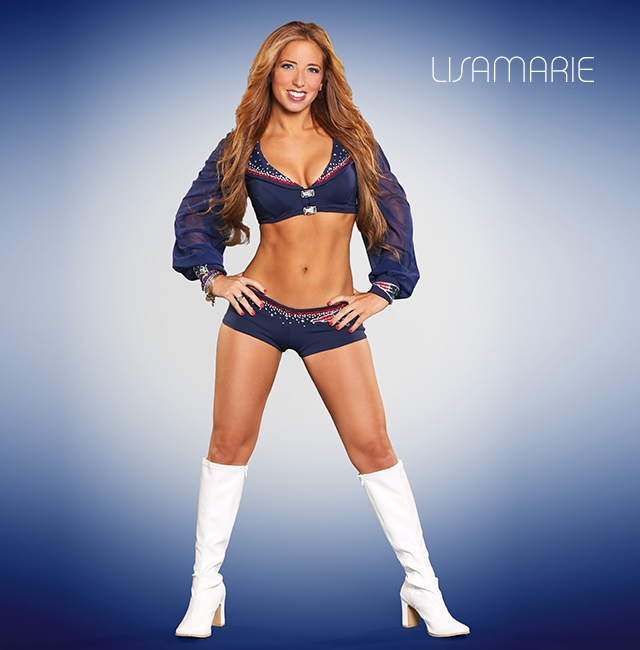 Need some hints for hosting a super-terrific Super Bowl bash? Let us assist you, by asking LisaMarie, a perfect combination of football/culinary expertise, as both a pastry chef and New England Patriots Cheerleader. If she were hosting a Super Bowl party, what would she whip up for guests to be the perfect Super Bowl game cuisine? “Miniature dishes are key!” LisaMarie responds. “Who doesn’t like to be able to pick up a little bite of something and not need a plate? Deviled eggs are a huge hit. You can make them spicy, sweet or spike them with an outrageous ingredient like smoked salmon!”

But this Super Bowl, LisaMarie will not be hosting a party, as she will be at the biggest party of all, cheering and dancing at the game itself! What is it like to be part of a Super Bowl team? LisaMarie answers, “Surreal. Pinch me! This season has been absolutely incredible. I feel very lucky to be able to share this special game with my teammates and cheer on my favorite team at the Super Bowl.”

LisaMarie shared with UltimateCheerleaders some surprising challenges of being a pastry chef, why her sister is on her Mount Rushmore of favorite musicians, and how her ultimate culinary goal combines food and football.

LisaMarie’s life’s journey took her from New York to New Jersey to New England. “My mother is originally from Long Island, New York, and my father is from Brooklyn, New York,” LisaMarie explains. “They met at SUNY Buffalo in college and after finishing their studies they were married and started a family together. My older sister, Chevonne, and I were born in New York City and were raised in Bergen County, New Jersey.” 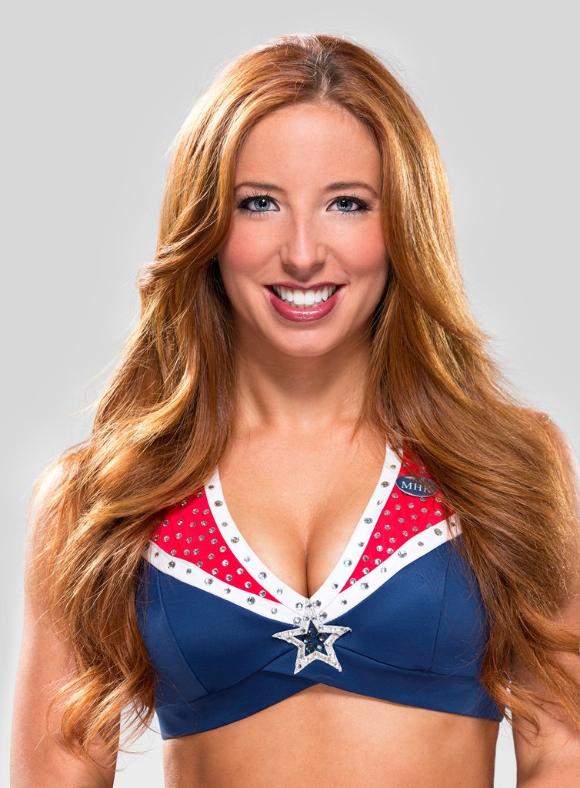 Having an older sister added to LisaMarie’s own drive to excellence. “Growing up, Chevonne and I were very competitive,” LisaMarie says. “Not only did she excel in the classroom but she was an extremely talented singer, performer, and competitive dancer. Naturally I looked up to her and wanted to be just like my older sister.”

Today, LisaMarie is involved with so many things, from a busy vocation to several avocations, including scuba. Was she always a high energy youngster? “Since I was such a high-energy child, I was involved in an immense amount of activities,” reports LisaMarie. “I started playing the classical violin at age four, as well as the piano. I went to tennis lessons, gymnastics, soccer, basketball, softball, and dance classes. Eventually as I became older, it was evident that I needed to make choices on what I wanted to focus my time on. I was a great soccer player but I chose to focus on competitive dancing since my sister was so into it. It was definitely the right choice!”

Dance has been part of LisaMarie’s life for about as long as she can remember. “I started dancing at age two-and-a-half,” shares LisaMarie. “Chevonne was four years older than me, and already performing in dance recitals. I wanted so badly to be dancing in them as well! Besides taking classes in ballet, tap, jazz and hip-hop, I was always creating routines with my sister and singing made up songs throughout the house. It was always one giant performance.”

And leading up to the Patriots, LisaMarie was part of numerous dance teams. “I competed with the traveling competition team at ‘In the Spotlight Dance Studio’ in Waldwick, New Jersey, from age eight until high school,” LisaMarie says. “I went to Muhlenberg College to study Theater and I tried out for their performance team ‘Mint*’. I danced on the squad for all four years of college as well as served as captain for the final two. I couldn’t get enough of dancing while I was at college so I also auditioned for the Philadelphia Kixx and danced with them before their season sadly ended in 2010. My senior year at Muhlenberg I danced with the Lehigh Valley Steel Hawks ‘Precious Metals’ in its first season as an organization.” 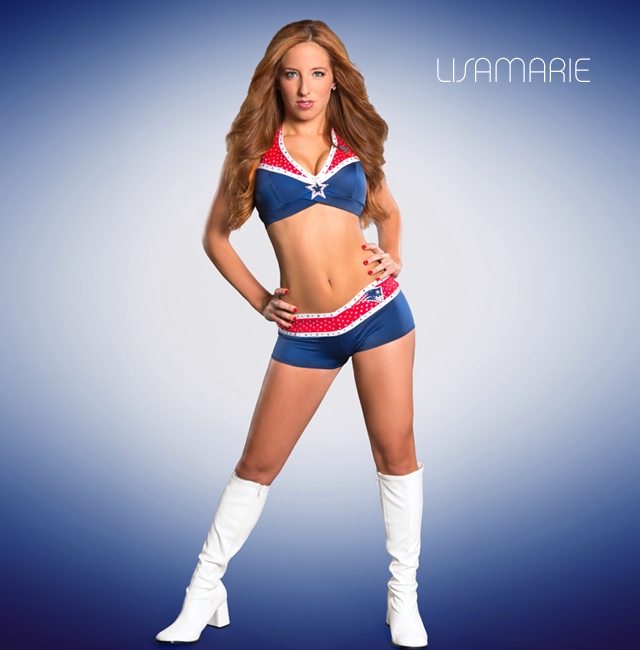 Plays played a big part of her youth, too, and LisaMarie studied Theatre at Allentown, Pennsylvania’s Muhlenberg College. “I have been performing in theatre productions since the third grade,” LisaMarie says. “My first role was playing Grace Farrell in Annie. My favorite role had to be when I played ‘Lola’ in Damn Yankees as a junior in high school. I was nominated for ‘Best Vocal Performance’ in the State of New Jersey.”

Yet with a life of performance, the call of the kitchen was always there for LisaMarie. “I have always been interested in cooking and baking!” explains LisaMarie. “Whenever I was home from dancing, singing or acting, I was making a complete mess in the kitchen. My first cookbook was Semi-Homemade with Sandra Lee. I attempted to create desserts and dishes like Sandra created in her book, however, they never really came out the same. My absolute favorite thing to do over the weekend was to open up a page in the book and just try to re-create one of the recipes from it. I had always wanted to go to culinary school yet I had spent so much time focusing on singing, dancing and acting that my skills in the kitchen weren’t so great. I figured if it was meant to be it would work out eventually.”

And it did! LisaMarie attends Johnson & Wales University studying in Culinary Arts/Chef Training. What are some of the unexpected challenges for a pastry chef in training? “Some people may not realize just how hard it is to keep your chef whites, WHITE,” explains LisaMarie. “As a chef, you are required to keep your uniform clean, crisp and extremely white yet you are performing tasks that are very messy and stain easily! Not only do you need to be able to cook or bake delicious and beautifully presented items, you must be polished and presentable yourself.”

“Also, now that I am a Chef, it is challenging to go out to eat,” LisaMarie continues. “I find myself picking out short cuts that places may have taken when creating something or mumbling over high prices that I could make myself from scratch less expensively.”

END_OF_DOCUMENT_TOKEN_TO_BE_REPLACED 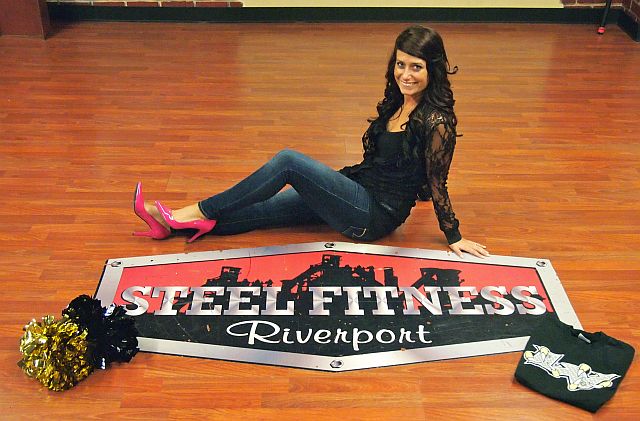 The Lehigh Valley Steelhawks, Precious Metals have announced tryouts for the 2014 season. Tryouts will be held Sunday, October 27th from 1-4 pm. Tryouts will be at Steel Fitness Riverport, 15 W. 2nd Street Bethlehem, Pa 18015. There is a $30 cash tryout fee to be paid at the door which includes a Steelhawks t-shirt. Here’s your shot at becoming a member of the best professional dance team in the PIFL.

The audition will consist of three rounds in which all candidates will be judged on personal appearance and fitness, personality, performance of an instructed routine, technical skills, and a bikini interview. Candidates will also perform one minute of her own choreography. All candidates must be 18 and out of high school in order to audition. Please bring a photo ID. For more information and any questions, please contact Precious Metal Dance Coordinator Arenda DiPasquale at arendadipasquale@yahoo.com. 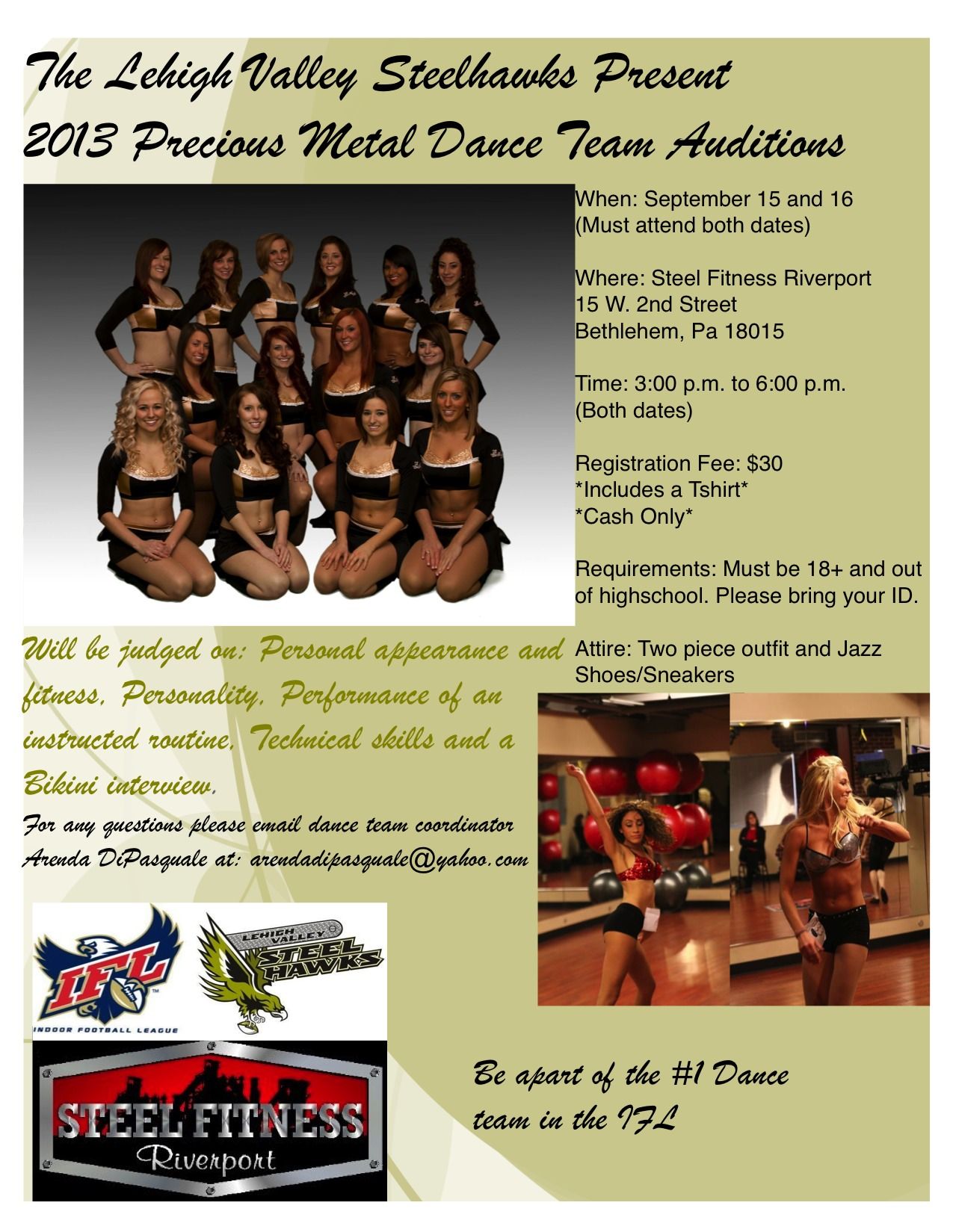 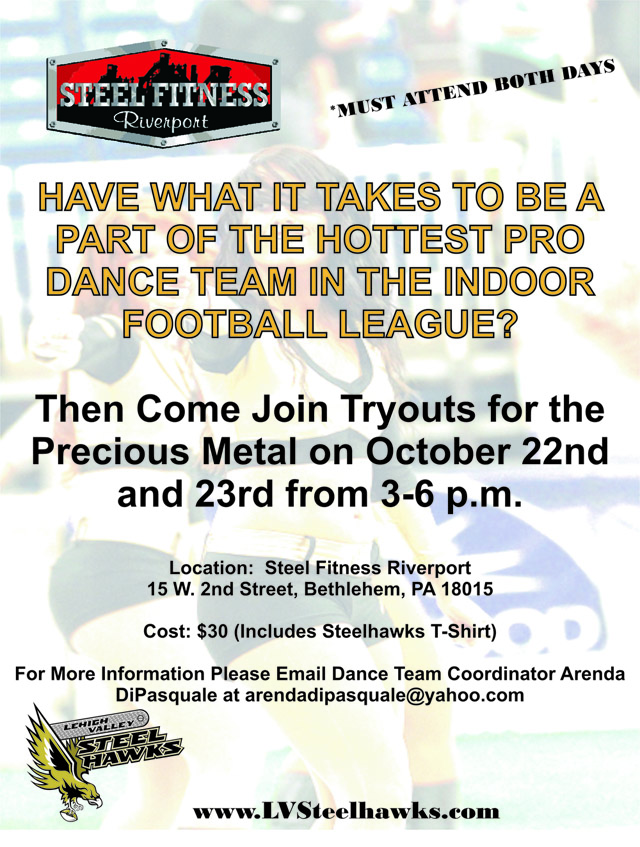 The Lehigh Valley Steelhawks and their dance team Precious Metal are proud to announce a new dance coordinator for the 2012 season, Arenda DiPasquale. Arenda was born in Easton, Pa and started her dance career at the prime age of three at Nardis Dance Studio. She’s taken all genres of dance including Ballet, Jazz, Hip-Hop, Tap, Lyrical, Modern, Contemporary and Theater. After graduating from Easton Area High School in 2007 she continued her education as a Dance and Business Management major. Arenda has been a part of various dance company’s and semi pro/pro dance teams including Monarch Dance Company, Acta non Verba, Lehigh Valley Storm and Lehigh Valley Lady Outlawz. Last season she served as a captain for the Precious Metal dance team and choreographed crowd appealing routines as well as assembled the first annual youth dance clinic at Stabler arena. She has also been teaching dance technique throughout the Lehigh Valley for the past 4 years and is currently an instructor at Nardis Dance Studio. Arenda hopes to one day own and operate her own studio in the Lehigh Valley and her ambitious attitude will help to make this season’s dance team be the best in the IFL.

An open tryout has been announced to become a member of the Precious Metals dance squad for September 17th from 5-8pm and September 18th from 3-6pm. Interested dancers are invited to attend the two day tryout held at Steel Fitness Riverport, 15 W. 2nd Street Bethlehem, Pa 18015. There is a $30 cash tryout fee to be paid at the door. For more information on the Precious Metals or about the tryout, Dance Coordinator Arenda can be reached via email at arendadipasquale@yahoo.com. 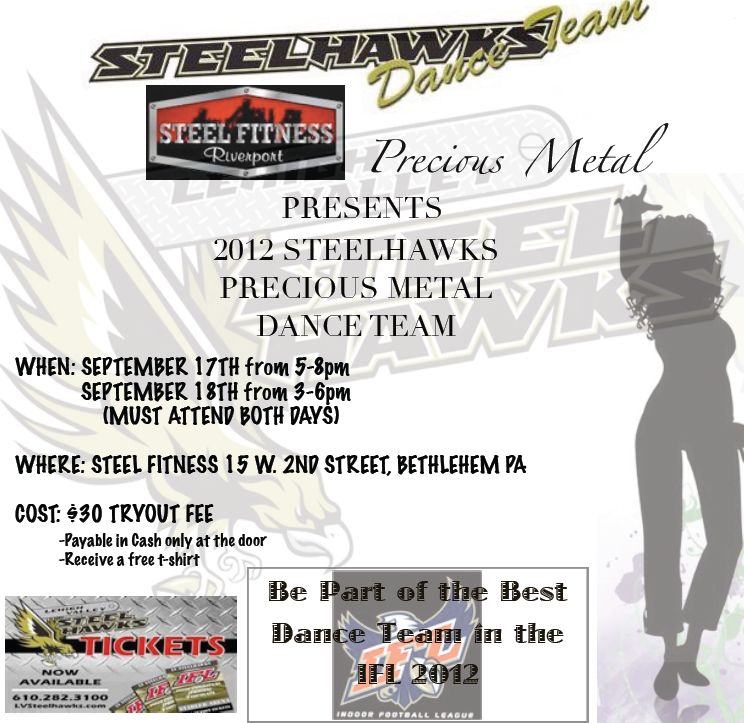 “Tracey is the perfect person to build and lead our young squad heading into our first season here in the IFL,” stated Executive Vice President Mike Clark. “To be the best, you have to find the best, and with Tracey we are getting years of dance experience and large ambitions to establish the league’s best dance team in 2011.”

Born in Wilson, Pa Stanton started her dance training at Miss Pat’s Stage Door Studio at the age of 6. She then moved to the Diane Mederios Academy of Dance in Coopersburg, Pa. where she danced and taught for 9 years. She has participated and won many awards not only for her dancing but also for her choreography. In 2002 and 2003, she spent her summers teaching cheerleading camps around the Pennsylvania and New Jersey areas for Universal Cheerleaders Association.