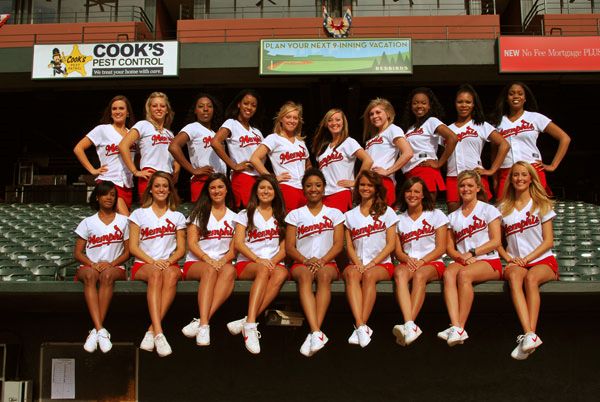 The 2010 Redhots squad will be an energetic and dynamic promotional squad who will be highly visible at Redbirds’ games and in the community. The Redhots bring tremendous amounts of energy to the Redbirds’ organization, adding to the overall entertainment value of each and every home game. Redhots participate nightly in in-game promotions and interact with fans entering & exiting the ballpark.

The Redhots’ energy is carried over into the community as they are an important part of the Redbirds in and outside of AutoZone Park. Along with their presence at each Redbirds’ home game, this attractive and talented group of women will make numerous appearances at trade shows, promotional events, and charitable events in Memphis and the surrounding communities.

Interviews for the 2010 RedHots squad will take place in early 2010. To be considered for an interview, please send a resume and full body photo to Jessica McDaniel or 175 Toyota Plaza, Suite 300, Memphis, TN 38103. You must be 18 years or older by April 16, 2009. Additions to the squad will be based on appearance, personality, and baseball knowledge.

This group doesn’t just think they can dance, they know they can. But the Surge dancers still seem to be a too-well-kept secret. You need to see them to understand the level of talent we’re dealing with here. 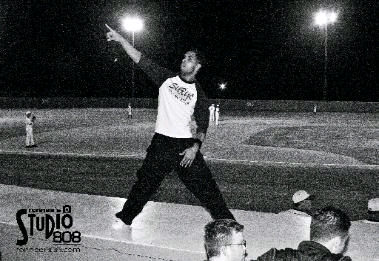 Gee “GB” Bethancourt, 28, and his wife, Colleen, 29, own Evolution Dance Center in Port St. John. They have brought years of experience dancing and choreographing to Brevard County, and are part of the five-member Surge Dancers that perform at all home games for the Florida Winter Baseball League team — the Space Coast Surge — based at Cocoa Expo.

My first impression when seeing the Surge Dancers do their thing at a sparsely attended Surge game on Halloween night: Wow, this is very high-level entertainment for Brevard County. I could watch them dance all night.

So it came as no surprise when I learned that the Bethancourts have been working with the Orlando Magic, choreographing for their dance team since 2002. Or that Colleen, a master choreographer, worked in Las Vegas and with Disney. GB has worked for Universal Studios and with Aretha Franklin and Marc Anthony.

And after coming to understand the sincere passion they have for what they do, it’s refreshing to hear they are teaching and sharing their talents with local children and teens, and do a lot of work with non-profit organizations.

The Bethancourts moved to Brevard from Orlando and opened Evolution Dance Center in August 2007.

“We wanted to bring what we do to this side of town,” GB said. “The arts needed a push.”

“I will say that it has been tough, but people are starting to open their minds to something new and different,” GB said.

The dance team does short routines between innings, interacts with the crowd and hosts fun fan activities on the field.

A random meeting with Surge general manager Sean Boudreaux led to the gig. When asked what they could do, GB said: “You give me the green light . . . we’ll choreograph some routines and dance on top of the dugout.”

That’s exactly what they do, GB throwing in some unfathomably high backflips. The dance team also supports and motivates the players.

“We’re really getting into the games, cheering for the team,” Colleen said. “We’re not just there to dance, we’re there supporting the team.”

The Surge are 2-13, and in last place of the four-team league. They only had three home games before hitting the road for most of November. Not much time to build a fan base.

“Whether there’s one or 1,000 (fans), we’re still going to be the same,” GB said. “We still have to provide the entertainment. It does not matter, really. Yes, of course if you had 1,000 people sitting in these stands, the energy of the game would be a whole lot better. But you can’t rely on that if you are the entertainment.”

The Surge’s next home games start on Nov. 27, when Brevard fans can check out both the professional baseball and professional dance talent through the middle of January. Not bad for a $5 general admission ticket.

“When I first found Gee Bethancourt I could not believe that level of talent would be available to us here locally,” Boudreaux said. “Their diversity makes it a good fit for any audience of any age or background. I truly feel it is equivalent to NBA entertainment at a baseball game.”

But don’t take our word for it. Go catch some winter baseball and energized entertainment.

Fenway Park might have the Green Monster, the Pesky Pole and all of its legendary retired Red Sox numbers, but Campanelli Stadium and the Brockton Rox have something that not even Fenway can offer — cheerleaders.

The Roxies, who are in their first year of existence, are made up of 11 college-aged women from around the area and Boston.

They can be seen dancing on the field between innings, greeting fans at the entrance gates and walking around the concourse during games. 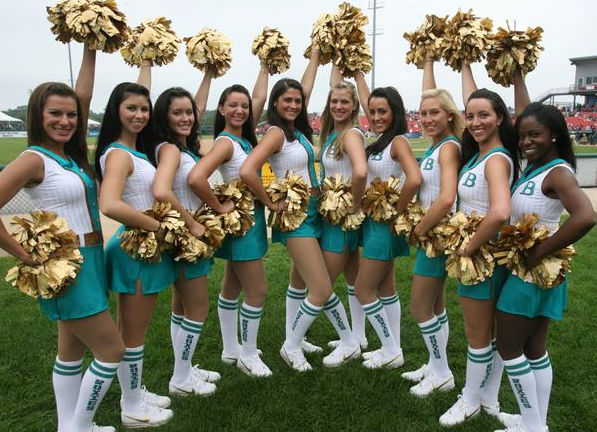 Terry Perrotta, the coach of the Roxies, is the main reason for their creation.

“The Rox thought that having cheerleaders was a great idea when I brought it up,” said the Hyde Park resident. “They thought it would really add to the family atmosphere at the stadium.”

Perrotta had worked with many of the women before at a dance studio, but held an open tryout anyway.

“We had about 40 women show up for tryouts,” said Perrotta. “It was really hard to cut them down to only 11.”

Of the 11 women selected, eight of them had previous experience with Perrotta.

“Having a lot of us that knew each other before made it really easy to work together,” said Roxie Christine Campbell of Milton. “The other three blended in really smoothly and it has been great.

The squad, which appears at every Friday, Saturday, Sunday and most Thursday home games, practices Wednesday nights at Campanelli Stadium for a couple hours.

The Roxies have all been dancing for most of their lives, but being a “cheerleader” is a new experience for a lot of them.

“Cheering is something new for a lot of us,” said Campbell, who is majoring in Crime and Justice Studies at Suffolk University. “We’ve danced forever, so it hasn’t been too big of an adjustment.”

Once the crew began performing at Rox home games, they were quickly labeled as cheerleaders, but most of the women don’t think that it’s an appropriate label.

“We get called cheerleaders a lot because we have the pom-poms,” said Campbell.

While the women do a fair amount of dancing, they see it is the least important aspect of their job.

“We really do more interacting with the fans and promotional stuff than actual cheering,” said Norton. “This is such a family environment, and we try to add to that.”

Outfitted in white, gold and teal uniforms with gold pom-poms, the women spend most of the game walking around Campanelli Stadium talking to fans from the front row to the luxury boxes.

“Being approachable is definitely the most important part of our job,” said Changeau, a registered nurse and recent grad of Regis College. “Being able to talk to people is more important than the dancing.”

One fan who frequently socializes with the Roxies is Michael Godina.

The youngster is arguably their biggest fan and carries a picture of the Roxies with him during games with hopes of getting all of their autographs.

“I come to a lot of the games, especially when the Roxies are here,” said Godina. “I just love them.”

The Roxies have become popular at Campanelli Stadium, so it is surprising to see that more teams do not have cheerleaders.

“I know that Quebec does (have cheerleaders) and New Jersey does,” said Perrotta. “But I’m really surprised that it hasn’t caught on more.”

Major League Baseball has a few organizations with cheerleaders, but, oddly enough, they are teams that struggle mightily with attendance.

The Florida Marlins’ Mermaids don’t exactly rake in fans the way that the organization would like, and neither do the cheerleaders for the Cincinnati Reds.

Although cheerleaders, or dancers, aren’t common for baseball teams, the Brockton Roxies hope to continue on in the future.

“We’ll be back next year,” said Perrotta. “Hopefully, we can bring back a lot of the same girls from this year, but we’re always up for some newcomers.”

Even if next year’s Roxies have some new members, they will always have fans like Godina, who seem to pay more attention to the cheerleaders than to the baseball game.

The Roxies hope that they will be around for years to come and that perhaps even more baseball teams will begin to follow suit.