Told by doctors as a youth that she would never walk again, a determined and inspirational Jennifer Chang not only walks but dances and cheers, making the world-renowned Miami Dolphins cheerleading team.

It’s been some journey for the talented young lady.

She and her family (mom, dad, sister) defected from Cuba to Miami 11 years ago. They stayed with her uncle in Palmetto Bay. Assimilating to their new country, she learned a new language while learning to walk again.

Jennifer and her family overcame plenty, sticking together and supporting each other. During the final auditions for the Dolphins cheerleaders on Sunday, May 1, they proudly watched Jennifer make the team.

Final auditions for the 2016 version of the Dolphins cheerleaders were at the Miniaci Theater at Nova Southeastern University in (South Florida) Davie. The practice/training facility for the Dolphins’ football team is across the way.

Residing in Kendall and studying to be a nurse, Jennifer, 20, is a graduate of Palmetto Sr. High School and Miami Dade College.

Of 70 beautiful finalists, she was one of 40 selected for the team. They will attend the Dolphins Cheerleading Training Camp. There are no mandatory cuts at training camp, but if a team member does not attend or can not pick up the cheers/dances, she can be cut.

Twenty of the 70 who qualified for the finals were from other countries. The Dolphins became the first NFL team (and pro sports team) to host auditions internationally, traveling to Bogota, Colombia; Buenos Aires, Argentina; Mexico City, Mexico; and Rio de Janeiro, Brazil. Eleven of the final 40 chosen were from the international auditions.

The Miami Dolphins Cheerleaders at the Miniaci Theater at Nova Southeastern University selected 40 lovely and talented women to advance as Training Camp Candidates. These ladies will participate in a seven-week boot camp that consists of workouts, etiquette training, team building, uniform fittings, look development and performance training. Cuts are not mandatory but are possible during training camp.

The 40 were selected from the largest turnout for Miami Dolphins Cheerleader Auditions.

More than 800 ladies registered to be the next Miami Dolphins Cheerleader, as the organization became the first NFL team (and pro sports team) to host auditions internationally, searching for enthusiastic, charismatic and talented women in Bogota, Colombia; Buenos Aires, Argentina; Mexico City, Mexico; Rio de Janeiro, Brazil and South Florida to represent one of the most prestigious teams in the NFL.

Jessica and Monica are two women with Miami roots who are firmly planted within the Miami Dolphins Cheerleading infrastructure.

Jessica was chosen for the squad on May 1 for the fifth consecutive year and Monica heard her named called for the fourth time.

Nothing is given. They again earned it.

Just because you were a member of the team the previous year does not automatically grant you a spot for next season’s team. There are no multi-year or guaranteed contacts with NFL cheerleaders. If you want to remain a member of the team, you have to tryout and show well.

Jessica and Monica did just that.

Jessica, a graduate of Ronald Reagan High School in Doral, is a college student.

Very beautiful, Monica twice graced the cover of the Miami Dolphins Cheerleaders Swimsuit Calendar. Her mom, Lily, who cheered from the crowd for her at the audition finals on May 1, is very proud.

WCPO.com CINCINNATI — The Cincinnati Ben-Gals hosted their final round of auditions for the 2016 squad May 1 at the 20th Century Theater in Oakley.

DENVER — The 2016 Broncos cheerleading squad was introduced in front of a packed house Sunday night.

The roster consists of 16 veterans and 10 rookies. The final auditions took place at the University of Denver’s Gates Concert Hall. The seating capacity is about 1,000 and nearly every seat was full as the cheerleaders put on a show for the fans.

Natalie is a student at the University of Colorado and can now call herself a Broncos cheerleader.

Kate made the squad for the fourth season in a row, and she said the feeling never gets old.

“It feels amazing every time,” she said. “You know how amazing this team is and you want it that much more every year.”

Now that auditions are complete, next up is the famous swimsuit calendar photo shoot in Mexico. 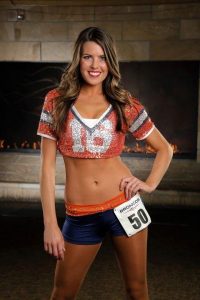 [Watch the Videos]
[Photos from Finals]

DENVER — The Broncos players are back preparing for the 2016 season, and the team’s cheerleading squad has done the same, finishing up their auditions to narrow down their list of 48 finalists to the final team.

New seasons bring new, talented dancers to the tryouts, and that adds competition for the cheerleaders who are looking to return to the team for another season. What’s unique about this year’s tryouts, though, is that one dancer set a team record with her eight time making the cheerleading squad.

“I’m very excited and very honored to be back for an eighth season,” Christina said. “It never gets easier. It actually gets harder every single year trying to earn your spot back and there are so many incredibly talented women that try out every year, so I’m just very humbled and excited to be back.”

Over the past eight years, she’s seen the squad evolve in some ways and stick to its same prestige at the same time.

“It evolves with women every year, but the legacy is the same,” Christina said. “The program that [former Broncos Director of Cheerleaders] Teresa Shear started and then [current Director of Cheerleaders] Shawna [Peters] has done an amazing job of carrying it on. It has the same roles; it has the same legacy to it and I just feel like each year it’s a brand new group of amazing women that just carry on that legacy.”

While Christina continues her historic run with the Broncos cheerleaders, some select women are just beginning theirs, like one rookie, Sydney.

“Every audition process is tough. I respect any woman who goes and puts herself out there and goes through this whole week of routines and choreography,” she said. “It’s hard on your body and it’s hard on your mind, but the tough ones stick it out, and I just have so much respect for anyone who auditions for any team.”

Now that her entrance onto the team is secured, Sydney is excited to get to the most thrilling part of the gig on game day.

“I am looking forward to walking out of that tunnel when there’s Broncos players running through the middle, and just performing on the sidelines for the best fans in America.” 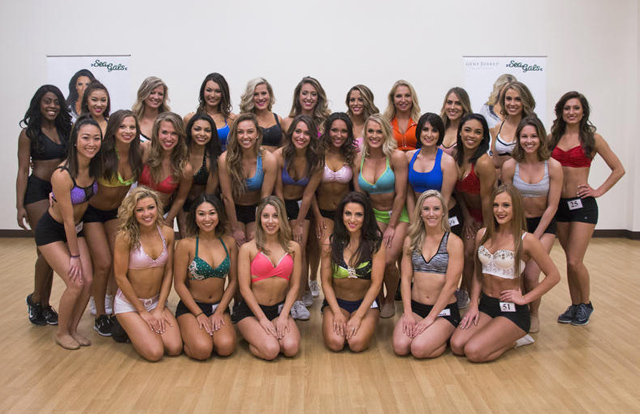 The Sea Gals began their search for their 2016 squad by holding an open audition at the Virginia Mason Athletic Center. [Watch Video] [Photo Gallery]

The Sea Gals semi-finals auditions are complete. Find out who moves on to compete for a spot on the 2016 roster! [Watch Video] [Photo Gallery]