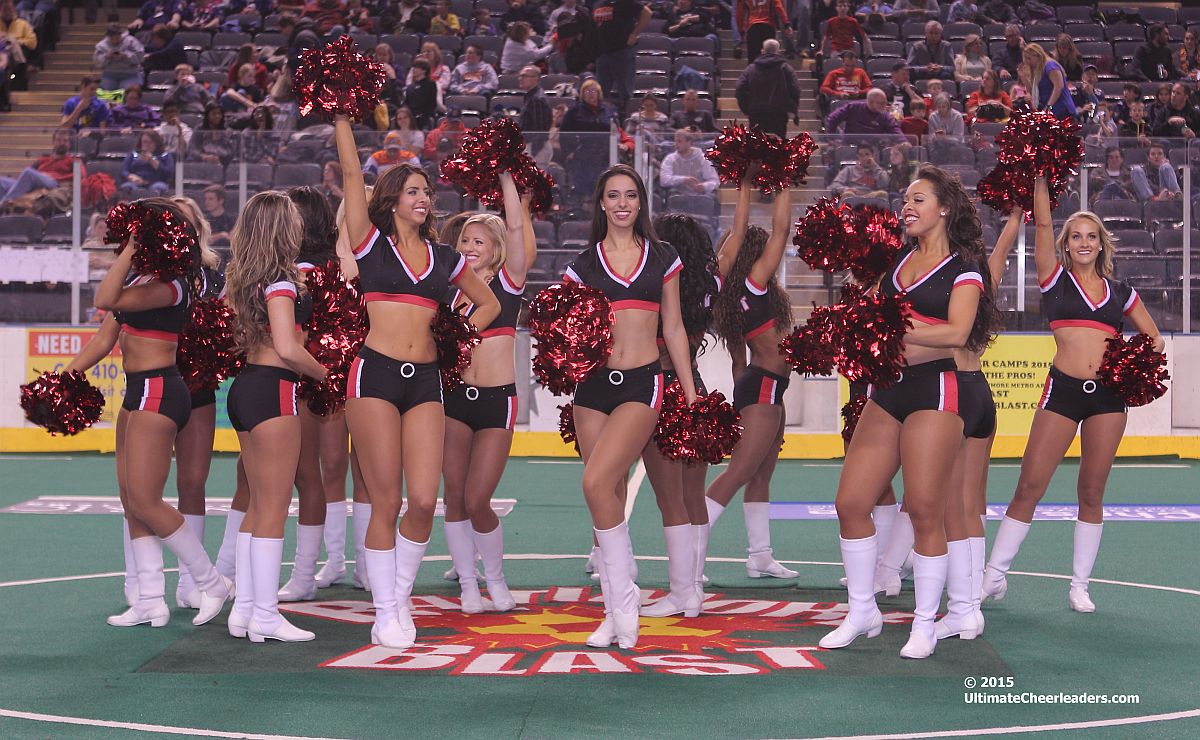 Blast Cheerleaders on the field at halftime 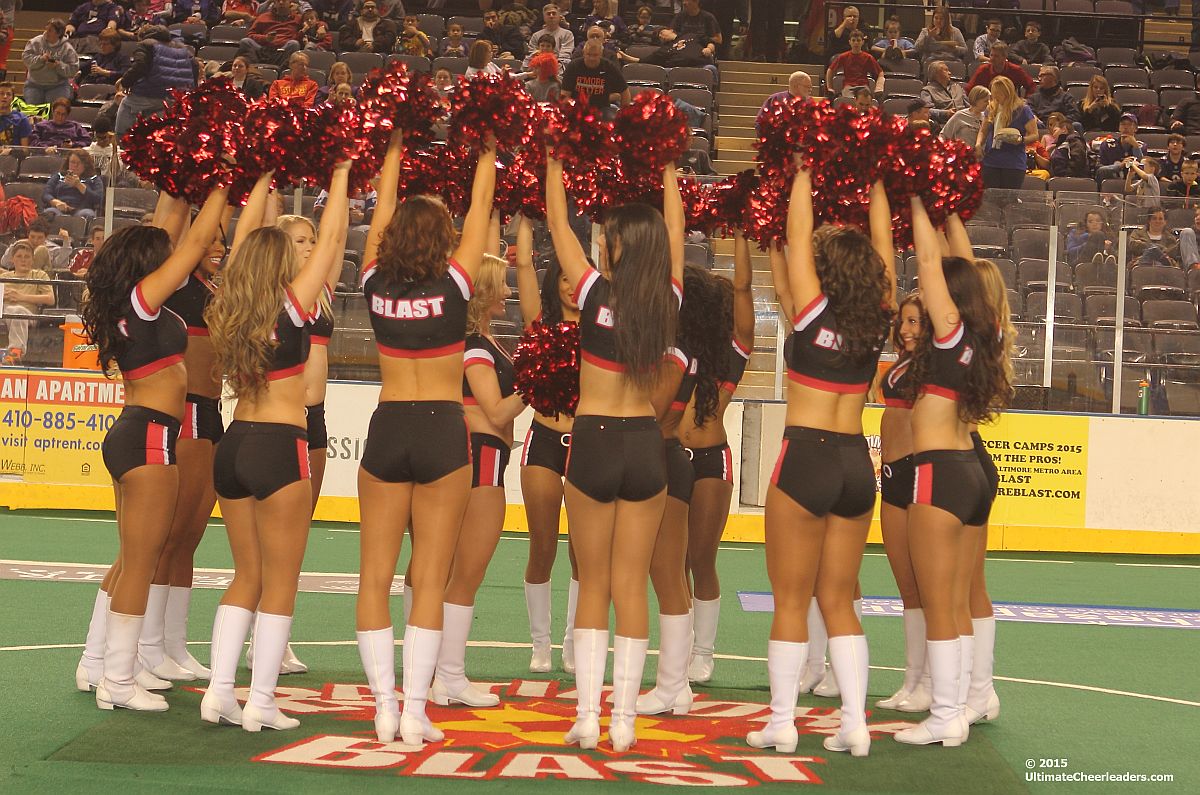 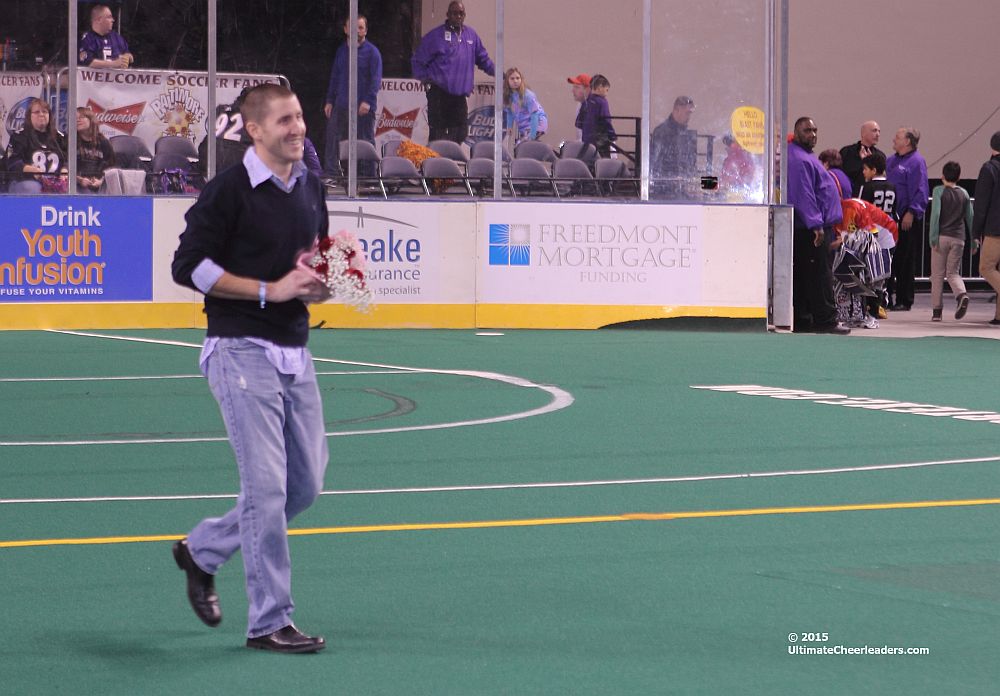 But wait, there’s someone on the field! 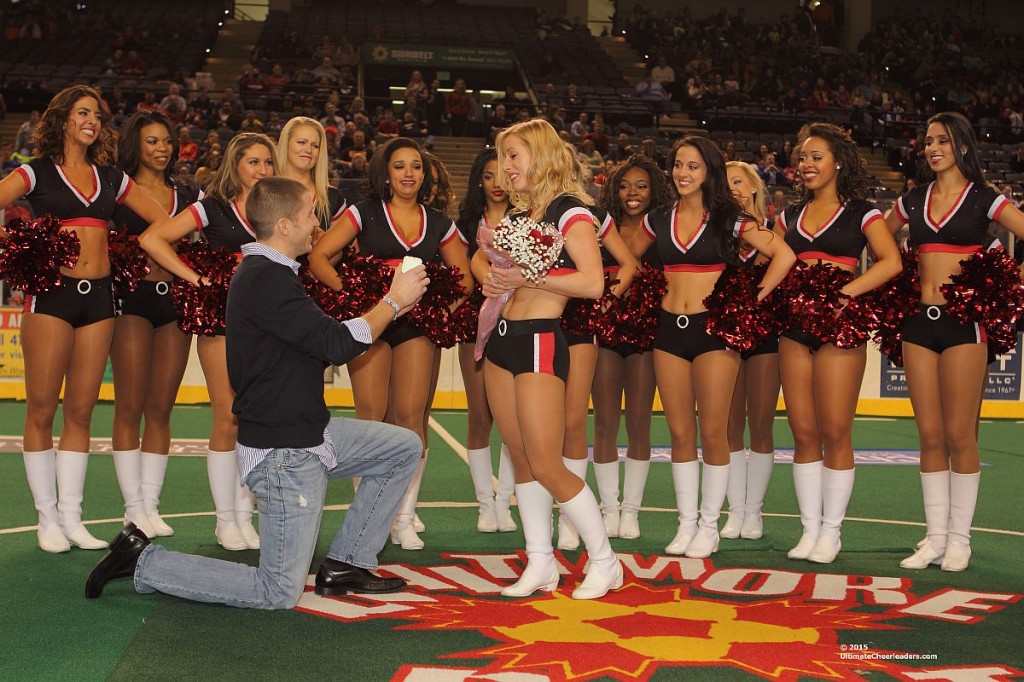 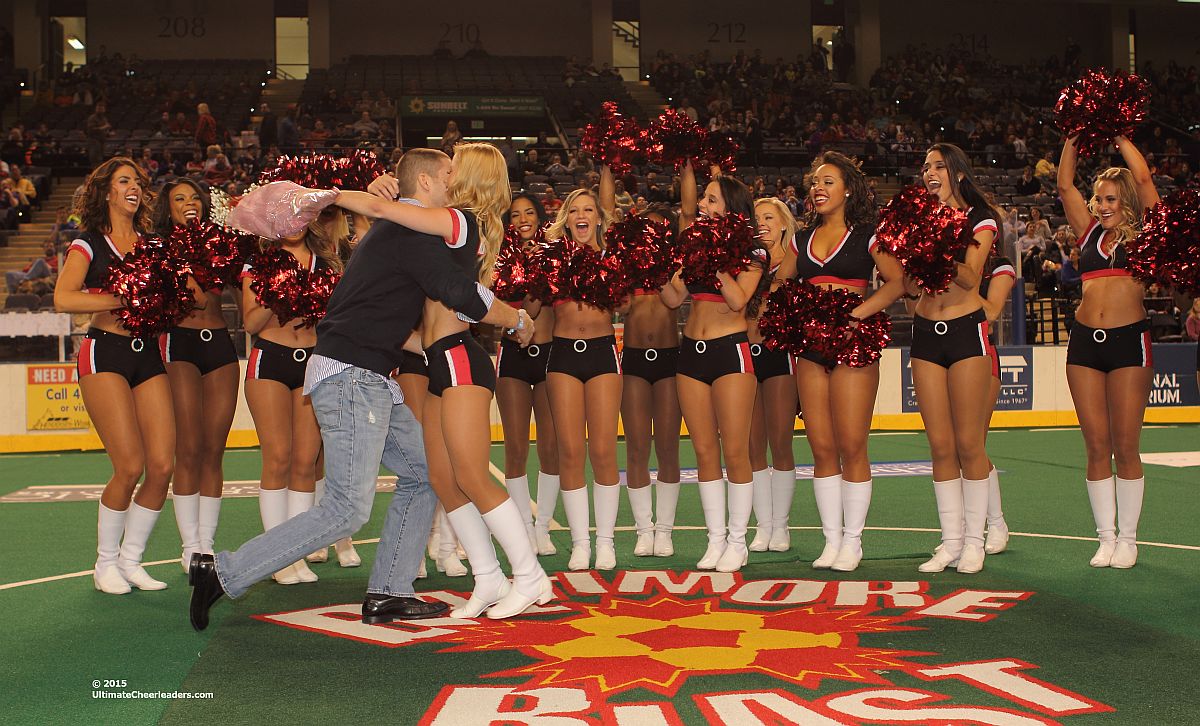 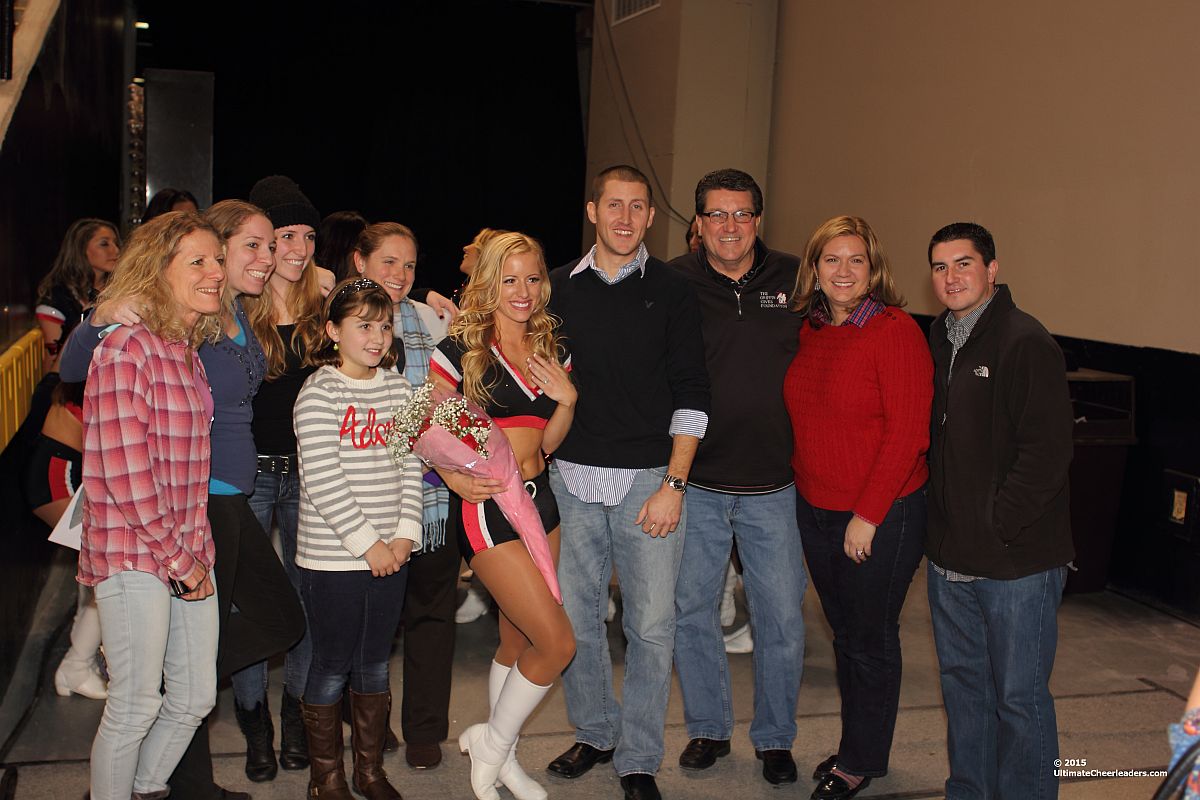 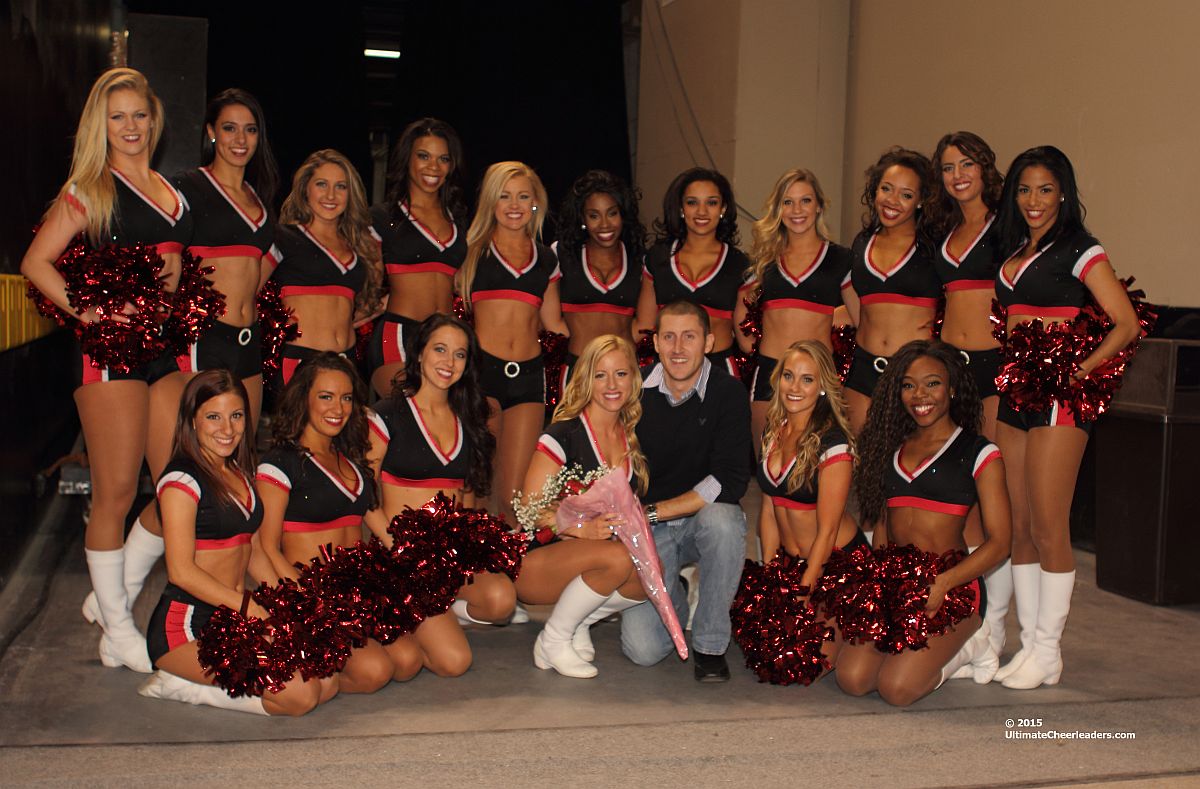 With the Blast Cheerleaders 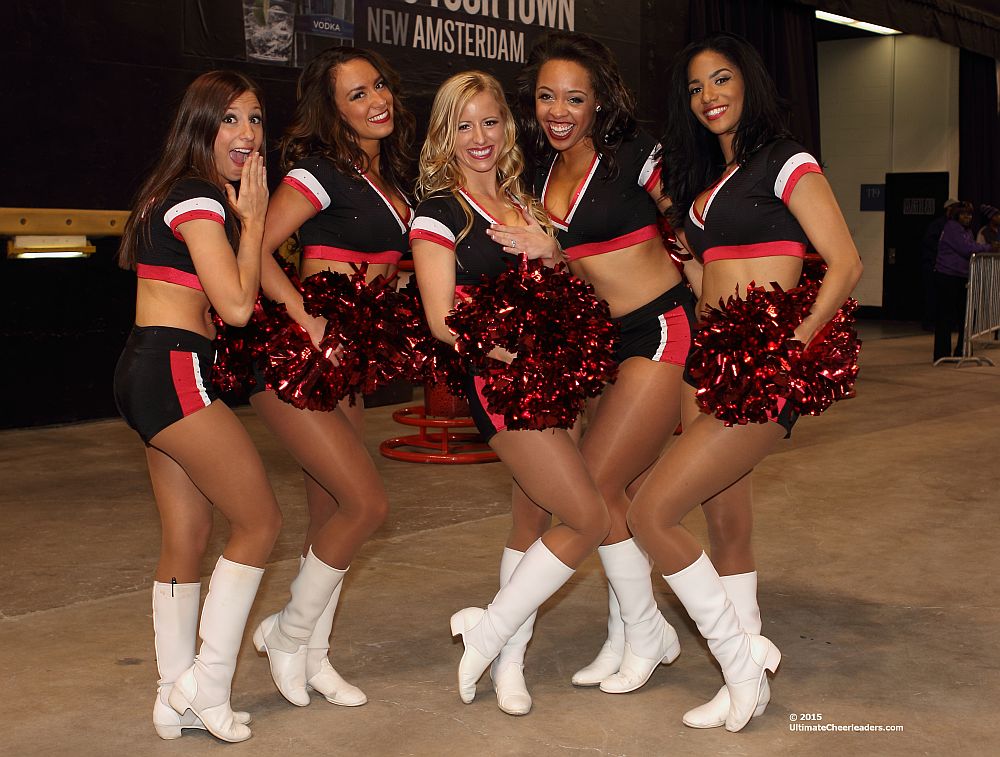 Showing off the ring! 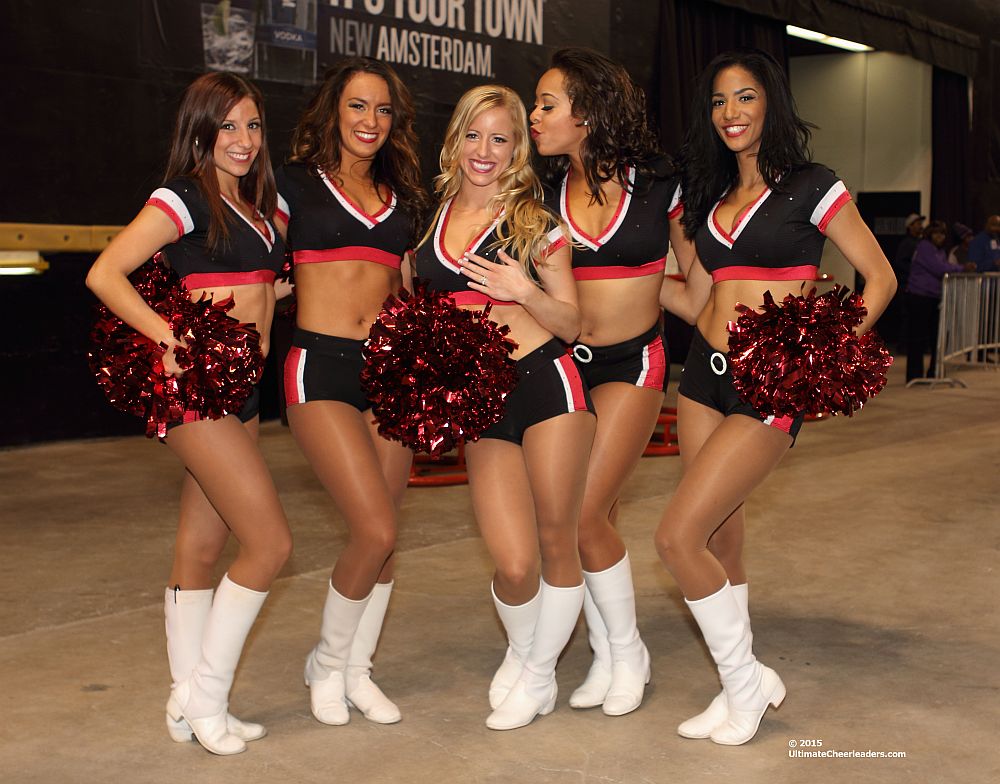 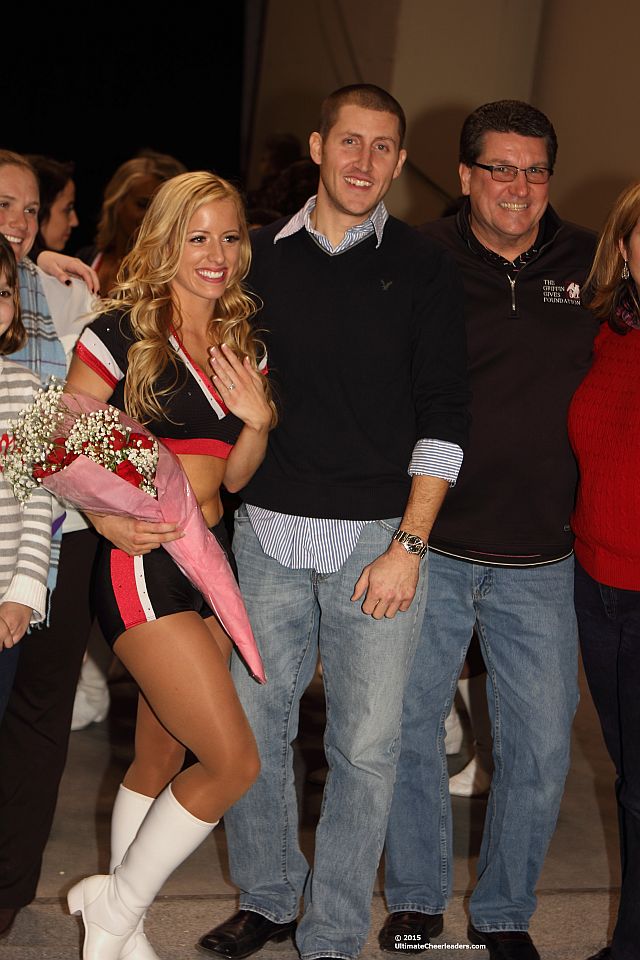 At halftime, the Rams Cheerleaders lined up at midfield to watch a highlights video. But instead, it was a proposal from Drew, and eventually he was on the field on one knee. Karielle said yes and a super big group hug ensued.

When Karielle returned to the sidelines for the third quarter, the fans cheered in support of her change in status.

Karielle is originally from Kansas City, was on the Golden Girls dance team at University of Missouri, and now is a Rams Cheerleader. What a way to end the season!

But I must ask, usually the surprise proposal this time of year is the future groom dressed as Santi Claus, and also the Rams Cheerleaders were not donned in any holiday apparel during the game. Did the Grinch claim he was taking their Christmas-y costumes to the North Pole for emergency mending? Well, just like Christmas in Whoville, the joy of the Karielle-Drew engagement could not have been more joyous than it was. 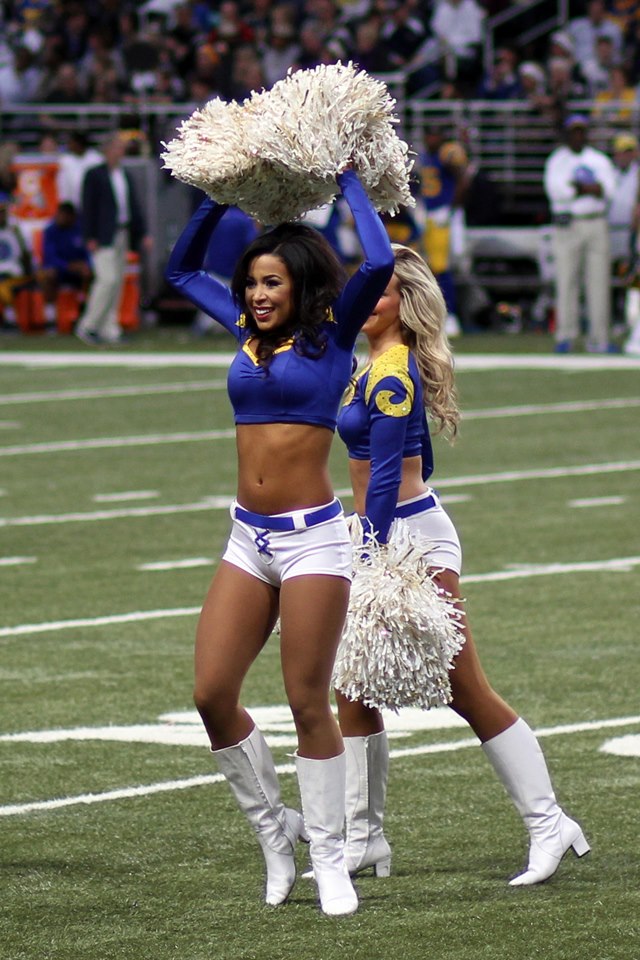 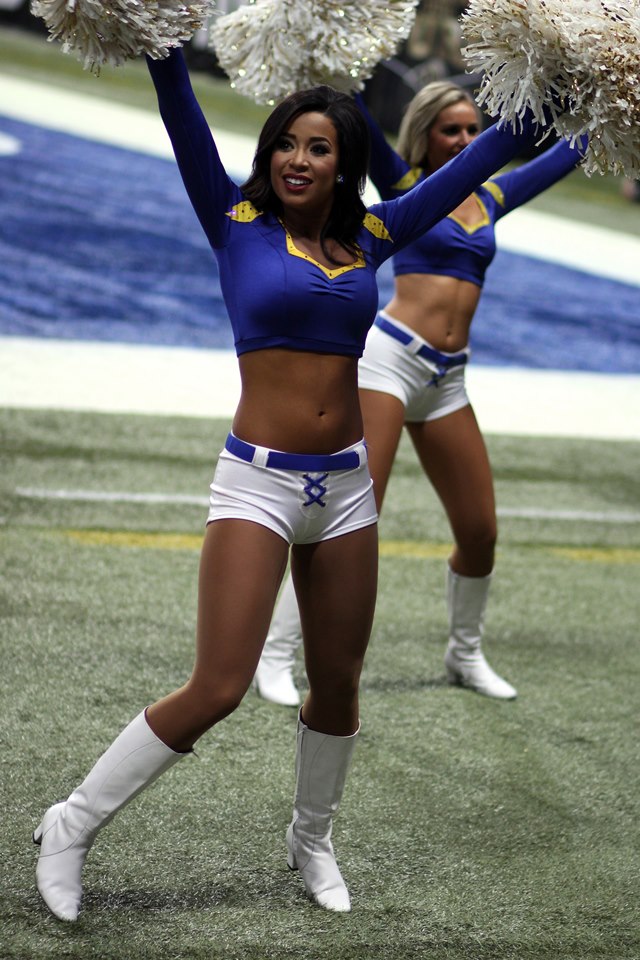 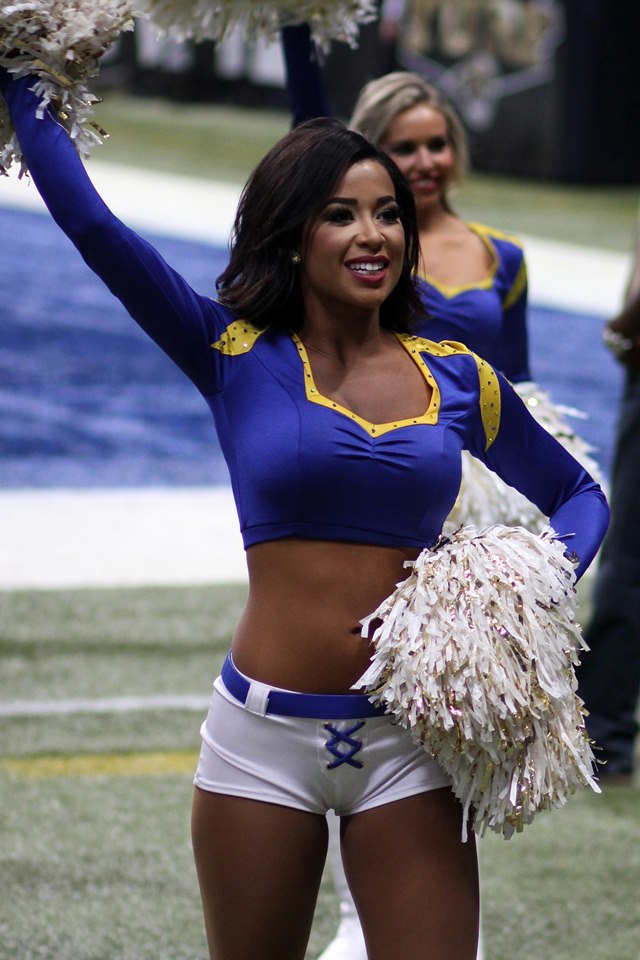 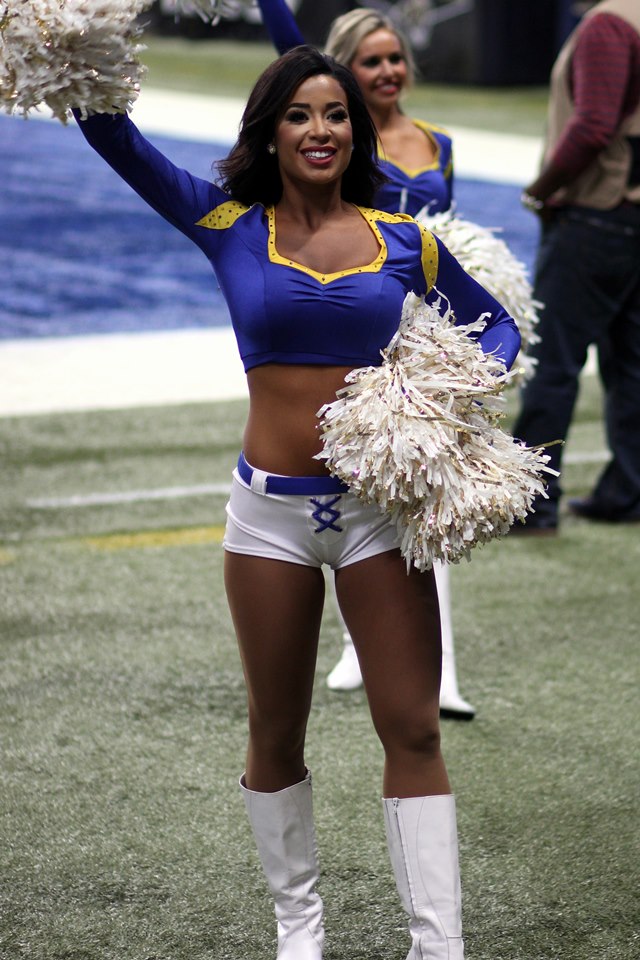 More photos of engaging Karielle are at this link.

Perhaps you think that it’s rather cliché to ask your significant other to marry you in front of tens of thousands of people at a sporting event, where your answer will be recorded on the stadium’s video board. 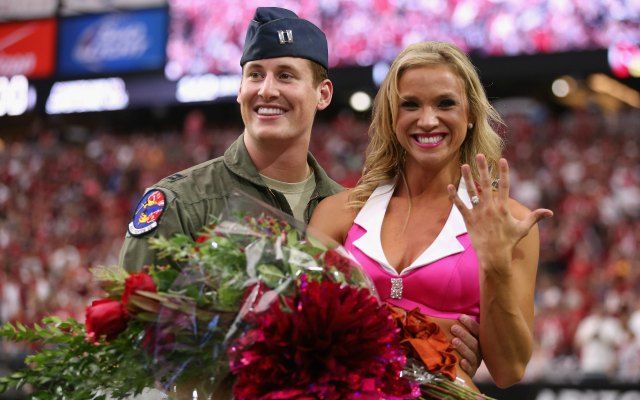 But what if the marriage proposal took place on the field among your work colleagues, and he was dressed handsomely in his military uniform? That would be a pretty tough request to turn down, right?

Fortunately, that was the case for US Air Force captain Erick Straub, who proposed to Cardinals cheerleader Claire Thornton during the first half of the Washington-Arizona game on Sunday. Considering she’s showing off the ring in the above photo, –and by the evidence from this video — I assume she said “yes.” 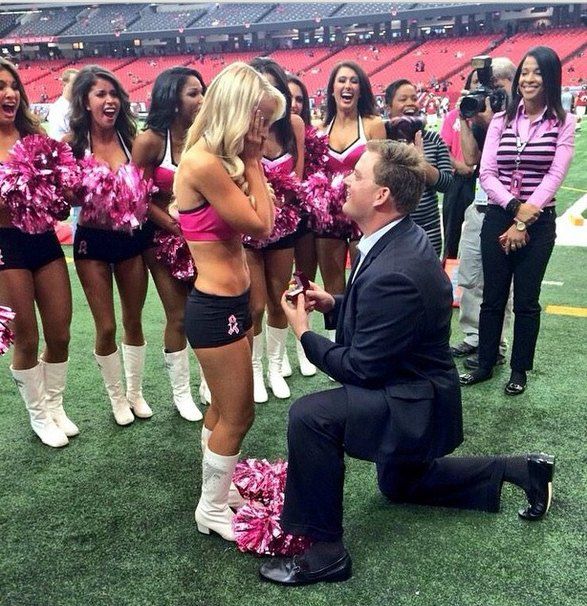 So, a hearty Mazel Tov to all the affected parties. May your happiness continue to grow even when all the recording cameras are switched off.

She just didn’t think it would be while she was at work.

It was the feel-good moment at Skilled Park at the weekend as Ms Moulds, a member of the Gold Coast Titans cheerleading squad, was stunned by Mr Rigney, who crept on to the field and popped the question in front of 15,786 people.

Ms Moulds, 23, said she had no idea about her partner’s elaborate plan, which he had spent months preparing.

“I didn’t think it would be so public,” she said.

“He told me he had something special planned. We were still in the middle of our (dance) routine.”

Mr Rigney, 24, said his girlfriend’s initial response had him worried that she was going to say no.

“When I was just sort of thinking of memorable ways to tell her, I thought there was a bit of an opportunity there with her being a cheerleader for the Titans,” he said.

“She said yes obviously, so it worked.

“It’s still all a bit of a blur still at the moment.”

The carpenter said he had played for the Bilambil Jets reserves in their semi-final win earlier in the day before backing up to propose to Hayley.

“It was a pretty stressful day,” he said.

Ms Moulds said she met Mr Rigney while socialising with mutual friends and said that they were likely to get married some time in 2014.

The dental nurse and Griffith University nursing student said one location she envisaged her partner proposing was on a balloon, but said she thought it was unlikely since one of Mr Rigney’s friends recently proposed the same way.

“I always thought it would be on a hot air balloon,” she said.

However, Ms Moulds said what made her husband-to-be’s proposal so special was that her family and friends were there to witness the occasion. 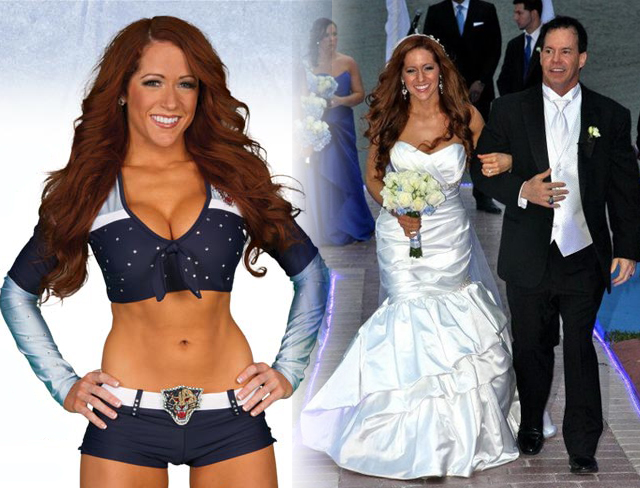 You can also watch the video that got her cast for the show:

Colts Cheerleader Hannah lists her “guilty pleasure” on the Colts website as “Wedding TV shows.” Well Hannah, remove the “guilty” from that pleasure, because now they qualify as “research”! Last night at the Colts final pre-season game against the Bengals at Lucas Oil Stadium, Hannah’s boyfriend proposed on the field during the first half. From Hannah’s positive “reception,” it seems her boyfriend’s proposal was successfully “completed” near the goal line!

During the end zone routine between the first and second quarter, stadium video screens showed a young man holding a “I (heart) the Colts Cheerleaders” sign. Despite a “fumble” by the PA announcer who said to stop the music right after the song started, the routine continued until he inserted the properly timed, “Stop the music!” towards the end of the routine (it’s “pre-season” for the announcers, too, I suppose). Hannah’s boyfriend walked onto the field, and the other side of his sign read, “Hannah Will You Marry Me?” and he knelt on the field to propose to a shocked but joyous Hannah.

But NFL game day schedules stop for no man, and soon the happy couple had to leave the field to complete their big happy hugs. Then, Hannah and her Colts Cheerleader sisters hugged, along with hugs for coach Theresa Pottratz, and after the newly betrothed left the field for a bit, soon Hannah was back on the field wiping a few tears while sharing laughs with her linemates.

Best wishes to the happy couple! And FYI, from my thorough analysis of TV’s “Four Weddings,” if you decide to have an outdoor wedding, make sure to check to see if the site is too close to airplane flight paths or trains, and be sure to have a photo booth. Always a photo booth…

END_OF_DOCUMENT_TOKEN_TO_BE_REPLACED

Good news all around!

If you were a frequent visitor to the Dallas Cowboys Cheerleaders website during the 2010-11 NFL season, you probably read all of Brooke Sorenson’s blogs about her upcoming wedding. Well, Brooke married her Prince Charming Laynce Nix (an outfielder for the Phillies) last November. The two got hitched in Bahamas and the wedding party included a whole gang of current and former Dallas Cowboys Cheerleaders: Stephanie Heymann, Kandi Harris, Kelsi Reich, Jordan Chanley, Tobie Percival, Tia Williams, Michelle Keys, and Crystal and Trisha Trevino.

The wedding photographer has posted a few photos from Brooke’s big day on her website. Click here to check it out! 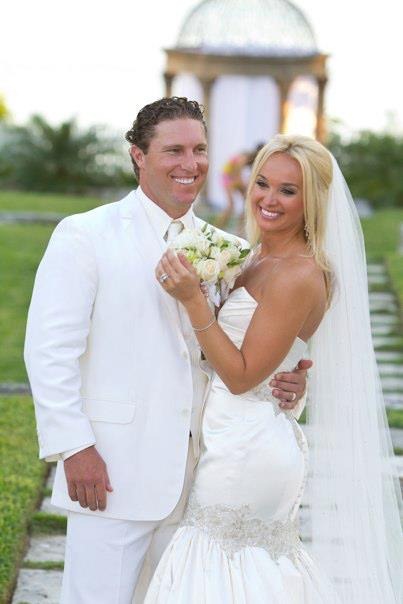 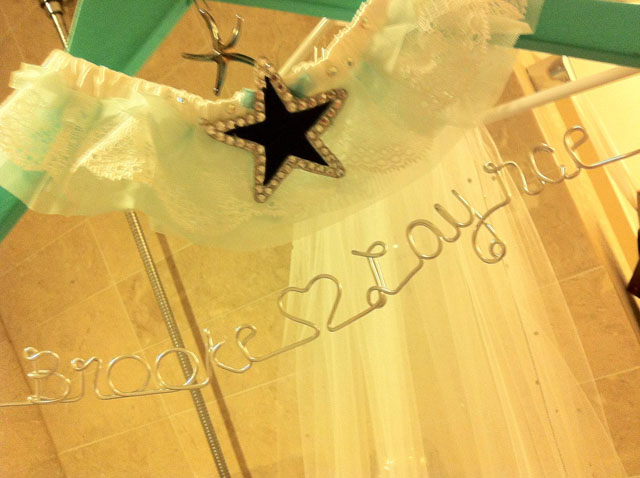 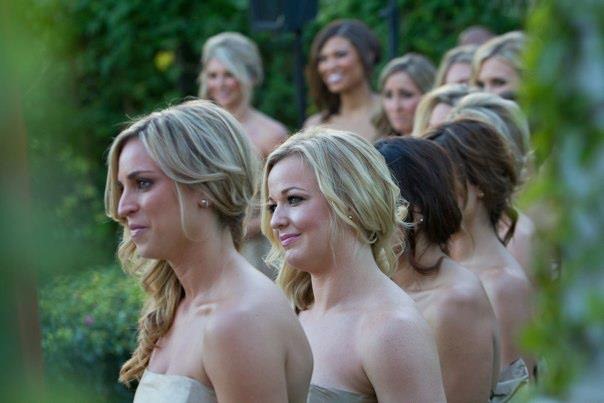 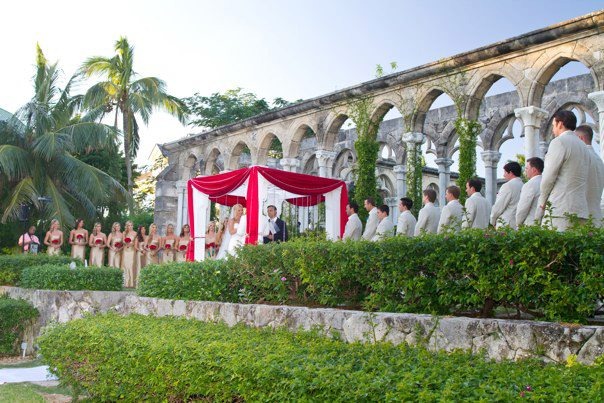 Kortney Yarbrough is getting married. I discovered this over the holiday weekend when I scrolled through my DVR list and came across a couple of forgotten episodes of TLC’s “Brides of Beverly Hills.”

First, I want to make it clear straight away that I do NOT watch this show. I love costumes and fancy dresses, and I will admit to watching every episode (and numerous repeats) of “Say Yes to the Dress.” But “Brides of Beverly Hills” isn’t my cup of tea. I set up a season pass for it, and I watched the first couple of episodes, but couldn’t take anymore after that. The show’s star, Renee Strauss, owner of Renee Strauss for the Bride in Beverly Hills is both two-faced (for talking smack about her clientele behind their backs) and a moron (for doing it on camera), and her friend Kevin Lee (an obvious alum of the Bobby Trendy School of Trying Way Too Hard) makes me cringe. Literally. Every time he says the word “FAB-uh-luss!” my shoulders go up, my back hunches over, and my face gets all scrunchy. He is SUCH a tool. And if this show lasts past this season, I will be very surprised. (Especially due to Renee Strauss’ recent financial issues, but you ain’t heard about that from me.)

Anywho, I was about to delete the show when the episode synopsis caught my eye. “Episode: 12 – Kourtney/Mariflor. A former professional football cheerleader comes in to Renee’s salon with her mom and friends in search of the perfect wedding dress.” I had no idea who this “former cheerleader” might be, so yeah, I sat down and watched it. I took one for the team.

I immediately recognized Kortney. How could I not? She’s a total knockout without even trying. Kortney, a cool chick, by all accounts, is an alum of the Long Beach Breaker Girls, Chivas USA ChivaGirls, San Diego Charger Girls, and AVP Dancers (in that order). I don’t know her directly, but I’ve got one degree of separation through several different people. 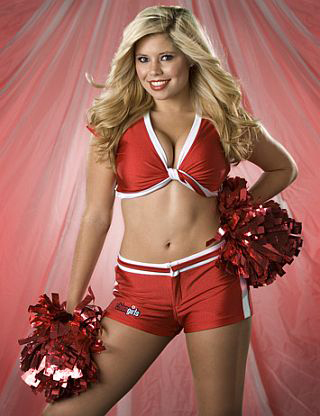 Kortney was a ChivaGirl for 2 seasons 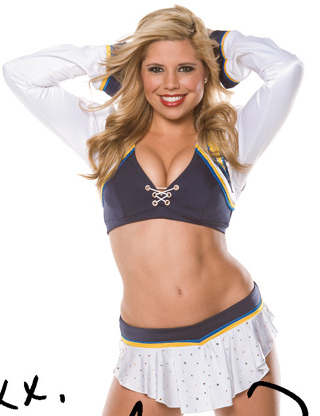 Kortney was a Charger Girl for 1 season 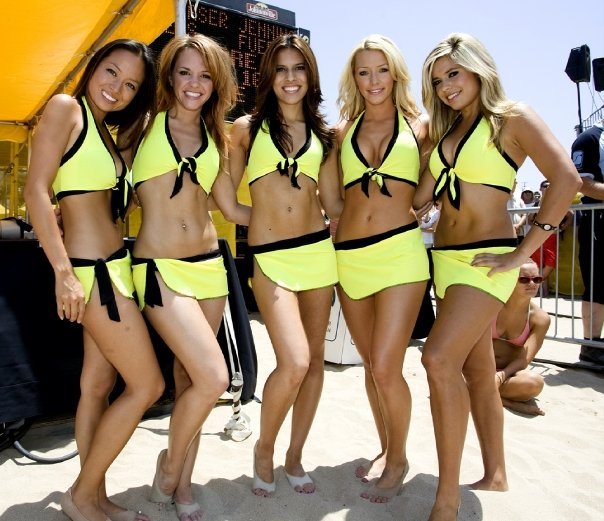 Kortney was an AVP Dancer for 1 season

Depending on when the show was taped, Kortney is either engaged, or already married, to a pro surfer. This guy, whose name I can’t find anywhere: 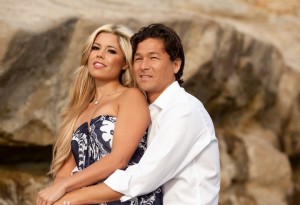 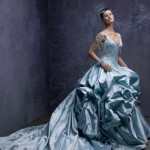 Let me just say that I don’t blame Kortney for being on this awful show. This is the first season. She couldn’t have known. In any case, she found her way someway, somehow, to Renee Strauss’ bridal salon, mother and best friend in tow, and she tried on a few gowns, including the blue St. Pucchi creation in the clip below.

It’s a unique dress. It’s an expensive dress ($17,000!!) And I really hope Kortney didn’t buy it. I really hope she took her hard earned money and spent it somewhere else, but I’ll never know. (To date, I still haven’t made it all the way through an episode of this show.)

In any case, best of luck-slash-congratulations to Kortney and her fiancee. I’m sure either was, or will be, a beautiful bride, no matter what dress she chose.