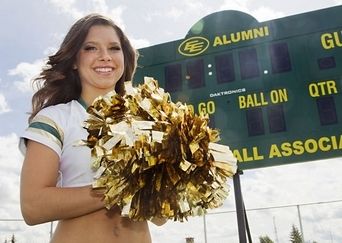 When a Canadian Football League team is undefeated in the rankings, you pretty much have to notice the cheerleaders, right? For one St. Albert resident, having landed a spot on the Edmonton Eskimos cheer squad as a flyer is a dream come true.

Yes, Riley Myck, 18, is the petite brunette on top of the pyramid. She’s the flyer that gets tossed from base to base. She’s the stunter that performs the scorpion standing with one foot on the muscular shoulders of her base. With the grace of a dancer, she grabs the loose foot and bends that leg upward behind her body until it touches the back of her head. Admiration mingled with a collective “ouch” at our own inability sweeps through the crowd.

“I love the adrenalin rush. It’s so empowering. It’s just me up there. I am in control of what I can do and, when I’m up there, it’s just me,” says Myck.

The Bellerose Composite High School grad is part of a mixed cheer squad of 18 dancers and 24 stunters. Coach Dianne Greenough explains that, this year, most of the auditioned cheerleaders are new to the squad, as is Myck. In their selection, Greenough looked at a wide range of elements from talent, experience and personality to their gymnastic abilities and daredevil spirit.

Of Myck, Greenough says, “She’s a natural gymnast and she’s a really hard worker. Her gymnastics abilities, her self-confidence and her maturity are huge. She’s very focused and she soaks up all new information and skills.”

The ability to juggle a school or work schedule, practices, 10 home games and about 200 promotional activities is crucial to a cheerleader’s volunteer role. So far this season, Myck has cheered at Edmonton Rush lacrosse games, the Edmonton Indy and various charity runs for diabetes and multiple sclerosis.

One event that had a lot of impact on Myck was the Capital Ex Monday Morning Magic. It is a program designed to assist handicapped children enjoy the fun of the fair in a safe environment. “They were so full of energy and excitement.”

Born in Drayton Valley, Myck has lived in various parts of the country, including Beaverlodge and St. John’s, N.L., before moving to St. Albert five years ago.

While attending Grade 7 at St. Peter’s Junior High in St. John’s, Myck was introduced to cheerleading. “I’m a bubbly, happy person full of energy and it suited me. It’s hard. I love the challenge and there’s always something new.”

After moving to St. Albert, she enrolled at W.D. Cuts Junior High and joined the competitive cheer team. Her decision to attend Bellerose was again highly motivated by the cheer group. And it paid off. Last year, the physically fit grad was captain of the Bulldogs cheerleading team.

This week, the stunt team gets to strut their stuff at the United States National Stunt Camp and Competition.

“I want to show people I can do things by myself. I’m an independent girl and I’ve worked my butt off. Being with the Edmonton Esks is my paradise and I’m enjoying my reward,” Myck said.