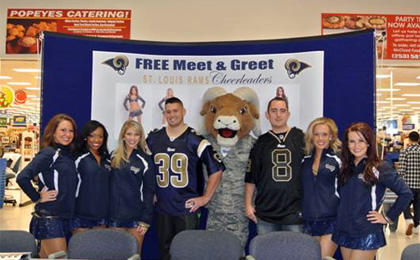 Recently, five St. Louis Rams cheerleaders and team mascot Rampage traveled to the Joint Base Lewis-McChord (JBML) in Washington to bring some holiday joy to the men and women serving our country and working together to keep JBML as one of the most successful joint bases. Jessica, Jennifer, Emily S., Shannon and Jayne adventured to the base for a weekend full of events and once in a lifetime experiences.

The first stop of their visit was the fire station on base. The ladies saw the new ladder truck that the JBLM Fire Station put into service that very day. They received an inside look at the procedures and protocols for the fire fighters. Not only were they given a tour of the station, there were also able to ride in the truck, as well as the ladder bucket, up to its full 100 foot height.

For Jessica, this was one of the highlights of the trip. “As an emergency room nurse, I was honored to visit the fire station on the base and get an up close and personnel look at what pre-hospital care is all about,” she said.

Next, the group went to the McChord Main Store to sign autographs and take photos with fans. Rampage also provided lots of entertainment to the younger Rams fans on base. Rampage was the first NFL mascot to come to the Main Store to visit with soldiers and their families.

“I was also truly honored to meet the people who have sacrificed their lives to protect us, our soldiers,” said Jessica about spending time in the Main Store. “Those men and women are truly inspirational, and I am honored to have met them.”

During the meet and greet, two of the biggest Rams fans on base came out dressed from head to toe in Rams gear. They were rewarded with tickets to the Monday Night Football game in Seattle, as well as pregame field passes.

“One of my favorite moments of our trip was giving two soldiers tickets to the Rams vs. Seahawks game during one of our appearances,” Shannon said. “They were so excited to spend some time off base and cheer on the Rams at the Monday Night Football game!”

The next day, the ladies were able to experience shooting training on a gun simulator the way soldiers qualify with the M16. They got some pointers from the professionals before trying it out themselves. “We were able to get a sneak peak of the day in the life of a training soldier, and I can say that it was an eye opener for me,” said Jessica. “While visiting the gun simulation, I actually surprised myself and found that I can actually shoot an M-16. I hit not one, but several targets! I had a great experience.”

After shooting practice, they visited the unit that maintains and repairs the Howitzer gun. They were treated to a demonstration on how to load and aim the cannon-like gun and were then given the chance to try it out themselves.

After the weekend, each member of the Rams organization walked away with a memorable experience. “It is always such an honor to meet the men and women who serve in our military and personally thank them for everything they do, especially during the holidays,” said Shannon. “Visiting Joint Base Lewis-McChord allowed us to meet several military personnel. We were not only able to show our appreciation for them, but we had the chance to really get to know everyone we talked to.”