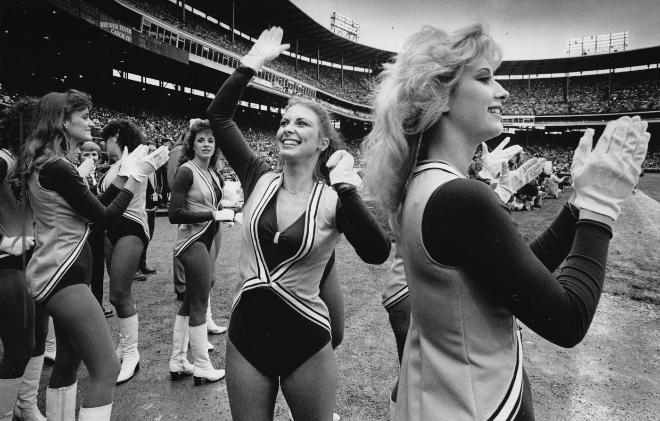 Green Bay — It has been almost 30 years since the Green Bay Packers outfitted an official cheerleading squad in contemporary attire and had its members support the team in games at Lambeau Field and Milwaukee County Stadium.

The Packers got out of the cheerleading business in January 1987 and have no intentions of getting back in.

Instead, management will continue the practice of using a total of 15 to 20 cheerleaders from nearby St. Norbert College and the University of Wisconsin-Green Bay that has been in effect since the mid-1990s.

“Most of us feel the college cheerleaders fit with the image we want to project,” Packers President Mark Murphy said Friday. “It’s wholesome. I hear mostly good things about our cheerleaders from fans. I think they find it kind of quaint, to be honest.”

The collegiate cheerleaders dress in modest uniforms supplied by the Packers.

Green Bay is one of six franchises in the National Football League without an official squad. The cheerleading units for the other 26 teams often have been described as eye candy on the sidelines.

The Packers tried that to a degree in the early-to-mid 1980s after their Green Bay Sideliners were given more provocative garb, including go-go boots and short shorts.

“They were attractive,” said Bob Harlan, the club’s president before his retirement in 2007. “We dressed them not daringly, but they were fancier than the college cheerleaders, obviously. We did change their outfits as the seasons went along.

“We didn’t think we could compete with the Cowboys, but we thought we wanted to at least try to add some atmosphere. Our fans let us know they didn’t want us to be parading girls out there looking like the Dallas cheerleaders. And that was never our intention.”

It’s possible, according to Harlan, that the Packers still could have an official squad were it not for the internal bickering that led to disbandment of the Sideliners after the 1986 season.

“It might have been the type of program we might have kept in existence and maybe turned over to our marketing department,” Harlan said.

Shirley Van, the cheerleading director who ran a dance studio in Green Bay, and many team members came to be at each other’s throats.

“The relationship was getting worse by the day,” Harlan said. “It just was not worth keeping. So we finally just shut it down.”

At the same time, the front office deep-sixed the career of Packy Packer, who had a brief stint as the club’s official mascot.

In January 1989, Harlan and staffers met with three groups seeking approval to resurrect a cheerleading team. The Packers told them no, and it became a dead issue after that.

In an informal locker-room poll Friday, four players favored the status quo while three preferred a return to official cheerleaders.

“I think our fans are unique in that they don’t need a big circus atmosphere,” said tight end Ryan Taylor. “Because they’re football purists and enjoy the game as is.

“I don’t know that it would add anything. There are other teams that want to put on more of a show, I suppose, because they’re worried about selling tickets. There’s another team in our division that feels it has to put on a show.”

Taylor had to be referring to Minnesota because Chicago and Detroit don’t have cheerleaders.

“I thought those were our pro cheerleaders, I really did,” Jones said. “When I’m out there I’m not really engaged with the cheerleaders. But I saw tradition and love the way the whole atmosphere is.”

On the other hand, some players think professional cheerleading would play well at Lambeau Field.

“I would definitely like to see it go down to five with Green Bay adding a team, yes,” said quarterback Aaron Rodgers. “I think it’d be great.

“Take the last home game, for example. They showed a couple cheese bikini-clad women in the stands and the fans went nuts. The ‘Bikini Girls’ in general, I don’t know if they’ve shown pictures of them yet on the Jumbotron, but they’re a big hit.

Defensive end B.J. Raji said he was “shocked” upon arrival in 2009 to find out the Packers had no official cheerleading squad, something he regards as “synonymous with the game of football.”

Raji and tight end Andrew Quarless said a more sleek approach to cheerleading would only enhance the experience for fans.

“First of all, it would give some females job opportunities in the area,” said Quarless. “I think it would make it feel more NFL-like.

“Not to say that they don’t do a great job. They do, and they do it for nothing.”

The Packers began using cheerleaders from city high schools as early as 1931. Under Vince Lombardi, the Packers started their first official squad in the late 1950s, and the name went from Packerettes to Golden Girls, and then back to Packerettes.

Meanwhile, the Cowboys and general manager Tex Schramm debuted their cheerleaders in 1972. It brought sex appeal and jazz dancing to the sidelines, and shortly thereafter many teams began to follow suit.

Today, 10 of the 26 teams with cheerleaders have names for their squads, from “Jills” in Buffalo to “Saintsations” in New Orleans and “Sea Gals” in Seattle.

Murphy indicated that some teams benefit significantly from the allure of their cheerleaders by increased page hits on their web sites to sales of swimsuit and even lingerie calendars.

“Not to be critical of anybody,” said Murphy, “but you look at what some of the other teams do with their cheerleaders and I just don’t think we’d feel comfortable doing some of those things.

“I have heard complaints about our cheerleaders: ‘What do they bring? Why don’t we get modern cheerleaders? Look at all the other teams and how they use them.’

“But more (fans) say this really fits in our image in Green Bay and what we want to portray.”

Five NFL teams besides the Green Bay Packers have no official cheerleading squads. All six teams are in cold-weather locations. The only dome team is Detroit. Cleveland, which joined the NFL in 1950, is the least tenured of the franchises.

CHICAGO: The Bears have no cheerleaders. In the late 1970s to early 1980s, they had a unit called the “Honey Bears.”

CLEVELAND: The Browns have no cheerleaders and new owner Jimmy Haslam is against ever having them. Owner Art Modell experimented with cheerleaders way back, but the cavernous size of old Cleveland Stadium and the extreme cold ended that.

“We had them one year,” Pat Modell, his wife, once said. “They looked crazy. It was ridiculous.”

In recent years the Browns tried high school cheerleaders but the practice was discontinued by Haslam.

DETROIT: The Lions had a traditional squad at Tiger Stadium in the 1960s, and then used different high school troupes during its stay at the Pontiac Silverdome from 1975-2001. They have had no cheerleaders at Ford Field.

NEW YORK GIANTS: Other than a brief trial in the early 1960s, the Giants haven’t had cheerleaders.

“Philosophically, we have always had issues with sending scantily clad women out on the field to entertain our fans,” Giants co-owner John Mara told the New York Times in 2010.

He added: “Some teams are comfortable with not only having cheerleaders but selling cheerleader swimsuit calendars or, in a couple cases, lingerie calendars. It’s not something you’re going to see the Giants do. Not while I’m around, anyway.”

PITTSBURGH: Other than a four- or five-year period in the late 1950s when cheerleading squads from Robert Morris University appeared at games, the Steelers have not had cheerleaders.

2 Replies to “Skirting the cheerleader issue in Green Bay”