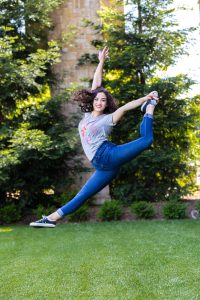 Many students play sports throughout their childhood and into high school, but a select few continue on to play their sport in college. From there, it’s only the best of the best that continue on professionally. It takes a certain kind of dedication and talent to enter the professional realm.

Erin Hardy, senior psychology major and dance minor, been given the opportunity to be a professional dancer. She will be dancing for the San Francisco 49ers Gold Rush cheer team for the 2016-2017 football season.

Hardy has been dancing her entire life. She started dance in kindergarten when it was an option to be in a ballet dance class instead of going to recess.

“I was pretty self motivated right from the beginning, but I also only wanted to take ballet and not branch out into any other style,” Hardy said.

Ballet became her passion and she continued to dance all throughout her childhood. Her mom encouraged her to try out for her high school dance team and she ended up being on the team for all four years. Hardy’s time in dance was not all glamour and fun.

“Before high school, I was dancing with a ballet company where I was bullied pretty bad. I was so conflicted because I hated the environment I was in but I loved ballet and performing,” said Hardy. “I did end up switching ballet schools, but I feel like if I hadn’t found my new school when I did I might have hit my breaking point and quit dance all together.”

She didn’t let the bullies win and she went on to continue dance throughout high school.

“My inspiration to continue has always come from trying to be the best possible role model I can be. Throughout the years, I wanted to set a good example for the younger girls on my team.” Hardy said. “Then, when people who had just seen me dance in shows would approach me and talk about how I inspired them to pursue dance and improve, I began to realize the impact I was having on others.”

Hardy knew she wanted to dance in college and joined the Sonoma State University Sapphires dance team her freshman year.

“Erin is a beautiful dancer, she is very passionate about dance and really cares about the overall success of the team. She is extremely friendly and just an overall genuine person,” said Erica Pecho, captain of the Sapphires.

Hardy was able to broaden her dance styles and gain confidence on the stage.

“Being on the Sapphires and being surrounded by dancers so talented and versatile has definitely helped me improve my own dance and performance skills,” Hardy said. “One style I really struggled with coming into college was hip hop, and three years ago I would have never thought I would be able to call myself a hip hop national champion.” The Sapphires won the Grand Hip-Hop Championship title for division II and III at their national competition.

Hardy decided she wanted to audition for the Goldrush team two years ago and she made it all the way to the final round. She was offered a position for a pre-game rally event at Great America, but not a spot on the team. “It was great experience and gave me a better idea of what I would be doing if I made the Goldrush,” Hardy said.

When the time came to audition this year, she was ready.

“Pro dance is always something I had in the back of my mind and I felt like the 49ers had the platform I was looking for,” Hardy said.

“I was really excited for Erin when I found out that she made the 49er cheerleaders. This was something she had wanted for a really long time, so I’m happy that she made the team. It’s great that all her work has paid off,” Teammate Lena Stephens said. “Not only that, it’s great that someone is representing Sonoma State and the Sapphires through this wonderful opportunity.”

Hardy is extremely grateful for the opportunity to dance professionally. “It is something I worked very hard to achieve. I hope by being on this team I can inspire young girls who have been bullied or who have low self-esteem. I want to prove to them that it is possible to accomplish a dream as long as you persevere and do not allow your insecurities to stand in your way,” Hardy said.