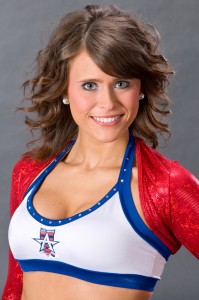 Our friend Kristin is an Alum of the Allen Americans Ice Angels. In her everyday life, Kristin is a Technical Recruiter out of Plano, Texas. She’s currently in the finals for a Reality Show called “Top Recruiter,” and your votes can help her move on to the next round of competition.

This link takes you to a page where you can watch Kristin’s video. Cast your vote for her by clicking on the thumb’s up button that appears under the row of yellow stars. If you REALLY want to help, post some positive comments at the bottom of the page.

It only takes a second, so click here and show her some love!

I’m voting for her because she has a degree in Math and Economics. I am awed by this. Personally, I found the study of calculus to be an profoundly damaging experience. I still carry emotional scars from that semester. In fact, I think I’ll go lie down for a while.

The Americans have updated their website with a new team photo of the Ice Angels and bios for each dancer. 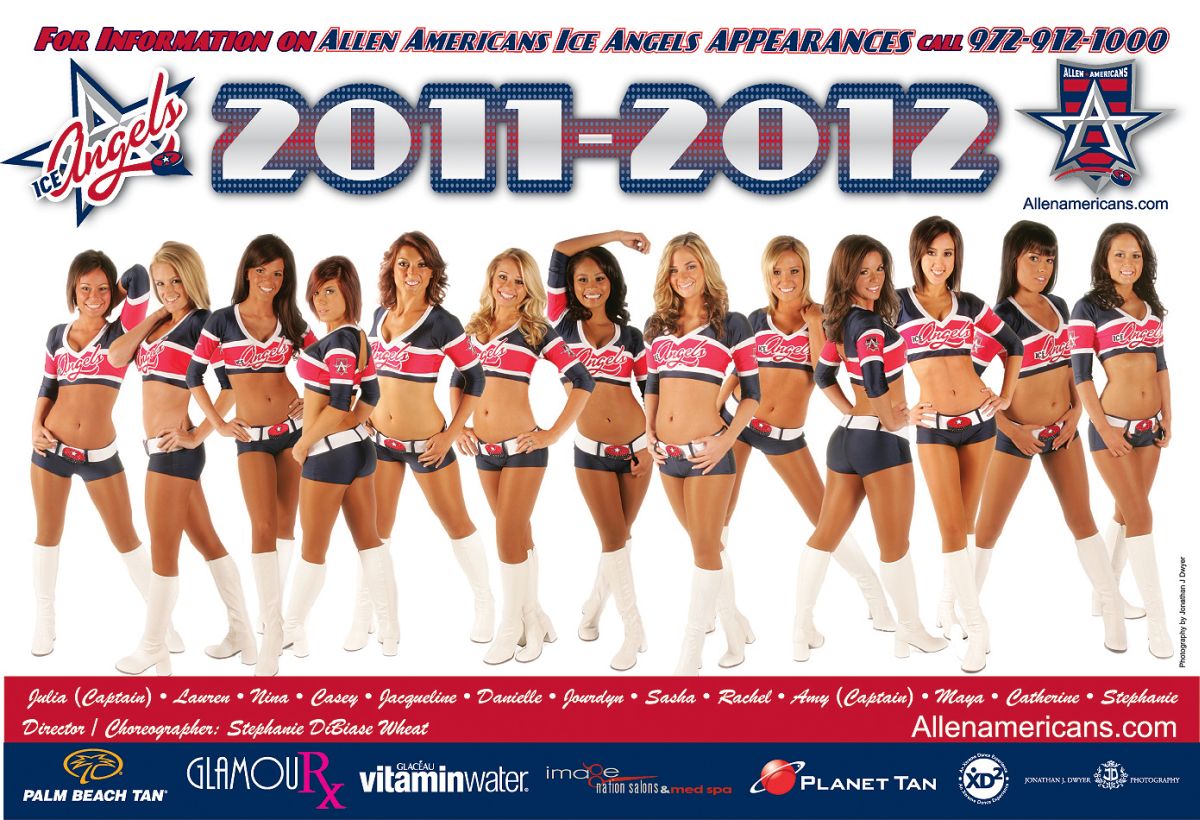 The 2011-2012 CHL Allen Americans Ice Angels Dance Team held their auditions this past Saturday at the Allen Event Center. In the end thirteen beautiful young women were selected for the squad. 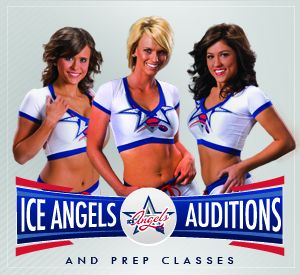 Prep Classes are to be held on Friday’s starting July 22, 29, August 5 and 12 from 6:30-7:30 p.m. at XD2 Dance Studio located at 1802 Pleasant Valley St. 300 Garland, TX 75040. Each prep class will cost $15 (cash only) . Prep classes will give you the edge and a step up in the audition process. Prep classes are taught by Ice Angels Director Stephanie Di Biase-Wheat and will help you experience the hip-hop style of dancing that will be done throughout the season. “I look forward to sharing my experiences and expertise that I received as a dancer and choreographer for the Dallas Mavericks and Dallas Desperados”, Di Biase stated. Dancers will have the opportunity to participate in a “mock” audition, receive feedback after performances and much more.

The Allen Americans Ice Angels are looking for 16 beautiful, talented and fit ladies who love to perform in front of thousands. These 16 ladies will be apart of an exceptional dance team crowned Best-of-the-Best in the Central Hockey League during the 2010-2011 season. You will be competing against other girls for the opportunity to perform at 30+ games, take part in community events, meet great friends and above all be an Allen Americans Ice Angel. First round of Auditions will take place Saturday, August 13 at 9:30 AM at XD2 Dance. A $25 Cash application fee along with the 2011-2012 Allen Americans Ice Angels Application (CLICK HERE TO DOWNLOAD) and a picture of yourself is due the morning of tryouts. Semi-Finals will be held Wednesday, August 17th at 7:30-10:00 p.m. at XD2 Dance. Finals will be held Saturday, August 27 at the Allen Event Center 6:00-9:00 p.m.

All audition participants must be 18 years or older prior to August 1, 2011. Dance shorts with half top or tank top along with a pair of tennis shoes are required for both prep class and auditions. 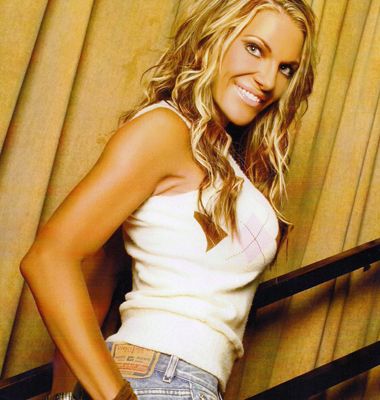 DiBiase-Wheat, comes to the Americans with an impressive resume, including stints with both the Dallas Mavericks, 2000-2002, where she was Team Captain. And the Dallas Desperados, 2003-2004 as a choreographer/dancer. She has also made appearances on “Live with Regis and Kelly, Good Day Dallas, and Fox Sports Net.

“After dancing and choreographing for different sports organizations, it feels great to have a team of my own, said DiBiase Wheat. I look forward to sharing my experiences and expertise that I received as a dancer and choreographer for the Dallas Mavericks, and Dallas Desperados”. “To be a part of the Americans organization and The Ice Angels is extremely exciting for me. Let the fun and entertainment begin”.

“We feel with the experience that Stephanie brings to our organization, the Ice Angels will
continue the success that has been started here. We are excited to have her join our
organization and look forward to the upcoming season and to repeat as the Best Dance Team in the CHL.” Added Matt Canavan, Americans team President.

The Ice Angels were founded by BreAnna Foddrill in 2009 and have been an integral part of the Americans organization. The Allen Americans Ice Angels are actively involved in the Collin County and surrounding communities civic and nonprofit organizations.

(Last week I posted this with the wrong – last year’s results. Sorry for the confusion)

The results are in for the CHL’s 2010-11 Best of Poll. And congratulations are in order for the Allen American Ice Angels who were voted the league’s Best Cheerleaders/Dance Team! 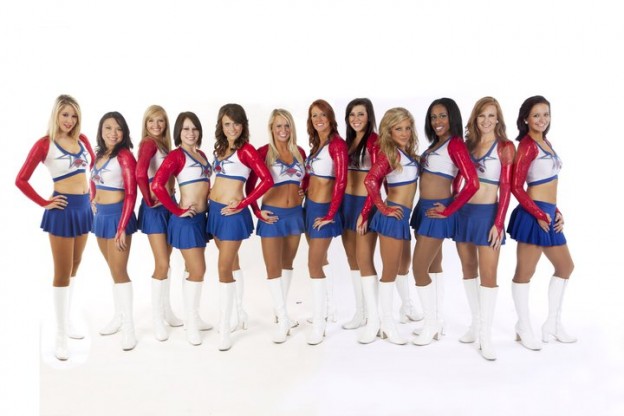 The Ice Angels are the dance team for the CHL Allen (TX) Americans. And the just released their first swimsuit calendar. Here’s a look at the front and back covers: 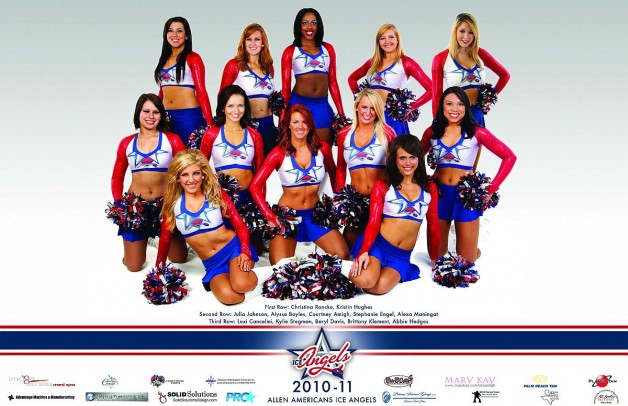 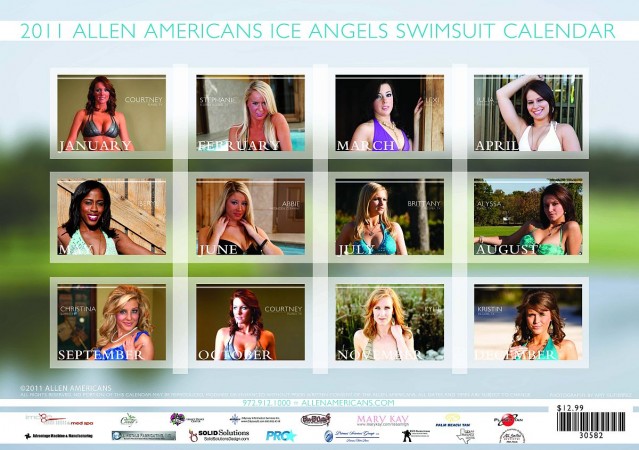 ALLEN, Texas – The Allen Americans Ice Angels are excited to announce that audition prep classes will be held every Wednesday from 7-9 p.m. beginning July 7 at Legacy Dance Center in Frisco. There will be six classes total on the following dates: July 7, July 14, July 21, July 28, Aug. 4 and Aug. 11.

The sessions offer a glimpse of how professional dance team practices are conducted, as well as give participants an upper edge for tryouts. Ice Angels Director BreAnna Foddrill, a veteran of the Dallas Desperados Dancers, will be at each of the classes.

Last year, nine out of the 12 women that made up the squad attended prep classes. The Ice Angels’ dance style is advanced hip-hop, and prep classes cost $15 each. Ages 15 and up are welcome to attend, but participants must be 18 years old to audition for the squad. Attendees should wear dance pants or shorts with a half top or tank top. Legacy Dance Center is located is at 4040 Legacy Drive, Frisco, TX 75034.

Last season, the first-year Ice Angels were runners-up in the dance team category in the CHL’s Best of the Best poll. Also, four squad members made the 2010 MLN MAJOR ATTITUDE Dance Team in MLN Sports Zone’s annual issue that recognizes the top 20 minor league dancers and cheerleaders. The Ice Angels had more members selected than any other club.

Every year, the Central Hockey League sends out ballots to players, coaches and broadcasters looking for the best of the best, on and off the ice.

The winners in the category of “Best Cheerleaders/Dance Team” are the Colorado Eagles Chicks Dance Team!

And in third place were the Rapid City Rushettes.

Congratulations to all the squads and dancers!