There are loads of game day photos of the ROAR of the Jacksonville Jaguars up on the Jags website. All of their home games, from preseason up through last weekend are online.Click here to see the action on the field.

The Jacksonville Jaguars kicked off their home opener on September 20th with a 15th Anniversary Celebration. Former members of the ROAR of the Jaguars were invited to participate in a pre-game performance and presentation of retired Jaguars players during half time.

The Jaguars 15th Anniversary game on Sunday, September 20th, was a wonderful experience to be a part of.

Practices were so exhilarating, although we all wanted to spend more time catching up with old teammates to hear about their lives. But in the end we ended up with a remarkable performance that was choreographed by former ROAR member/current ROAR Manager, Christy Stechman Zynda.

Seeing all the women from past seasons made me so proud to be a part of something so exclusive. Dancing during the game with all the ROAR Alumni brought back all the wonderful feelings and memories from previous Jaguars games.

The best part of the Alumni performance was being able to dance alongside my sister Kena, my Director (of the Jacksonville Axe Maidens) Darlene Clancy, and some of the Professional Cheerleaders Alumni (PCA) members who choreographed dances for the Axe Maidens during our rugby season. I think cheering for the Jacksonville Axemen has been a huge factor in keeping me well prepared for the work involved at practices for the reunion game. It has allowed me to continue to perform in front of electrifying fans. It was incredible running into my Axe Maidens teammate Amy M., who was just as energized for me. I felt extremely good to know that my current teammates were so supportive, wishing me good luck on my future planned endeavors.

To be part of a performance with over 100 great women who danced for the ROAR over the past 15 years was an extraordinary event that I am sure provided everyone involved with memorable encounters. Knowing we all shared the same great experience, being part of an astounding organization as the “ROAR of the Jaguars”, is difficult to articulate into words how this reunion lifted my spirit. I wouldn’t have missed it for the world.

[Photos from the reunion game] 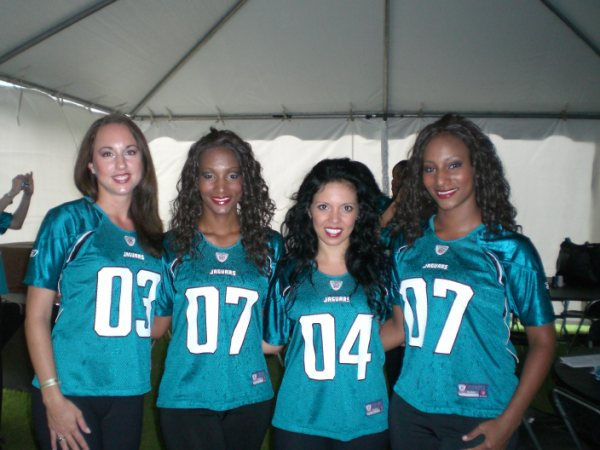 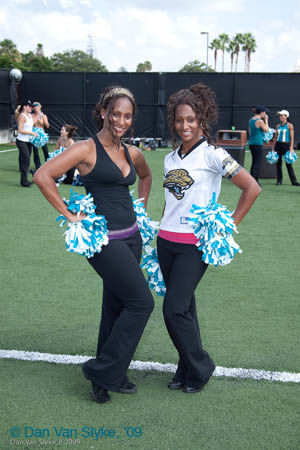 Kena at Keana at practice 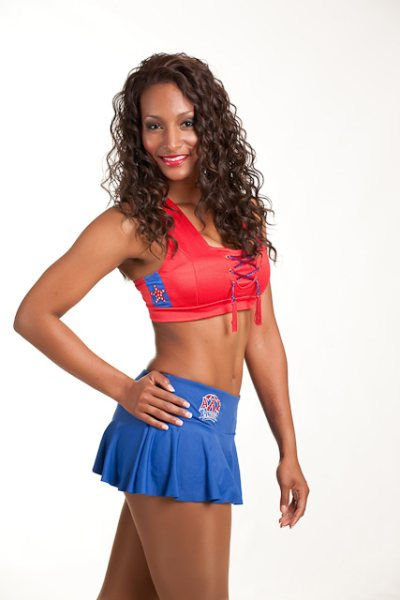 Keana in her Axe Maiden uniform 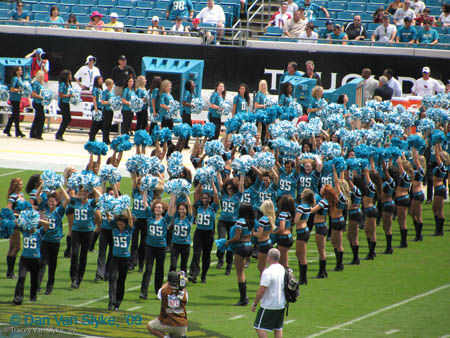 As in previous years, the NFL is supporting October as Breast Cancer Awareness month. The league promotes a number of different activities. You can read more about that here.

So over the weekend, teams across the league showed their pink, and their cheerleaders are part of it all. Click here to view the pink power on NFL.com. 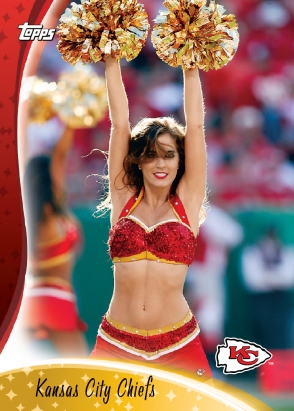 Topps trading card company has released their 2009 NFL trading cards. This year, they’ve decided to include special edition cheerleader cards in the set. Each card shows an action photo of a Chiefs, Dolphins, Jaguars, or Ravens cheerleader on the field. I have no idea what method was used to select the teams and cheerleaders for the cards. 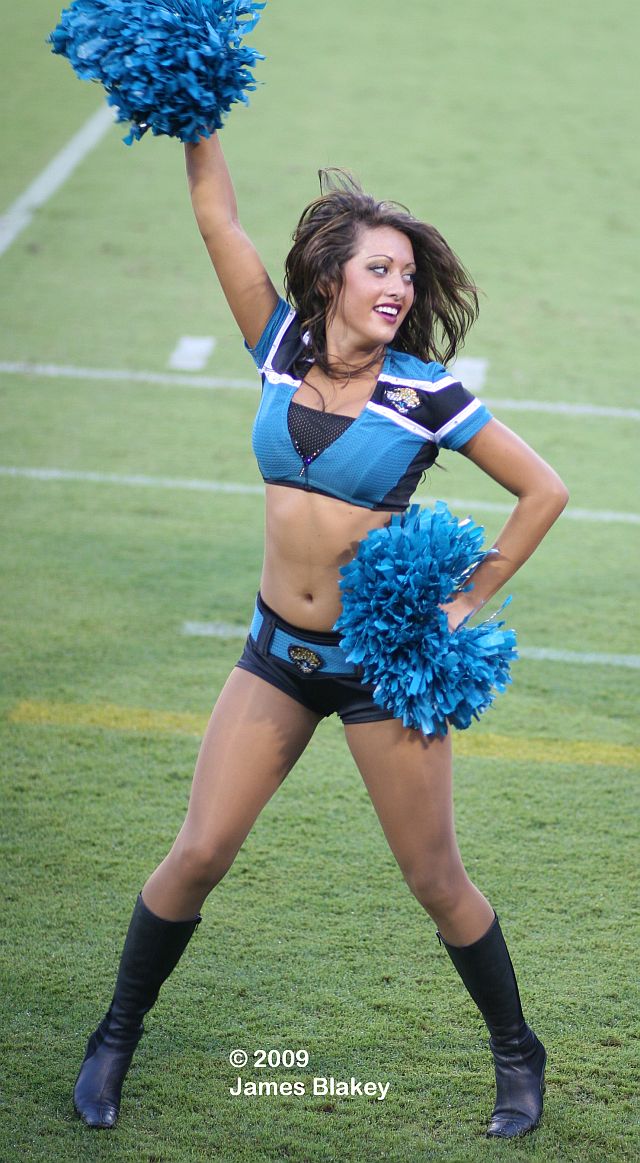 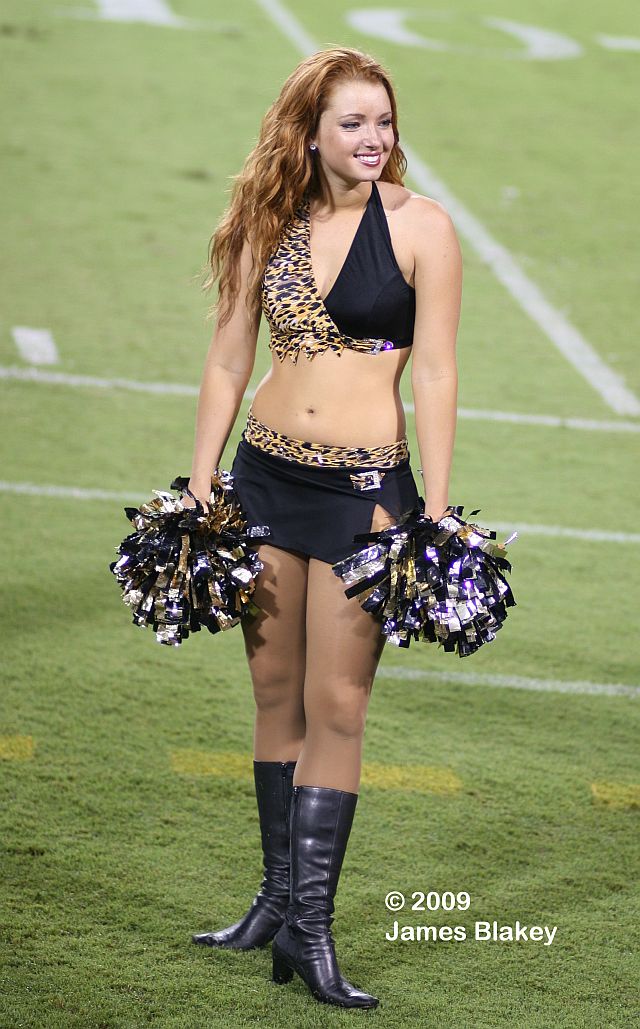 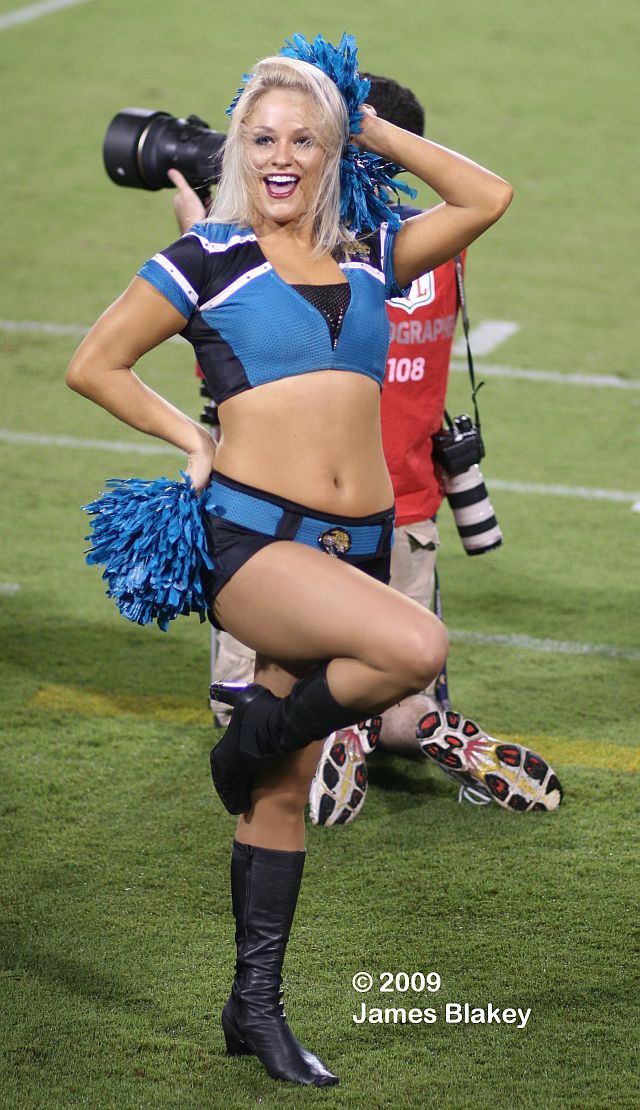 This is the end of the routine that The ROAR perform each time the Jaguars make a 1st down. 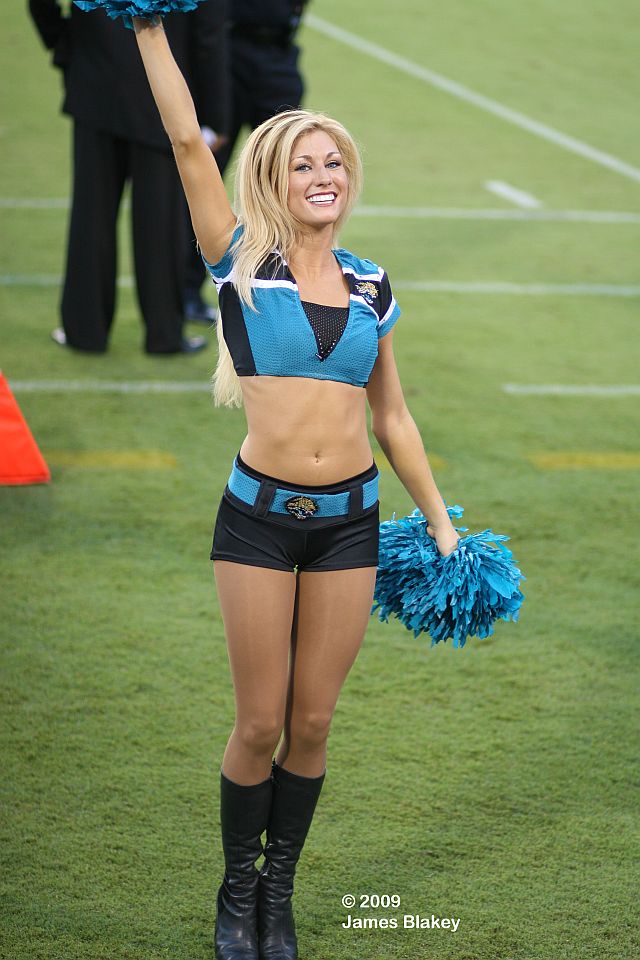 Amanda graduated with a degree specializing in business management from the University of North Florida. Off the field, her entrepreneurial dream of becoming her own boss has come to life through her thriving business. She was named Veteran of the Year for the 2008-2009 season. During the game on Saturday, the three year veteran was honored on the scoreboard and in the game program as The ROAR Member of the game.” 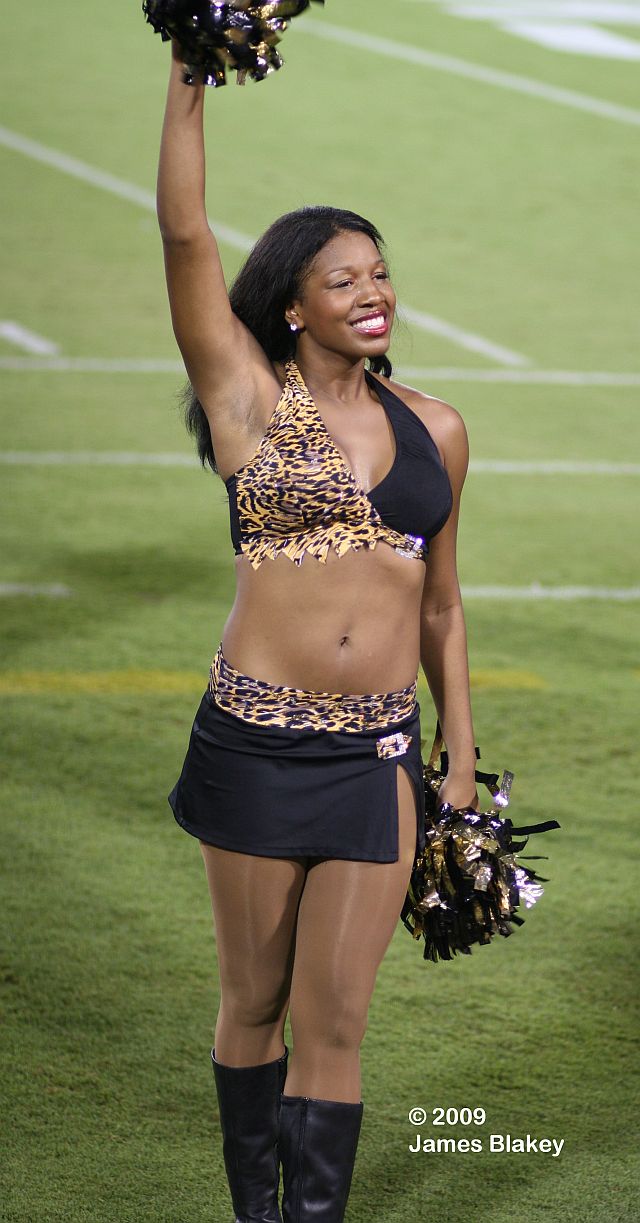 Laurie is a graduate student pursuing a master’s degree in health administration. Laurie was Miss River City USA 2009 and is the founder of PROJECT GIRL TALK- a teen advocacy program. After graduation she will be pursuing a career as a United States Navy Officer. This is Laurie’s 5th season with The ROAR.

Kristen is a graduate of Bethune-Cookman University with a B.A. in sociology. She is a graduate student pursing a MA in counseling and works as a counselor. This is her 5th season with The ROAR. 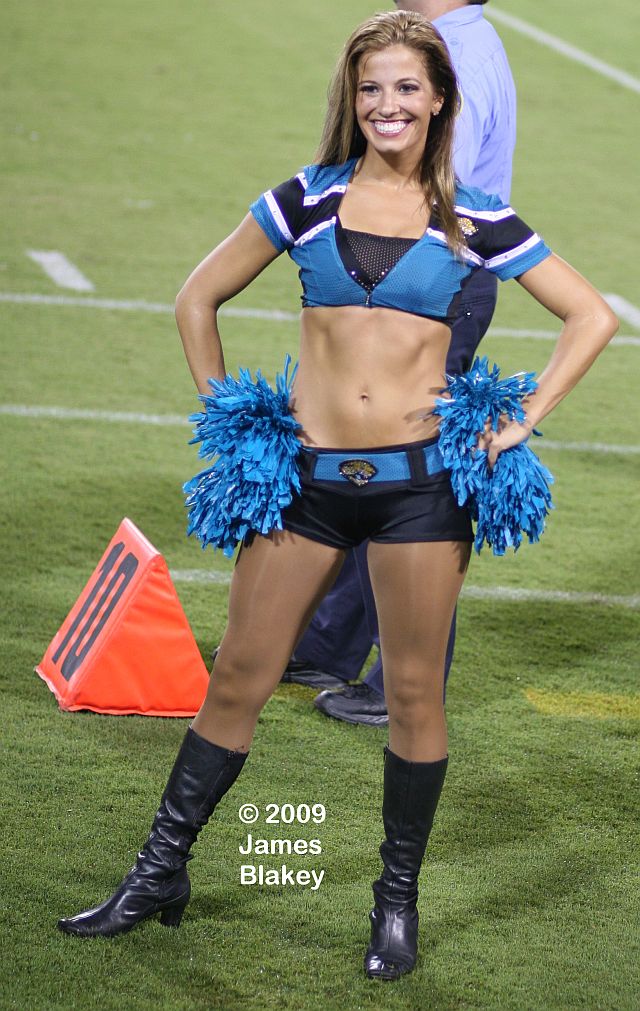 Kayla S. is a full time wife, mother and business owner. She is involved in several charitable organizations in the community helping children with special needs. She was named the Rookie of the Year for the 2008-2009 season. This is her second season with The ROAR.

[More photos from the game] 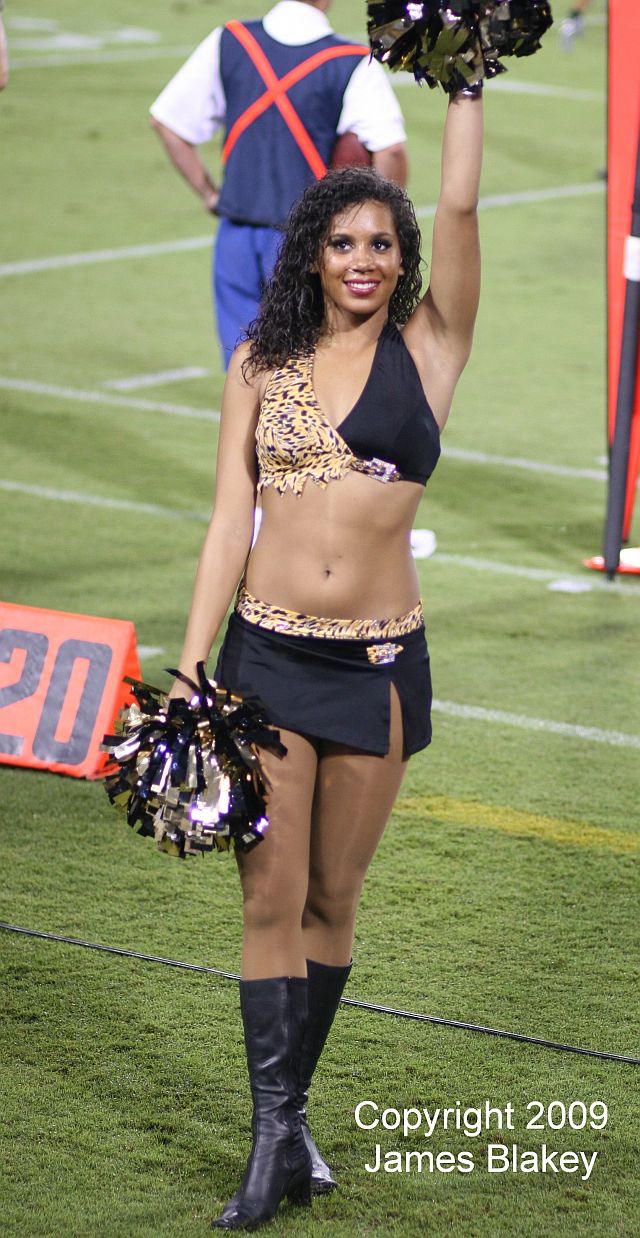 To me this is what I think of as the “Classic” ROAR uniform. 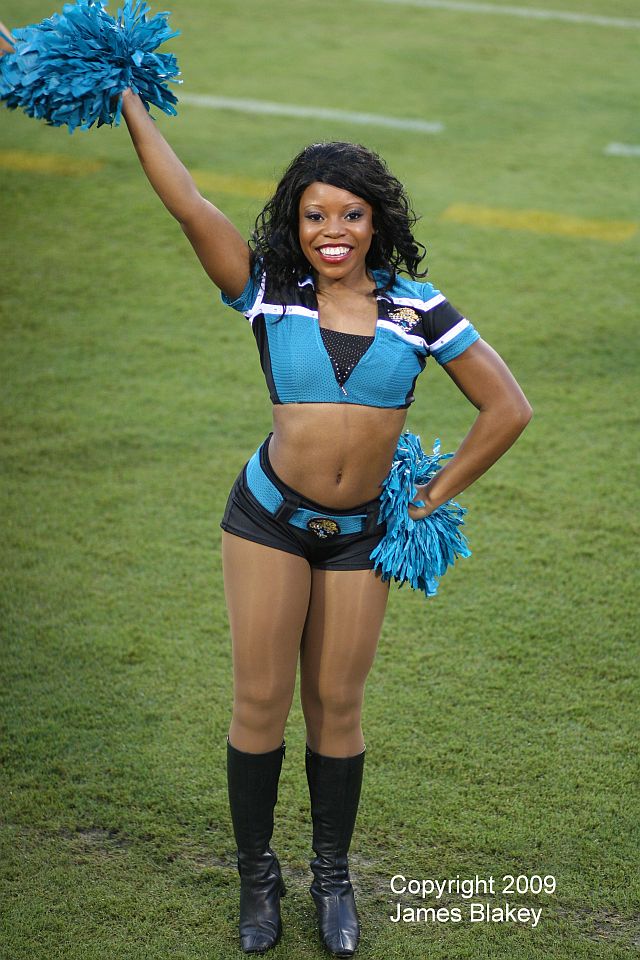 To me this is the “Modern” ROAR uniform. Of course, I could be entirely wrong. Perhaps Sasha or some other uniform expert will weigh in, and detail the history of the uniform.

Let us know if you like these kind of polls, and if so, do you have any suggestions? 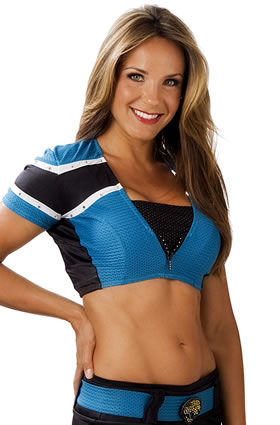 The ROAR of Jacksonville have posted bios and photos of their new squad.

Michelle is a four-year veteran member of The ROAR. She graduated from the University of Georgia with a B.S. in Ed./Sports Communications. She is nutrition product distributor. Michelle has 6 years of dance training and received a performing arts scholarship in college.

Murder Victim’s Older System Says ‘She Would Have Loved It’
From News4Jax.com:

Jessica Clifton was pre-teen girl when her family was thrust in the public eye a decade ago by the murder of her younger sister. This summer, she is about to take different stage as a member of the Jaguars ROAR. 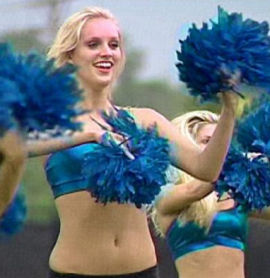 In the 11 years since Maddie Clifton was killed by a 14-year-old neighbor, Jacksonville has gotten to know Maddie’s parents and sister, Jessica.

Jessica said that while she and Maddie were close, her younger sister loved baseball while Jessica was into dance and makeup. Jessica said her desire to be part of The ROAR because it keeps her dancing while being involved in a sport she knows Maddie would love.

Jessica says Maddie loved sports, but she also danced because “I was big sissy, and she wanted to do what I wanted to do.”

Jessica said that she has been passionate about dancing since she was 7 years old, and that constant helped keep her going during the stress and grief of losing Maddie.

“It was very chaotic at home and there it was, very soothing,” Jessica said. “I feel that’s how I’m giving back to her. I’m living my life. I’m going at it.”

Four months ago, Jessica was one of 200 young women who auditioned to be part of The ROAR. She was one of only 32 selected.

“I freaked out. I was running back and forth around the parking lot, so I was very, very excited.”

In the days that Maddie was missing before her body was found underneath her teenage neighbor’s waterbed, the Jaguars paused during a game to ask for help locating her and people throughout the stadium wore yellow ribbons for her safe return.

Remembering that day makes being on the field of Jaguars municipal station even more special.

“She loved football, and for me to be out there watching that game and cheering them on, I think she would have loved it,” Jessica said. “And she would have thought it was the most amazing thing in the world.”

And she remembers Maddie.

“I drive pass her graveyard everyday and blow her a kiss and say, ‘Hey,'” Jessica said. “What makes me happy is I can get up and I can see something, just the wall, and I’ll start laughing because something happened there. Or I can look in the back yard and know that we had some of out best memories in the back yard.”

Jessica is now 22 and busy training to be a nurse. So in addition to 12-hour shifts at a hospital each week, she has three weekly practices with The RoAR.

But she said thinking of her sister makes her stronger, more determined and helps her strive to live life to its fullest.

Go behind the scenes of the Atlanta Falcons Cheerleaders photo shoot.

The ROAR of Jacksonville’s Kelli is back at SportsIllustrated.com 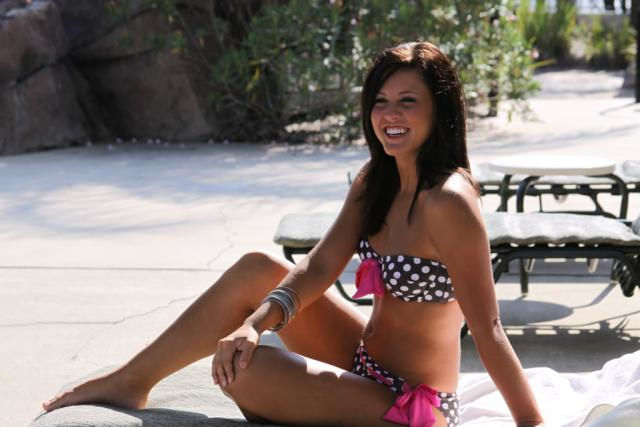 Earlier this month the ROAR of Jacksonville visited the Universal Orlando Resort to shoot their 2009-10 swimsuit calendar. The cheerleaders also appeared at the theme parks and even had time to check out all of the rides and attractions.

Check out all the photos here.

Read all the blogs here.