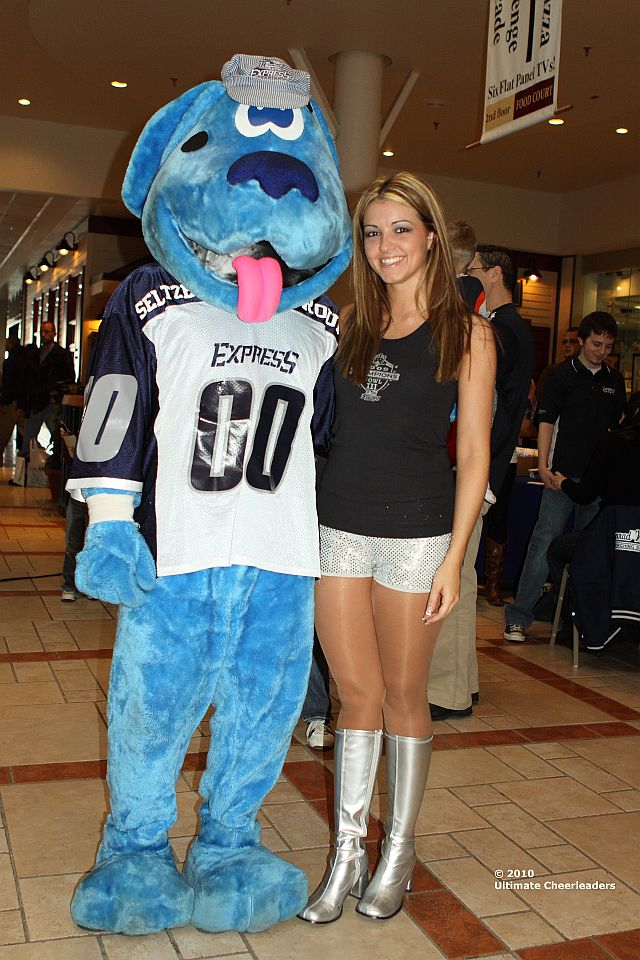 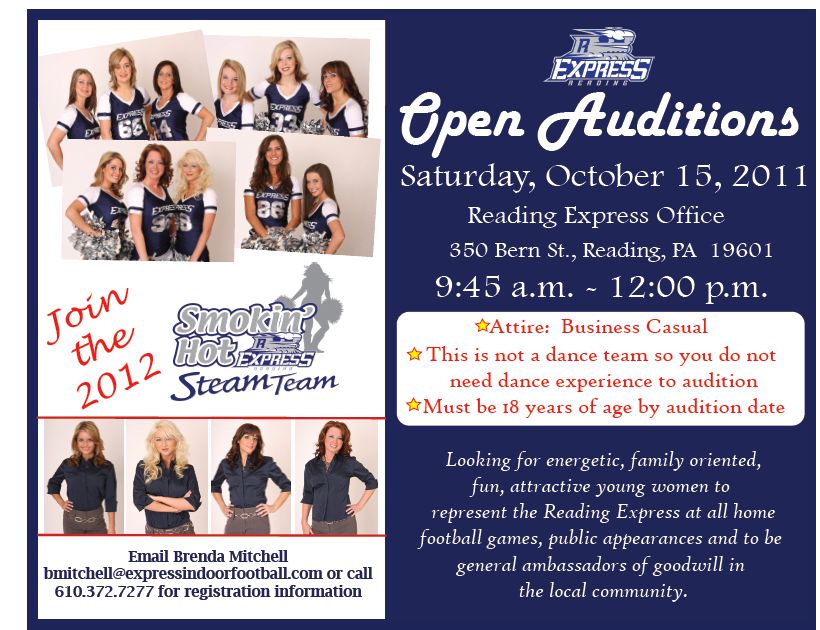 Berks County, PA – Jennifer Caputo-Pietrobone, 32, a professional dancer for the Philadelphia 76ers from 2003 to 2005, started the Academy of Movement in 2007 to coach and direct various local dance teams.

The Bern Township dance studio offers a variety of classes in addition to molding future professionals.

“It has been four consecutive years of coaching that at least one of the members of my team has been selected for either an NBA or NFL cheer or dance team,” she said.

In addition, Caputo-Pietrobone, Spring Township, holds a full-time job at Wilson High School as the health, physical education and dance teacher, where she has been the past 11 years.

“I taught full time when I was dancing with the Sixers,” she said.

The desire to get married, buy a house and start a family prompted her retirement from dancing with the team, but that hasn’t clouded her memory of what she found to be her favorite aspect of being a professional dancer.

As wife to Jarl Pietrobone, 39, who she calls “Super Dad,” and a mother to Jacie, 4, and Jiana, 15 months, she commits most of her weekends to directing and coaching.

“We do everything from choreographing, running rehearsals, deciding on costuming, selecting music – you name it, we do it,” she said.

Alexandra Plank, 23, Spring Township, a studio instructor at the Academy of Movement, helps Caputo-Pietrobone run her “tight ship,” having various roles with many teams.

In addition to directing and coaching the teams, Caputo-Pietrobone also runs the auditions and selects the girls, most of whom have a background in either cheering or dance.

While the semipro teams don’t offer payment, the affiliation can be invaluable for those who want to dance professionally, offering them good exposure.

“The girls have the opportunity on the minor league teams to gain experience for the major league teams,” she said. “That’s the incentive to working for no pay, just for resume experience.”

She is proud of seeing her girls reach the next level in securing spots on professional teams, winning stiff competition among 200 to 400 others who audition.

“It’s absolutely super rewarding to know that they will be able to gain the exposure and the experience of dancing at a professional level,” she said. “To most of the girls, this is a childhood dream of either being an Eagles cheerleader or Sixers dancer.”

The latest from Mid-Atlantic Dave who traveled to Reading for the Richmond Raiders-Reading Express game on May 14th. He sent us a few photos of the Smokin’ Hot Steam Team.

END_OF_DOCUMENT_TOKEN_TO_BE_REPLACED

Back in the late 1970s, professional cheerleading, especially in the NFL, exploded. Lots of squads were added, or “modern” cheerleaders replaced the older pom squads.

It was a sort of crazy time. Because it was so new, there was much experimenting going. One of my favorites was having the visiting team’s squad performing in uniform on the field. The Philadelphia Eagles Liberty Belles even traveled to Tampa to cheer at a playoff game.

This idea died off after a couple of seasons, probably around 1980. And now outside of the Super Bowl or the Hall of Fame Game, you don’t see it all. (One exception is in the CFL where provincial rivals the Edmonton Eskimos Cheerleaders and the Calgary Stampeders Outriders will cheer on the road once a year.)

Actually there’s another exception: this past Saturday night at the Baltimore Mariners-Reading Express game, where the Mariner’s Cheerleaders and the Express Smokin’ Hot Steam Team performed together during halftime.

Rehearsing in the tunnel before halftime

Held back this back a couple of days until after the Ravens made their official announcement of the new squad. 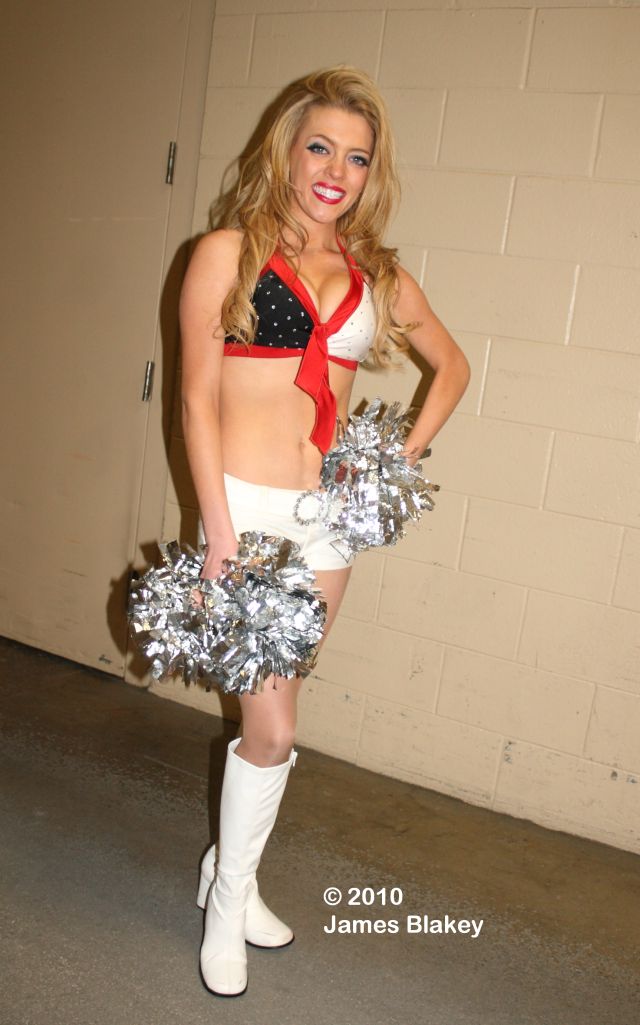 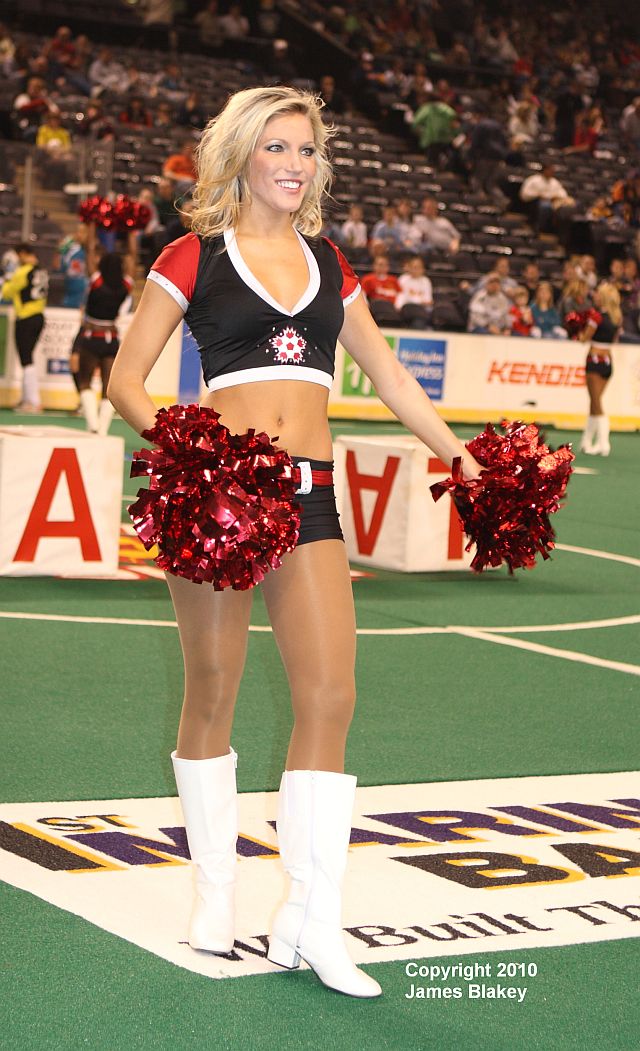 Megan was a Baltimore Blast Cheerleader. 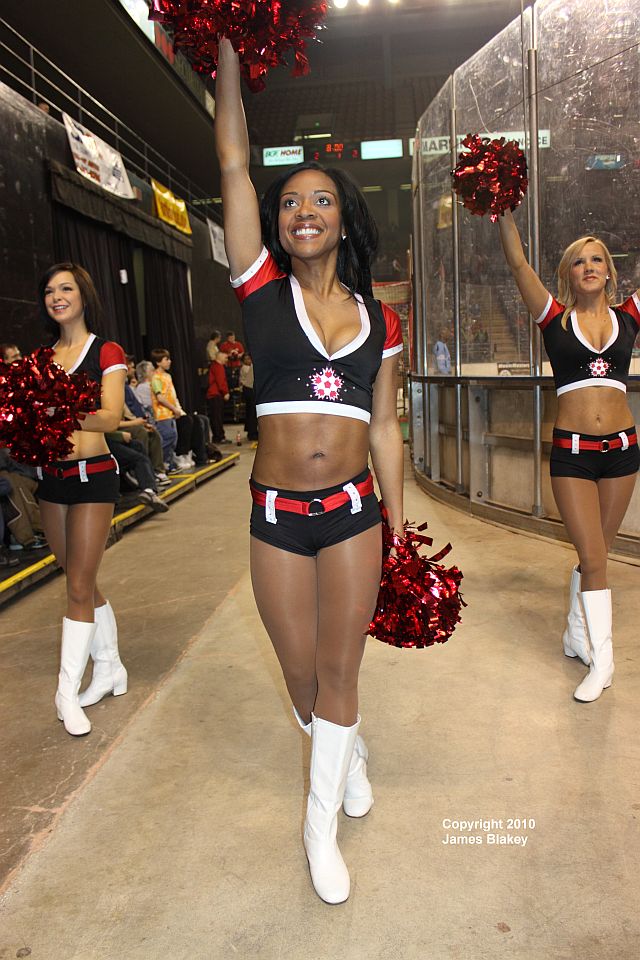 Keishawna was also a Cheerleader for the Blast

Congratulations to Stephanie, Keishawna, Megan and all the rest of the new and returning cheerleaders.

Last Saturday, Reading’s Berkshire Mall was the site of the unveiling of the 2010 Smokin’ Hot Steam Team. The ladies had a chance to introduce themselves to the fans, perform a few routines and helped younger fans in a dance contest.

The Steam Team will take the field at the Express first home game on Sunday, March 21st.

Yes, posting from me has been light. Still no computer, but here’s a peek of what’s coming once I get things fixed:

The Maryland Green Hawks Dance Team thrilling the fans at a home game in Rockville.

The KiXX Dance Team at the Liacouras Center for the Blast-KiXX game. 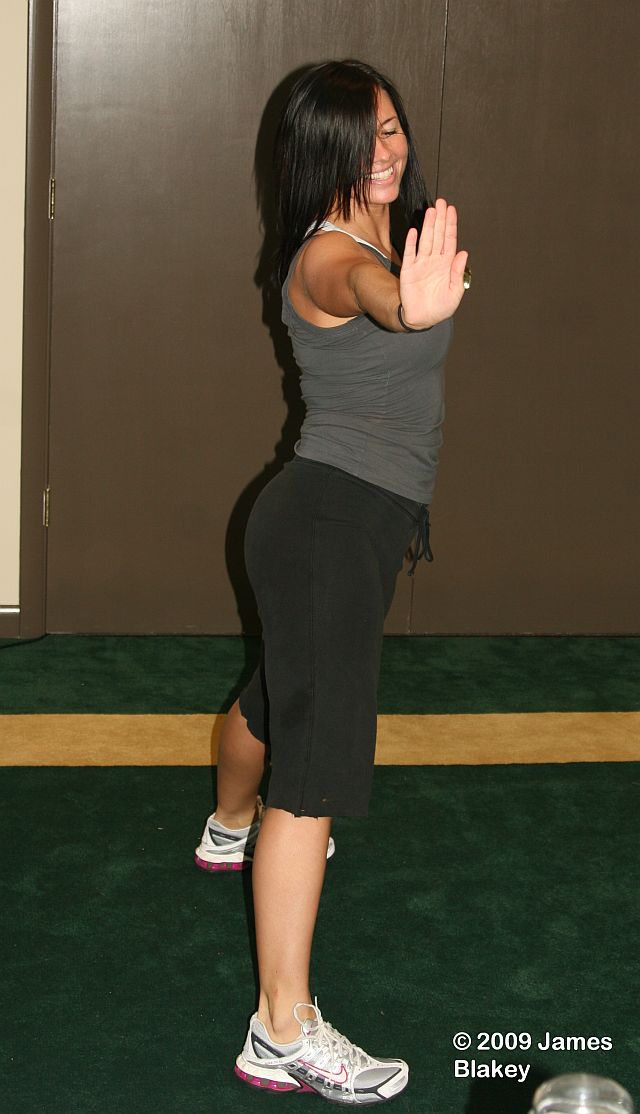 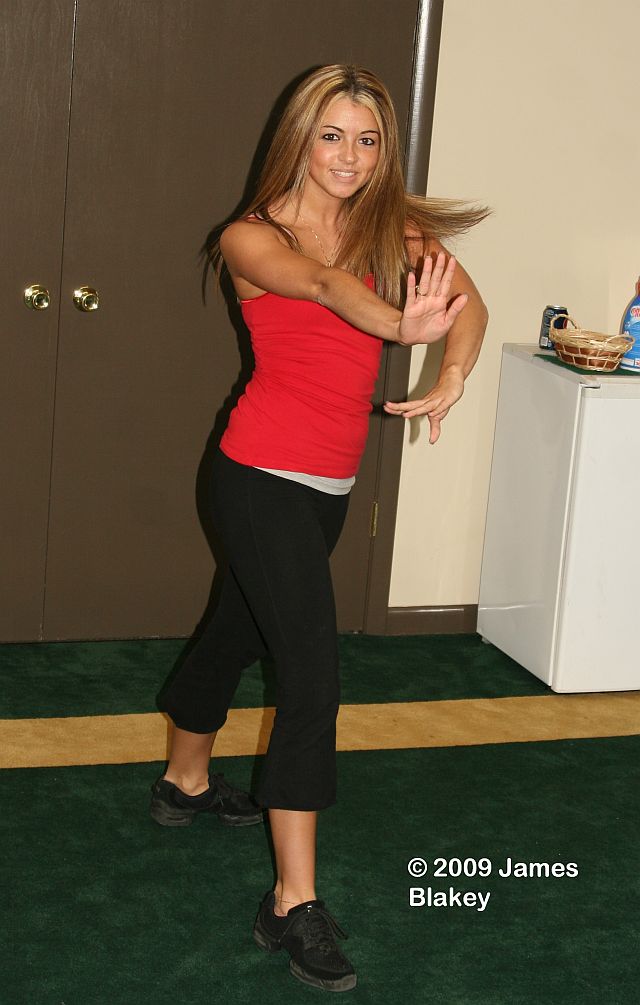 Disclosure: I was a judge for the interview portion of the audition process. 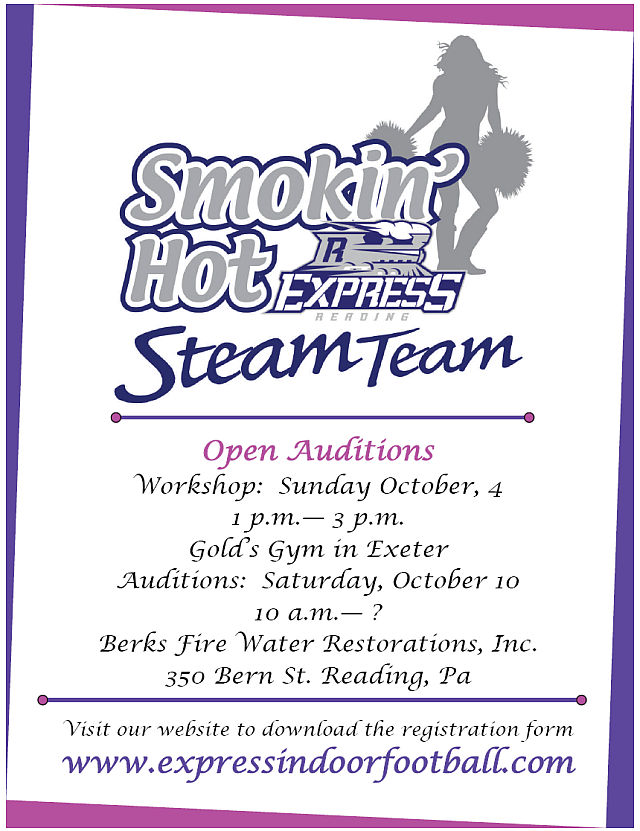 Hope to see you there!

A coupe of weeks ago Mid-Atlantic Dave was at the Sovereign Center in Reading, PA. The Express defeated the visiting Harrisburg Stampede, 44-6. Dave sent us these photos of the Express Dancers, the Smokin’ Hot Steam Team.