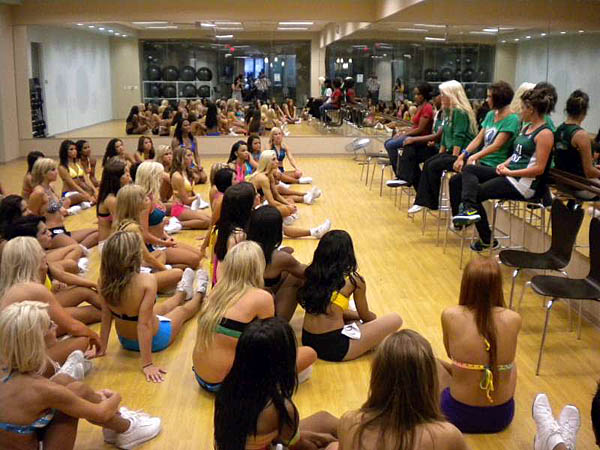 All weekend hundreds of ladies have been competing for a spot on the Dallas Mavericks dance team.
Aaron Smith
The 33 News
Video|Photos

Basketball season will be here before you know it. All weekend hundreds of ladies have been competing for a spot on the Dallas Mavericks dance team.

Melody Denoia is competing and says, ” I danced for the Mavericks from ’02 to ’06 so that’s a total of four years.”

Hillary Bordeaux also has experience saying, ” I was a professional cheerleader last year for a different squad but this is also totally different.”

Different because the routines change quickly with no notice, sometimes they have freestyle.

Alyssa Sarasani says, ” Its pretty intense because they teach at a very fast pace but the routines have been at a style that I really enjoy.”

Groups of five perform in front of judges. For some the last minute routines spell mistakes.

Laura McKie says, ” I messed up on the end which we just learned but I kept a smile on my face so hopefully they keep me around.”

Its pressure. but so is a schedule of forty games, sometimes three a week.

Just because you were a Mavericks dancer last year that doesn’t mean anything this year. Everybody got to try out every single year. It keeps them on their toes. While looks are nice directors say the chosen few will need more to wear the maverick logo.

About forty ladies remain after todays eliminations. The final team will be chosen on July 31st.

Make sure you check out The 33 picture gallery for pictures from the tryouts.