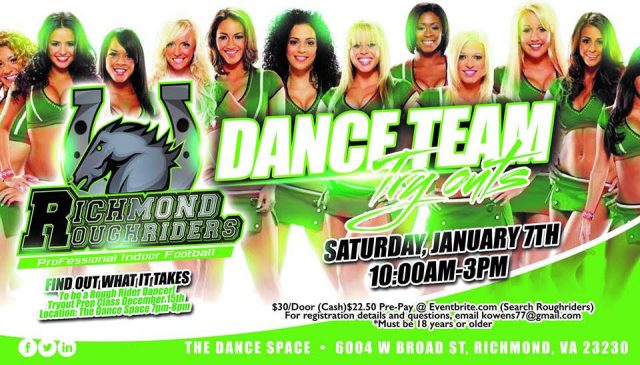 Richmond, Virginia has always been a bit small for a major league team, but the Richmond Raiders were blessed with a top tier major league quality dance team, coached by former Washington Wizards Dancer (2000-2003, Captain) and Washington Redskins Cheerleader (2005-2012, Captain) Kelly Allen. Well, in the topsy turvy wacky world of indoor football this spring, the Raiders are no more, but Richmond has a new indoor football team in town, and Kelly is now the Director of the RoughRiders Dance Team. Great news! Information about the prep classes (December 15th) and auditions (January 7th) are included in the graphic above, and we were thrilled to feature Kelly, singing her praises, at this link, previously at UltimateCheerleaders.